In my last post, I mentioned the sales I got in on as a part of Black Friday. Of the games mentioned there, I didn’t play all of them all that much. I did at least try them all, but I didn’t play the four games I purchased from GoG.com beyond their tutorials. Of those games, I liked Celtic Kings and Imperial Glory the best, and will probably pick one to delve into at some point. For this week though, I was concerned most with the following: Faster Than Light, Rogue Legacy, League of Legends, Call of Juarez: Gunslinger and God Mode.

Faster than Light:
I finally had a multi-day session with the game. I decided to stick with Easy mode just so that I could possibly make it far enough along to unlock another ship that could possibly make normal a little more do-able. The progression of these rogue-likes is so much different than games of old, or even the way traditional games work these days. Rather than playing to a save point and then returning to it upon death, you are constantly starting the same journey over and over, but earning something more valuable than gear — experience. That experience will allow you to progress further than before. The mechanics of earning something to advance further play-throughs (new ships in this case) makes starting over feel better than it would normally. Maybe I’m a sucker for punishment, but this is something that kept me coming back for more with games of my childhood, and it keeps me coming back today too. I managed to make it to the final sector of the game on this run over the course of the week, though I died while en-route to intercept the final boss. However, many records were set:

It was that experience of previous runs that lead me to such a great success this run. I learned to upgrade shields and that made a world of difference. Luck also provided me with better weapons than in previous games, and I took that luck with me to the bank. My reward for the run was the Engi ship, which I have yet to take out for her maiden voyage. Soon. 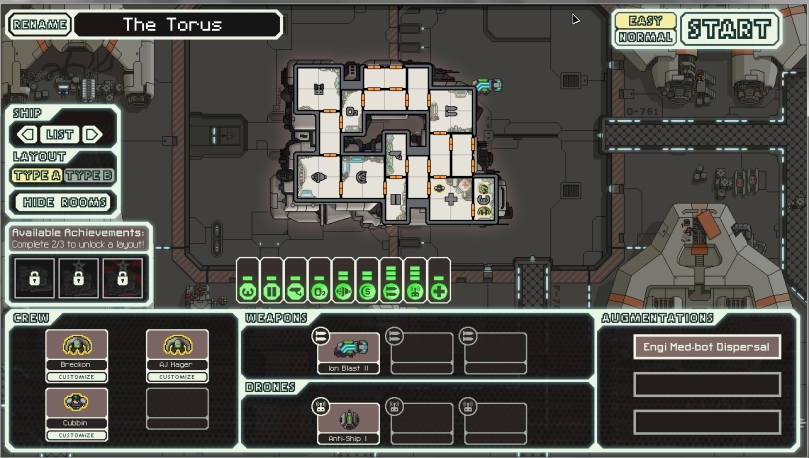 Rogue Legacy:
I have completely fallen in love with this game. When I was toying with the idea of buying it last Friday, I could only look at the video and be reminded of the countless hours I spent playing Ghosts ‘n’ Goblins and Ghouls ‘n’ Ghosts on the NES and Genesis respectively. Really, the similarities stop at the pixellated graphics and the overall feel of the game.

The mechanics of this game are definitely rogue-like, where the castle your adventure takes place in is procedurally generated, and death is permanent. There are no lives. But Rogue Legacy takes this a step further in that death is a tool for progression. You are the heir of a Legendary Hero. When you die, your heir will take up your crown, and delve into a new version of the same castle. This means you get to keep all of your equipment and runes and skill points as they were bequeathed to your children. Upon death, you return to the title screen, where you are prompted to choose your heir. You are then taken to a great wall of portrait paintings of your family line, and the newest addition to the line will be your next character. There are four classes to choose from at the beginning of the game, with more unlockable classes in the skill tree. You can choose from one of three options for your heir, each with a name, class, spell, stats, and negative “birth defects.” Not all heirs are created equal, and sometimes you will have to choose the lesser of three evils.

Some of the birth defects aren’t so bad. O.C.D. gives you MP for smashing breakables, and there are a lot of breakables in the game. A.D.H.D. makes your character move faster. But some of the defects are detrimental, and quite annoying. Nostalgia makes the game a sepia tone; similarly there is a “colorblind” grayscale version. Dyslexia makes things harder to read, and Dementia disables your map. Still, this all adds a dimension not seen in the classic games from generations past. The skill tree adds another level, and in it you can upgrade your character, but also open new classes, which can make playthroughs a bit easier.

This stuff isn’t cheap though, and as of right now I’m on my 26th heir, only having beaten the first boss monster once. It will take some time to build up to a level to be able to clear the whole game, this is for sure. But it took me months, maybe even years to get good enough to beat the GnG games I mentioned from my childhood. So no harm, no foul. Get this game if you are a fan of these types. I would recommend using a gamepad though, as platformers aren’t great with a mouse/keyboard. If you’re like me and don’t like the Xbox controller, there is also software that you can download so you can utilize your PS3 controller, which is what I did.

League of Legends:
My play time has consisted of getting my first win of the day and then logging out. I’m really looking forward to the new featured game mode, Snow Down and further preseason changes, so until then I won’t have much to say about the game. I did decide to roll the dice with a mystery gift and ended up getting the Full Metal Jayce skin, which is normally a whole lot more than 490 RP. I’m glad Riot gave us the opportunity to self-gift, because I don’t really know too many people in-game that I’d want to spend money on, but the gamble from the mystery gift is worth it. At the very least, you get a skin that is normally 520 RP for 490. Best case scenario you get an 1820 RP skin for 490, which is what happened for me. Worth.

PS3:
I spent most of my time playing God Mode on the PS3. I really like this game in that you get to mow stuff down and it’s light on story. Like the Call of Duty multiplayer, you get experience and gold with which you upgrade and customize your character. Mine is starting to look pretty cool, and the upgrades to the weapons are making the game easier, even when I can’t find someone to play with. However, as of late I have been finding random people online at random times, and that has made the game much more fun. I still have yet to play a game with a full party of four, but even with just two people it’s good fun. The only detriment to playing with others is that your lives are shared, so if you have a weaker player, you can suffer the consequences, even without dying much. My first game the other day I managed to beat a level and me and the other player only died once each. The next game I got into was with a different player, and he died 7 times to my 2, effectively causing us to lose. This is where I need more people on my friends list to play the game with, but that’s life.

I got a bit more time in with Call of Juarez, and it’s fun, if nothing else because the setting is different from most games out there. Aside from the Read Dead series, there isn’t another western themed game I can think off of the top of my head. Though it isn’t session based, I still feel like I can drop in, complete a chapter or two, and not play again for a while. Somehow, I’m turning into the most casual of gamers, where I don’t complete anything and add more games to the collection than I can play. Speaking of which:

On the Horizon:
The first round of December’s PS Plus dropped today, and along with the free game Grid 2, there were quite a few sales. Of what was on offer, I pulled the trigger on this year’s weird TV-show cross-over MMO Defiance, and the 2-d Minecraft-like Terraria. You may recall I had played the demo of the latter, but never bought it for the asking price of $15. Between the two, I spent $6.25 so I don’t feel like I’ll lose out on much if I don’t really get into either. I just can’t pass up a good deal. I’ll go over my impressions of these in the coming week.