No, it’s not the newest movie from director Michael Bay — though it does have plenty of explosions.

Broforce is Free-Lives’ still-in-development action platformer. The humor supplement alone is what intrigued me, but watching a video of the game in action really sold me. Fully destructible terrain? Check. Awesome Bros? Check. Imagery of my childhood heroes in all their glory, plus blood, guts and did I mention explosions? Check. This game is a winner in my book.

The pixellated graphics are becoming a standard for the Indie games revolution, yet the Bros are very easy to pick out, and their Bro names are good for a laugh. There’s a laundry list of play modes, though the real meat and potatoes of the game is in its campaign.

Starting out, you’ll be greeted with a Campaign map, which is basically just a level select, though as you complete missions there is a bit of choice in where you go next. 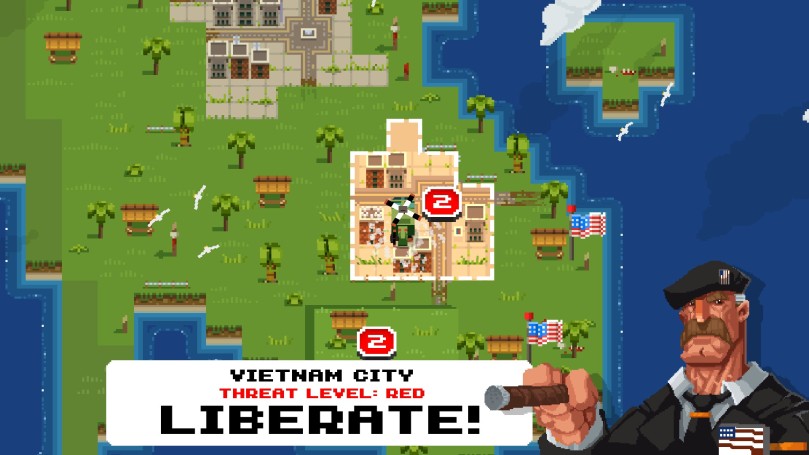 As dictated by the map, if your chopper is flying over a jungle area, that level will have jungle terrain, the same goes for cities and whatever other devious ideas the devs come up with. To start you are in the jungle, and as you clear levels you can only proceed to adjacent ones. Pictured above, I had already cleared a couple of the jungle levels. The game ramps up the difficulty as you go — the maps and amounts of enemies grow larger over time. It gets to a point where some actual strategy comes into play as well, despite the first few levels not requiring much thought besides pulling the trigger. Each individual Bro also comes with their own challenges, as they all have their own unique weapons and special abilities. 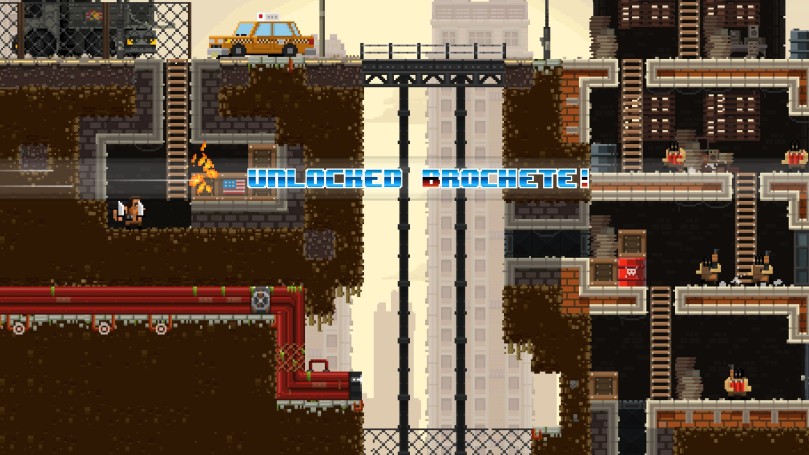 While blasting through the levels, you’ll come across other Bros who have been captured in cages. Releasing them gives you a free life, along with changing you into a new random Bro from the pool you have already unlocked. Unlocks come from getting rescues; more and more Bros eventually fill your pool. My favorite so far is definitely the Boondock Bros (The Boondock Saints), who’s special ability summons an AI controlled Il Duce. Runner up goes to Ash Brolliams (Ash from Evil Dead), complete with Boomstick and Chainsaw arm. Loads of pop culture references here.

Soon enough you’ll have played through enough sub-levels to come across a boss. These baddies are much tougher than the normal terrorist cannon-fodder, especially because one stray bullet or explosion can kill.

The screen actually drops into a cinematic theater view when stumbling upon a boss, which is a nice touch, albeit a little annoying when you die repeatedly. And die you shall. But soon enough, with the right Bro, you’ll get the job done.

Sometimes it takes destroying half the level, but as long as you blow that fucker up, who cares? Also, explosions. Another cool feature is the ability to literally scale any wall using a knife. So even when you do eventually destroy all of the walkways nearby, you can utilize floating ladders and walls to get to where you need to go. Sometimes, there are other ways to traverse, such as the zip line, which everyone knows is the only way to travel when you’re an 80s action hero.

And then just when you thought the level was going to end, surprise! Boss fight! Oh yeah, and more explosions.

That guy was a bitch! He would not stay down. But my Bros had my back, and eventually we prevailed. I’m really looking forward to seeing what else can be done with the game. All of the modes are tagged as “alpha” at this point in the early access, so there is much to be revealed. Going through the list I can tell you that all of the game modes are strictly local co-op for now, but I’m sure it is part of the plan to include all modes in online play. As of right now, you can play through ten levels in online co-op, but also play the campaign, deathmatch, and a couple of other race-type modes locally. Up to four players can play locally, but I don’t see that working on a PC, so I firmly believe these features will be added to the online mode. Lastly, there is a level editor included, and it seems pretty robust (enough so that I really had no idea what I was doing), which means the Steam community will be adding content regularly.

There were concerns regarding the lack of female characters, and those along with other features to be added are discussed in a great write up by Polygon (which is actually sort of dated at this point).

All in all, I’d pay money for this game, and would love to play it with friends.