This is part of my playthrough of Shadowrun Returns. The entire series can be found on the Ongoing Series page.

Apologies, this is going to be a bit long, as it encompasses a couple of sessions, and I wanted to cram it all in because I haven’t posted about the game in a while.

So, off to the NTSB warehouse. A quick cab ride gets me there, but when I arrive, the gates are closed. A lone guard isn’t helpful, despite my insistence that I’ve been summoned by the authorities, who are inside as we speak. 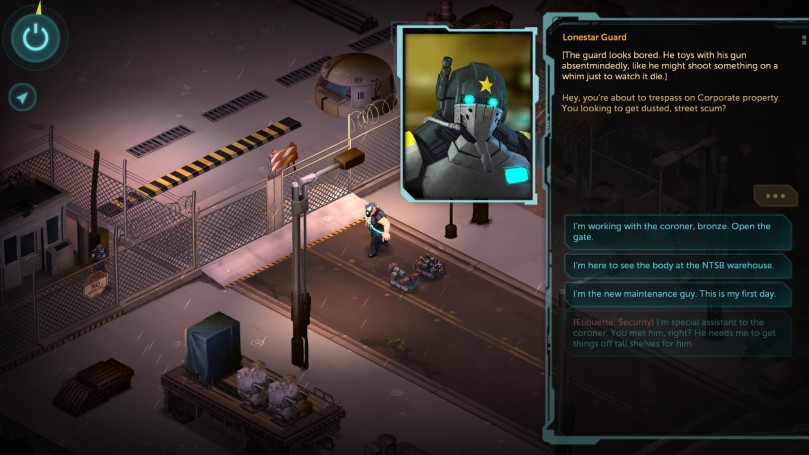 I had a feeling there’d be a way to distract or bribe him, and it turns out there was. It wasn’t exactly the approach I’d have thought of, but it worked just the same. 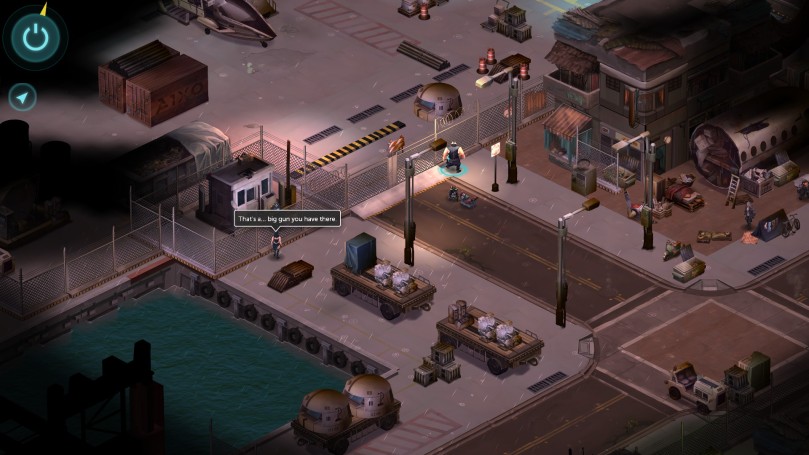 If you aren’t getting the innuendo, well, perhaps you should ask your mum and dad about that. This “distraction” allowed me to grab the ladder you see on the far right, and climb over the fence. Once inside, I found Officer Aguirre, Dresden and others. Another crime scene indeed. 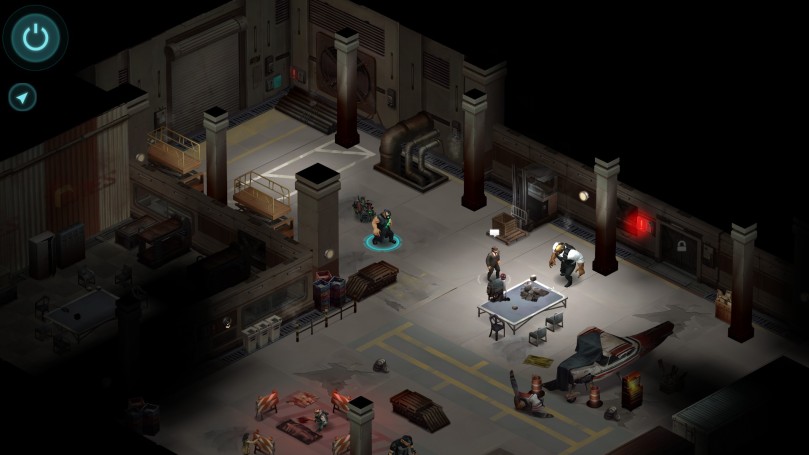 It was brought to my attention that the victim’s sister was present, so I spoke with her as well. Shannon is her name, and she wants to get to the bottom of the murder. She asks me to grab some items with spirit energy (or something to that effect). I do so, but then The other cop, McKlusky busts in and tells us it’s time to go. I agree to return to the warehouse that night with Shannon. 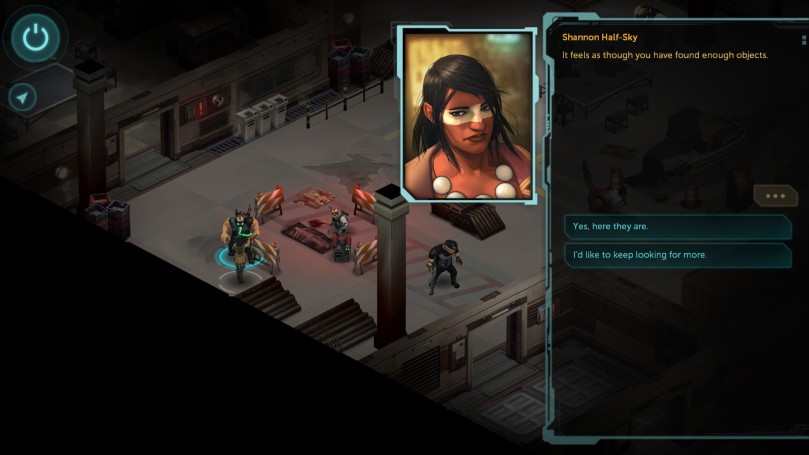 First though, I have to kill some time, and gather a crew for the night’s mission. Back to the Seamstresses Union. Once there, Cherry Bomb (the bartender) alerts me that Sam’s sister Jessica is present and wishes to speak with me. Basically she wants to bury her brother, and the investigation is preventing that. She comes across as kind of a bitch, and keeps mentioning her “new family.” 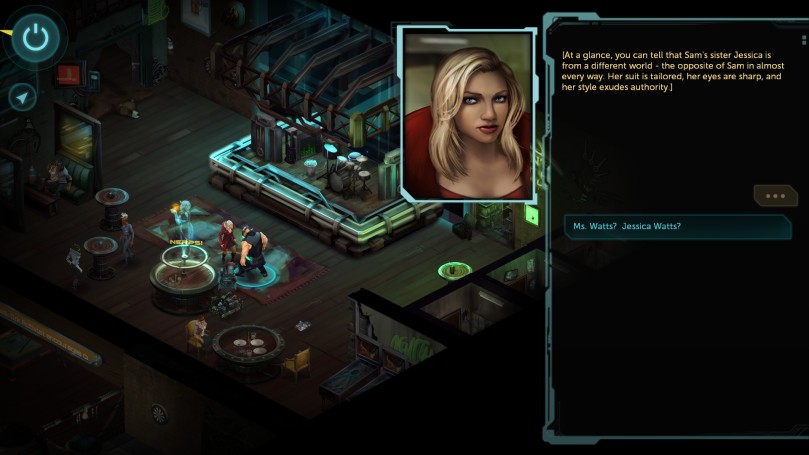 After running her off, it was time to talk to Mr. Delilah, who is in the business of hooking up runners like  me with like-minded individuals. I.E., mercs for hire. At this point I have some choices to make and a nifty new interface to play with: 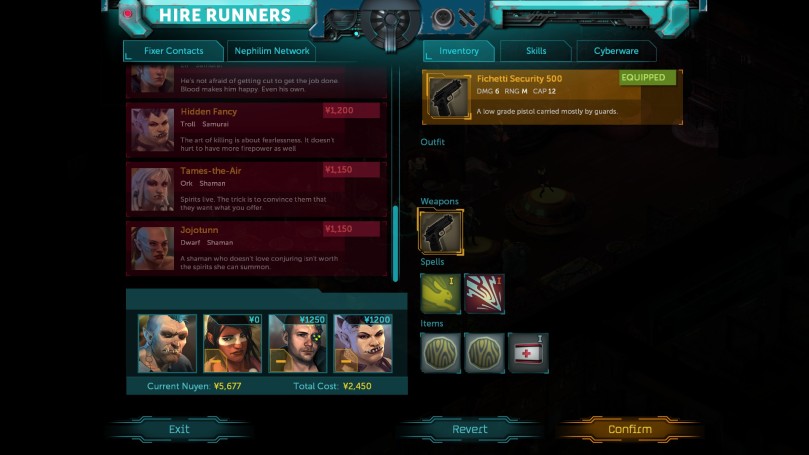 I end up with the group pictured, which includes me (Rigger), Shannon (Shaman), a Mage and a Street Samurai. A balanced party if I do say so myself. After the hiring, the group is whisked away, back to the docks. Turns out we weren’t the only ones interested in that warehouse crime scene. A group of mercenaries have already busted down the gate, and attack us when we enter the yard. 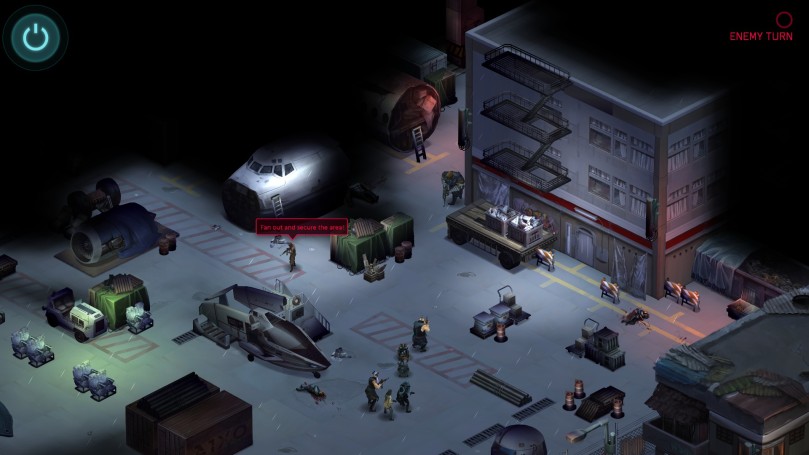 The fight goes pretty easily (as most have to this point). We head inside. More goons. More fighting. After killing the last of them, I find the “paydata” that the runners were after. Had something to do with a plane crash, and apparently someone didn’t want the data getting out. 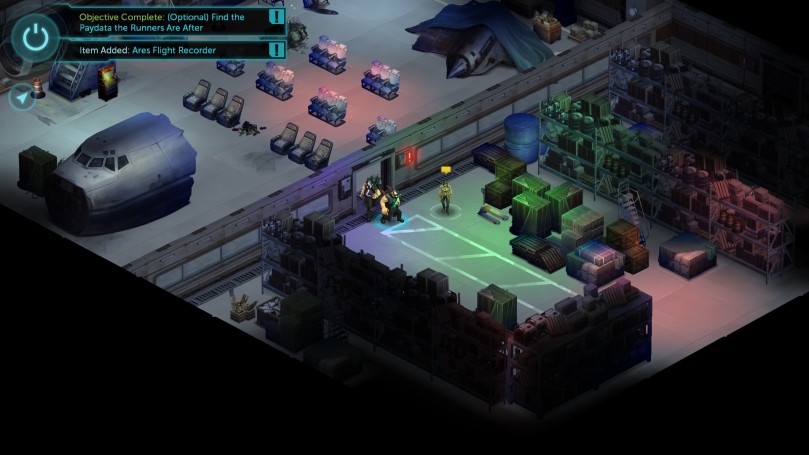 Using the items that you found for Shannon earlier, she summons a spirit from the plane crash, a spirit who could have been witness to the murder that occurred the night before. The spirit filled me with a vision, and in that vision, an Elf and Troll are seen. Knowing who they are is impossible.

Heading back to where the body was found, I do find some DNA evidence, which might come in handy to identify the Ripper. Back to the Seamstresses Union, once more. Mrs. Kubota and her employees are all in the back, as it is now late and the patrons have left for the night. She advises me to seek out David Fry down in the hideout, as he might be able to scan the DNA evidence. 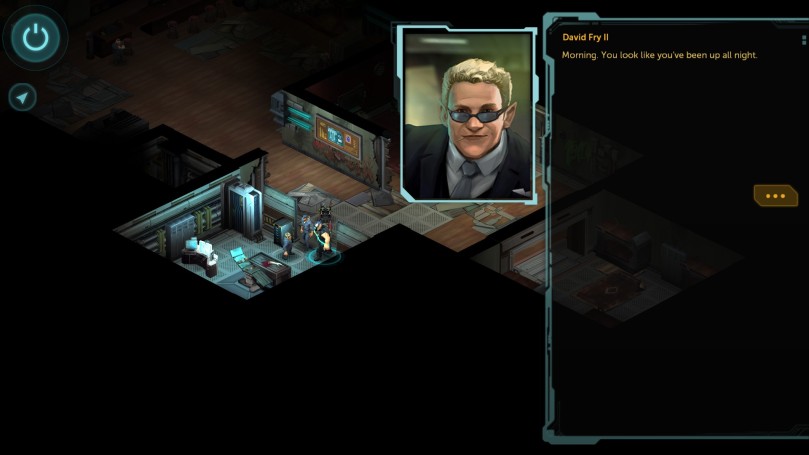 David and Johnny Clean are both present for the conversation. David agrees to handling the DNA scan, and Johnny proposes hacking to find more information about the Ripper. Hacking doesn’t work like you would think in today’s world. No, instead of using a computer terminal you literally jack in to cyberspace. Since I didn’t pick a decking class, nor had I put any points into the skill, this was done by Johnny alone. I “followed” along by piggybacking (meaning instead of having two characters in cyberspace, I only had one). 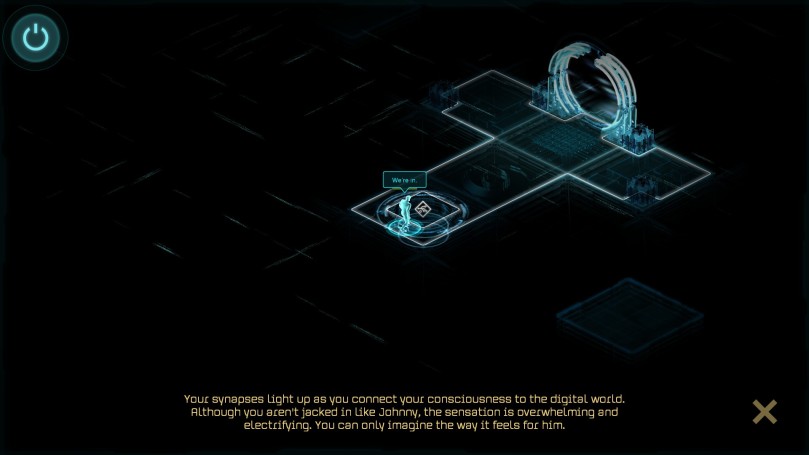 Decking was an interesting experience, but was basically normal gameplay with the graphics above. Deckers have abilities that function much like magic, and cyber entities try to attack along the way. Combat and non-combat controls were identical. Fighting our way through the matrix, we eventually found the evidence we needed. 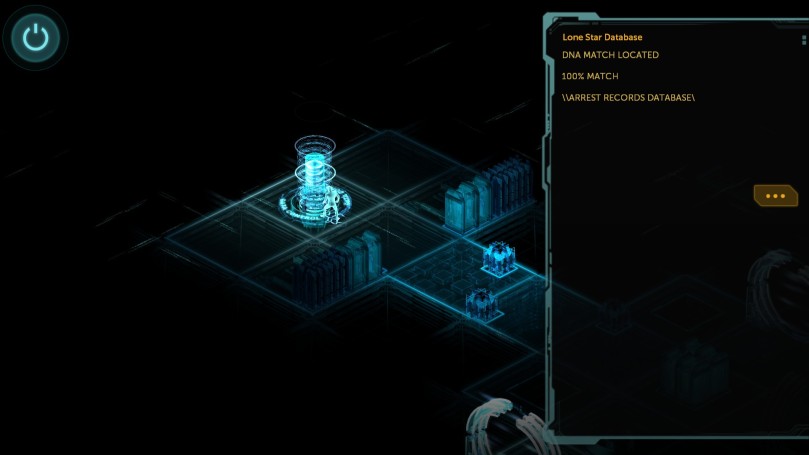 Turns out that the Ripper is actually an ex-mental patient (in that he’s still batshit crazy, he just got released somehow) who is posing as a mental health doctor. Oh the irony. His lists of arrests and other tidbits of information paint a really negative picture of the character. Soon enough, we’re back in the real world.

Also, by now most of the vendors have repopulated the place, and I got some fancy new gear, including new drones!

Now that we knew the Ripper’s true identity, it was off to the Mercy Mental Hospital to find Dr. Holmes. Upon arrival, the receptionist tells me to wait in the cafeteria while he pages Dr. Holmes. I do a little exploring (which amounts to only a couple of rooms worth) but leads me to a dead body and severed arm. I find a ring on the finger, this is later given to one of the patients, who had been friends with yet another victim, albeit under the guise of being “legal” care. Soon enough I’m being paged to meet up with the Doctor. 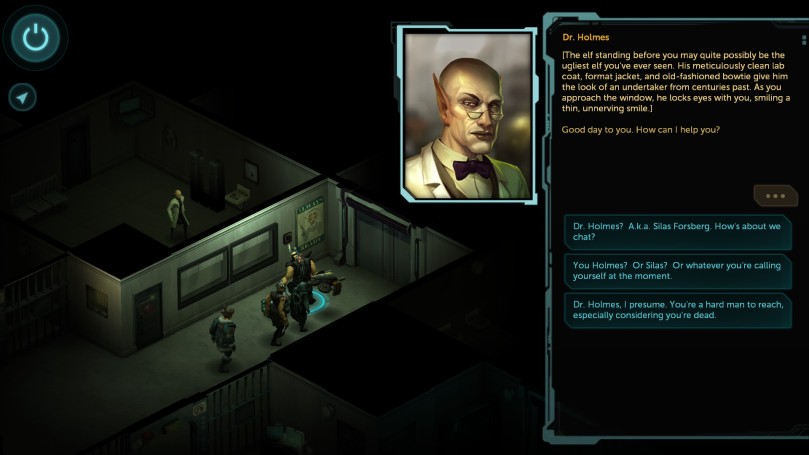 Ugly bugger. Of course, as soon as I let on that I know what Dr. Holmes has been doing in his spare time, he turns hostile, and guards flood the area. Back to my favorite part, combat! I think I failed to mention that I had brought mercs with me, but yeah, I had a full group. We fought through several areas, killing guards and patients alike, as the good Doctor decided to release all of the violent ones. 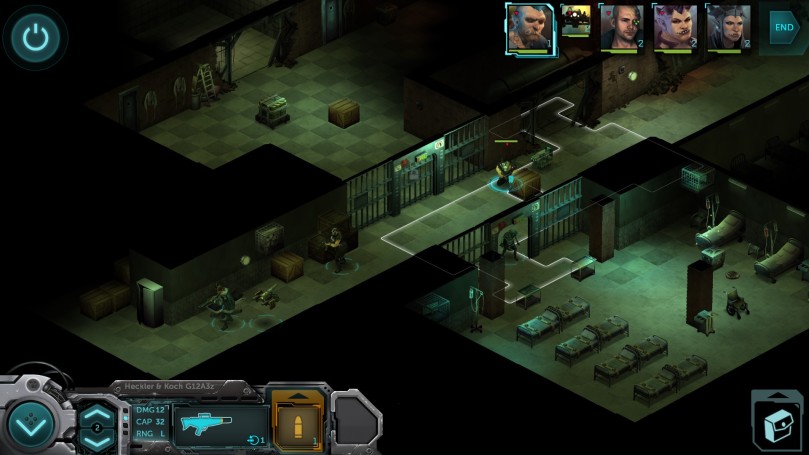 Finally, we had him cornered. However, he still wasn’t alone. Unfortunately I didn’t snap a shot of the huge augmented beast that I had to take down, which serves as what I assume is the mid-way boss (I mistakenly thought this was going to be the end of the game, but found out shortly that there was more to do), but this is where the difficulty first ramped up. After the big guy was down (I still had no deaths), it was time to deal with Holmes. 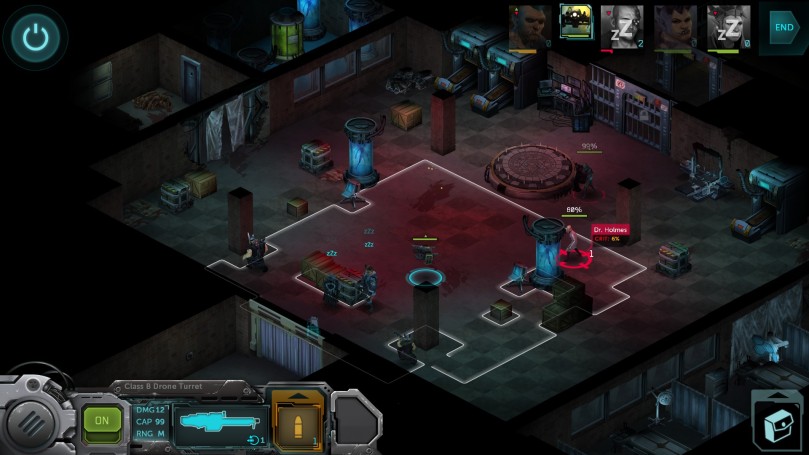 After he dies, we can explore the room and surroundings a little. Some notes and items are found, along with a couple of the Doctor’s experiments, one of which is obviously a patchwork humanoid at this point. She offers pleasures beyond imagination to (YOUR NAME HERE). What a depressing place, and a sick bastard. Time to head home. Back at the Seamstresses Union, Johnny Clean tells me that Sam is going to be buried, and the funeral is basically about to happen. I head to the cemetery. 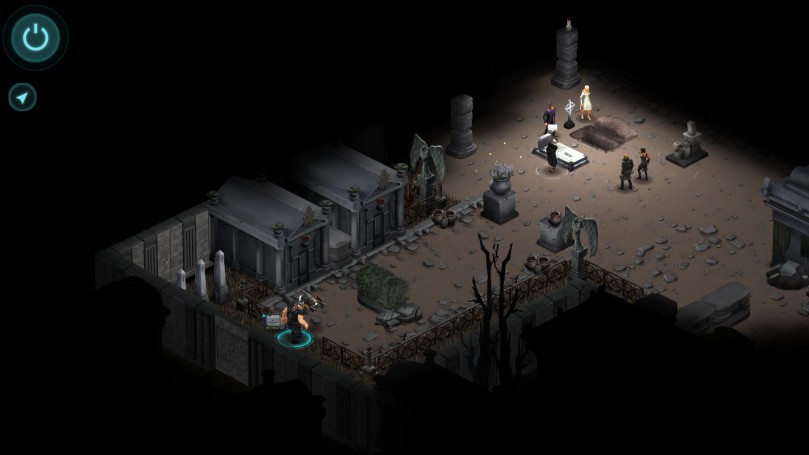 Coyote and Jake are present, along with Jessica and some Elf lady that I hadn’t seen (or remembered) before. After a short dialogue from the priest doing the internment, I start to question Jessica’s motives in all of this. She admits to having hired the Dr. to “get back” parts that had been donated by her mother. She didn’t agree with organ donating. Her mother deserved to be whole and Sam was one of the recipients of their mother’s organs (along with all of the other victims of the Ripper). She doesn’t want to talk anymore and runs off, while her Elf friend calls in more mercs. They seem to be the same ones that were at the warehouse earlier. Coyote and Jake jump on my team, and at this point my drones are pretty bad ass, so the fight isn’t too difficult, although a bit long. Team A and Team B of mercs, and then Ghouls start rising from the grave. Crazy stuff. After killing everything in sight, I question the leader of the mercs, who predictably gives me nothing. 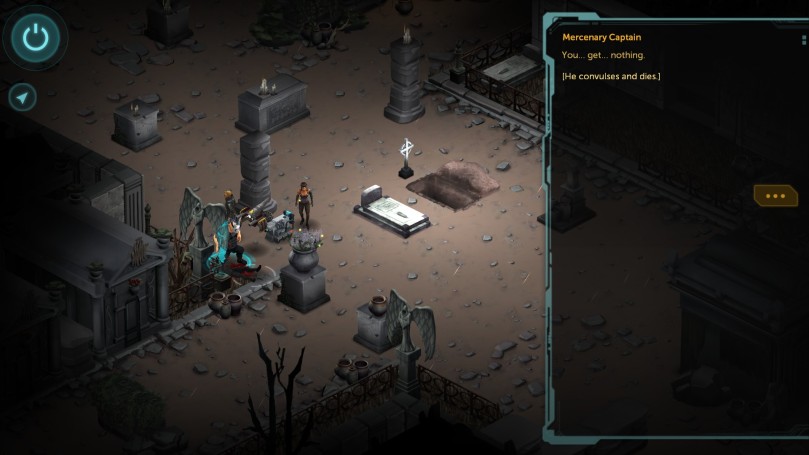 Coyote seems to know who the Elf was, and mentions the Brotherhood, which is a religious cult of sorts. I believe I mentioned them earlier. So, we’re off to dig deeper into the mystery, and to find out why the Brotherhood was motivated to support Jessica in what she had been doing. 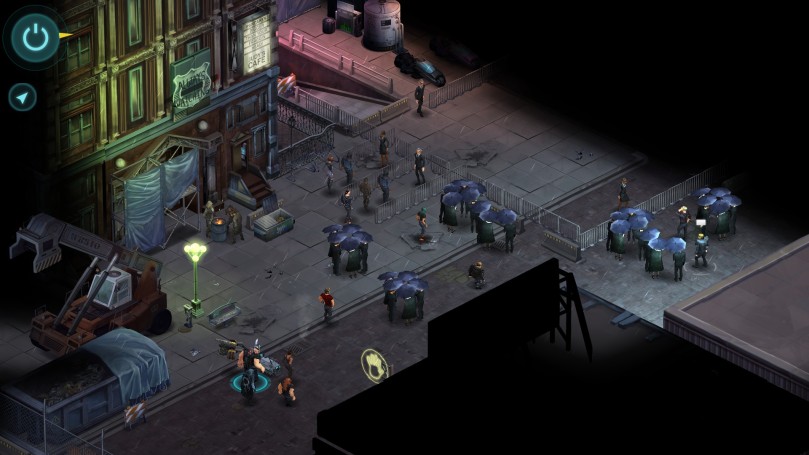 Stay tuned for what should be the last post in this series. I think I will have completed the game with one more good session.