The Curse of Naxxramas expansion for Hearthstone was officially announced  a while ago. While not a whole lot of concrete information was immediately available, there is a Hearthstone Wiki that collects what is known thus far. Of the 30 cards that are being introduced, it has been said that they will all be earned by completing “wings” of the expansion, releasing incrementally. So 30 new cards for all, that is once all of the content is released. The first wing is supposed to release for free, and the other wings can be purchased via RMT or in-game gold. This is why I haven’t been running Arenas much, and just playing for quest gold as of late. I’m saving 1k towards this expansion, as I am hoping that’s a good starting point at least. The guarantee of new cards is something I look forward too, as the randomness of the packs earned is a bit of a turnoff sometimes. My last Legendary card was Gruul, and that was over a month ago (and not that useful of a card either). I can’t remember the last Epic card I found in a pack, though I know I crafted one not too long ago. Either way, when you get to the point that you have the bulk of the existing cards, its seems that getting cards you need from packs becomes a thing of the past. Sure they can be disenchanted into dust, but it takes so much dust to craft legendaries and epics, it’s ridiculous. I guess it’s better than it being too easy to collect everything, because then I probably wouldn’t play at all. But I digress.

14 cards have been revealed at this point. Of those, 9 are class specific, and the rest are neutral. There won’t be anymore class specific cards, so we’re waiting on more neutrals. I’m going to do a quick overview of these new cards, and throw out my opinions. Here goes. 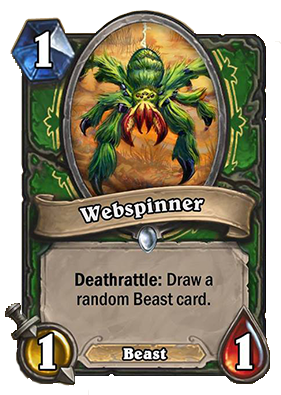 This card looks to have a place in my Hunter deck right now. As it stands I focus on control and beasts. This is a cheap minion, and the best Hunter minions tend to have a high cost. This expansion is focusing on the Deathrattle mechanic, and I’m glad to see they found ways to make it work with more than just neutral cards. This is a card you want in your hand on turn one, because you can immediately put a body out there, and if it gets pinged right away, you get a new (better) beast card in your hand. If nothing else it helps to set up combos, and I love my hunter combos. Verdict: Want 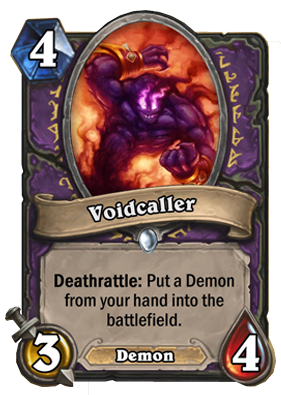 I love this card. Not only is a 3/4 a beefy minion for 4 mana, but the deathrattle effect is nice, particularly if you run a lot of demons. This might make something besides Zoo viable. I used to try and run a Demon-only deck with my Warlock and it didn’t have much lasting appeal. The addition of more cards like this would make me change my mind. Can I have a Demon Zoo deck now? Please? Verdict: Want 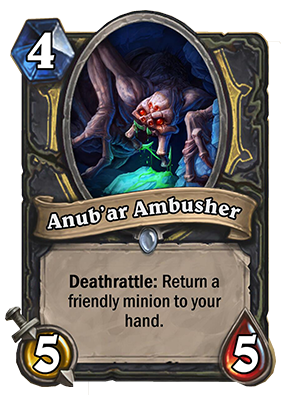 I’m torn here. On the one hand I can appreciate a 5/5 for only 4 mana. That’s in line with what I expect from a good card. But the text is confusing to me. If this minion dies, it returns a friendly minion to your hand. It doesn’t specify if you get to choose which minion. That could be great for combos in some cases, but for the most part it seems like it could backfire too easily. I guess we’ll have to see how it works in-game before I can make any judgement. Verdict: Undecided 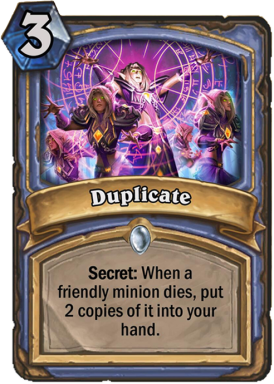 This card is ludicrously powerful. I see this being in most mage decks as soon as people can get their hands on it. When any of your minions die, you get two in the hand. What more can I say? The usefulness speaks for itself. Verdict: Want

It appears that Warriors will remain the dominant force when it comes to weapon cards. I like the fact that this is a soft counter for the Acidic Ooze that ruins your day, destroying all of your weapons, but one damage isn’t going to kill much. However, it can set off a nice combo with any cards you have out with the enrage mechanic. If it doesn’t get destroyed, you can still set up this sort of combo yourself, by timing your last whack. I like the possibilities. Verdict: Want 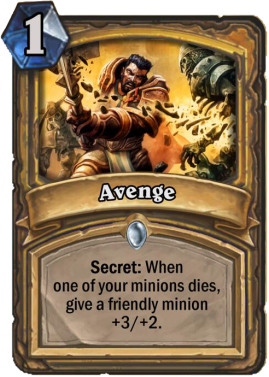 If this isn’t overpowered I don’t know what is. This is in line with the Mage’s new card, when it comes to power level. Obviously this won’t help if you only have one minion on the field, but in every other case it beefs up another minion with a solid buff. I don’t really play the Paladin all that much and don’t really care for them in general, but this card would find it’s way into my Pally deck. Verdict: Want

This card is pretty meh, unless used in conjunction with Starfall, and hopefully you’re not rocking some awesome minions at that point in time. Then again, Druids are kind of meh in my opinion, so this card is inconsequential. Verdict: Don’t Care

I detest Shaman’s. It probably stems from one of my friends nearly always beating me with her Shaman deck (you know who you are). I just always seem to have trouble against the class in general, and this card is situational, but still powerful. Another one of those I don’t care about this cards. Verdict: I hate Shamans 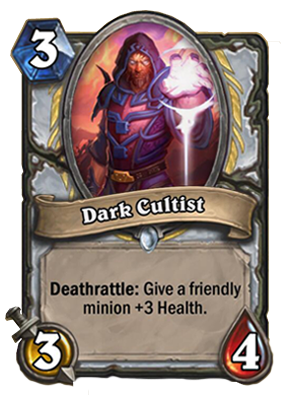 The only class I like less than Shaman is Priest. I don’t know what it is about this class, it has a lot of mechanics and cards that I really like, but in practice they just fall flat for me. I seem to always get Priests who actually know how to maneuver this deck to victory in matchmaking though. Frustrating to say the least. Oh yeah, the card. A 3/4 for only 3 mana that also gives some health to another minion on death is pretty OP, but who knows how this will synergize with existing cards. Verdict: I want to like this, but just don’t know 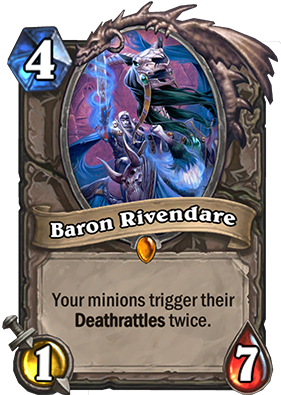 The only Legendary revealed thus far, these are supposed to be earned by beating the bosses of the solo campaign. I can see this one doing well in most decks that have some deathrattle mechanics, but I personally see this one fitting into my Warlock deck. Not only is a 1/7 great for survival (particularly if you throw a taunt its way), but that effect is truly legendary for the price. This is better than some of the current legendary cards, for sure. Verdict: Want

This one is basically a lesser version of Gruul, with a more manageable point of entry. A 2/2 for 3 mana isn’t outstanding, but being stealth it will either draw some AOE, or be left alone until he is beefy enough to attack with. I really like this card. Provided you can get it out early and avoid AOE it’s gold for the cost. Verdict: Want 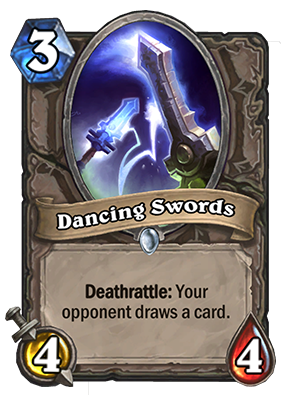 This is in-line with most of the Warlock’s self-defeating mechanics. A 4/4 for 3 is a good value, but your opponent will most definitely attack this first for their extra card. One of the few deathrattle cards that would not make sense in conjunction with the Baron. Still, I can see this fitting in a Zoo deck. Verdict: Undecided

Another great card for the value. Some people might avoid this because of its situational nature, but I find it intriguing. Not only does it have the potential to grow into something bigger for a cheap cost, it can be used in conjunction with taunt for some protection, or it can eat a silence that would be better used on something more powerful. I’m a fan of cheap cards with neat effects. Verdict: Want

This card isn’t back, as it is a 1/2 for 1 mana, which means it’s safe from a mage ping for at least a turn. However, unless you are building a deck centered around the deathrattle mechanic, it’s taking a spot that might be better suited for something else. Considering this whole expansion focuses on death though, it might prove to be pretty viable once we know more about the remaining cards. Verdict: Undecided

I think this expansion is going to breathe much-needed life into Hearthstone for me. I have found that I was starting to grow tired of the game, and rather than making me wait a long time for new stuff, Blizzard is already ramping up for this release. I am excited to see the rest of the cards, and I’m excited to try and build a deck centered around the deathrattle mechanic. I will review further new cards when they are released so stay tuned for that.