We now return to your regularly scheduled program.

Apologies for making the last State of the Game about movies n such, but I really didn’t game much so I had to fill it with something. I got back to gaming this week, revisiting most of the usual session based games, rekindling an old title, and jumping into a new one. I also tried a game that I picked up for free, but was less than impressed. Let’s start with that one, just to get the “bad” news out of the way.

Sniper Elite v2
So Steam offered this game for free for 24 hours the other day (probably to ramp up sales on the third game that just released). I’m not one to look a gift horse in the mouth, so of course I downloaded it. The name sounded familiar, but I definitely had never looked at this game as a “must have.” It’s pretty standard WWII shooter faire, though it’s third person. Having been expecting a first person experience, I was slightly disappointed. There isn’t a lot of difference between 1st and 3rd person shooters, save for camera angles, but in this case I feel that this choice hurt this game. For some reason the camera wasn’t really responsive and felt very clunky — especially in tight quarters. The story of the game is that you are a sniper sent to take out high priority targets, on operations that weren’t really covered in other WWII games. The gimmick, is that when you make a kill shot, the game slows down and a matrix-like sequence of the camera following the bullet ensues. Once that bullet hits its target, you get an x-ray view of the victim’s body, showing what vital organs your bullet exploded. While this is entertaining the first couple of times, it gets old pretty quickly. Fortunately there is an option to turn this off, but it still doesn’t save the clunky-ness of the rest of the game. Really, once you turn that feature off this game becomes extremely “more-of-the-same.” Apparently there is the option to use a gamepad, and I think that would make a big difference in the way things control, because it feels designed for the console. I didn’t actually try this though, because I had already uninstalled the game.

MOBAs and Etc.
I have been playing Hearthstone a little more sparingly as I had already mentioned. However, I finally hit my 1000 gold saving mark, which I feel is a good amount in preparation for Naxxramas when it releases. I know that the base part of the expansion is free, but the further wings are supposed to be available via in-game gold, and I want to be ready for that. Also, since all of the cards are going to be earned by playing through the single player campaign, I don’t have to worry about Arena runs to earn expansion cards. A few more gold and I’ll be back to Arena runs again.

I’ve also been playing Awesomenauts and even got in a couple rounds of League, but nothing really new to report there.

Path of Exile
If you listened to the Podcast, you’ll recall I mentioned having played Path of Exile a bit. I knew because I hadn’t played the game in quite some time that I wouldn’t really remember what I was doing with my existing characters, so I decided to roll a new Shadow. I had tried melee classes before, and though I felt that they weren’t for me back then, I ended up enjoying both the Shadow, and the subsequent Templar that I rolled. I haven’t played either beyond level 10 at this point, but I think I figured out why I avoided melee before. My old laptop ran the game, but not as optimally as this PC I’m using now. With the additional smoothness it’s easier to read enemy intentions, and that means dodging and jousting are more effective. I didn’t delete my other ranged characters though, so they’ll end up getting played again once I get back into the swing of everything. I’d like to see at least one of them through to the end of existing content, as there’s already talk of another expansion on the way. Here’s my lowbie Shadow: 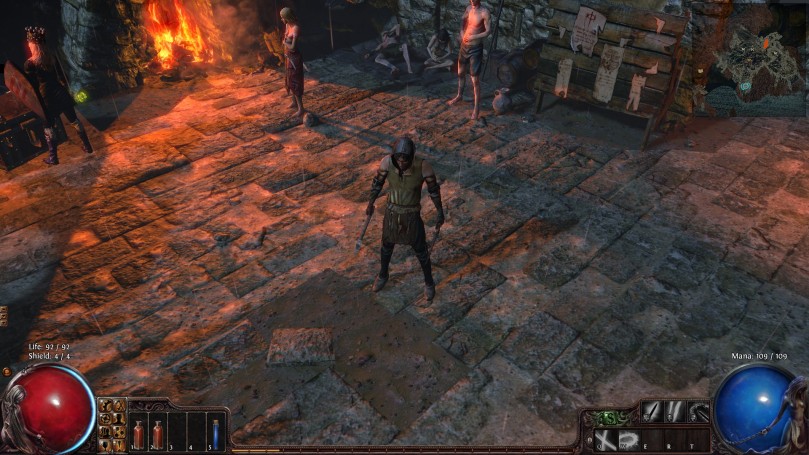 When I was playing my Templar, something cool happened. I was standing by my stash, and a higher level character came by and initiated a trade with me. I accepted, and he gave me a really sweet low-level item: 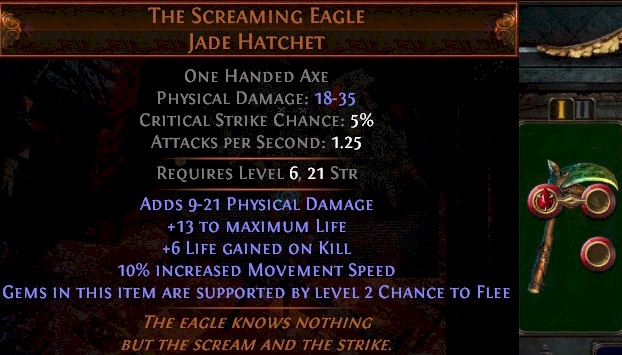 It’s not as if this is something that I’ll have for a huge amount of time, but it was still nice of that player. The only disadvantage was that two of my ability gems required the use of either a mace or a staff, so that eliminated my using those temporarily. I still have them slotted, but I didn’t read the fine print until I was in the middle of battle. Because of the rarity of this item I was able to do enough damage with just basic attacks that it didn’t really matter on the loss of ability. I was missing the AOE though. I’ll upgrade when I can. Here’s the Templar for now: 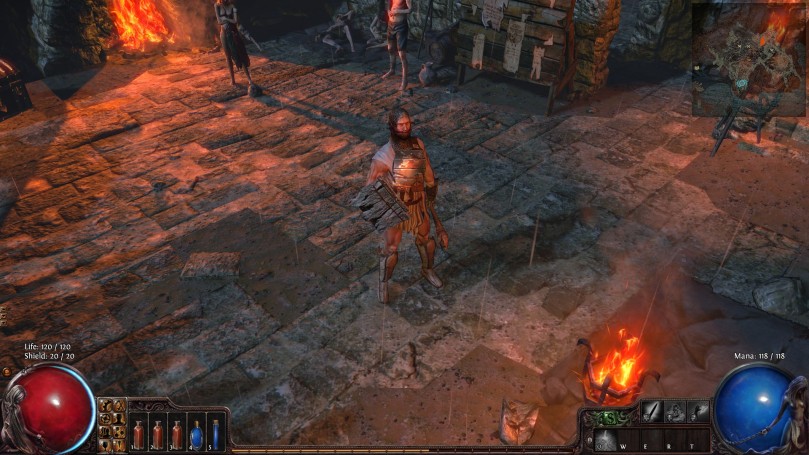 Marvel Heroes 2015
I’m not sure what blog I was reading, but someone was talking about Marvel Heroes and new stuff that was added because it’s been out for a year now. When I looked it up on Steam, I found that the title has been changed, adding in the “2015.” I’m not sure if that means they’ll be doing something like this yearly (like EA sports games?) or if that’s just the best that someone could come up with for the time being. Either way, watching the videos had me intrigued. It’s another free to play ARPG, but centered around superheroes. Despite there having been quite a few superhero MMOs — I tried DC Universe Online (but prefer Marvel characters) and Champions Online (different universe altogether, so nothing recognizable) and many superhero games (can’t remember the last one I really enjoyed) this is the best superhero game I’ve played. That isn’t to say that it’s doing something revolutionary, but that it’s just well done for the most part. There isn’t a pay wall so to speak; all of the heroes are purchasable via in-game currency, but other items and skins are pay-walled. It’s basically the same system LoL uses: get the champs for in-game cash, skins via RMT. My only complaint was that though there were a good number of heroes to pick from at the beginning, there weren’t too many that were my favorites. I’m sure they do that on purpose. Also, once picking your initial hero, you can’t play any others until you earn enough credit or use cash to buy another. So despite them making it seem like you get multiple heroes off the bat for free, in truth you only get one. In only a few hours of playing, I’m close to being able to unlock other heroes though. 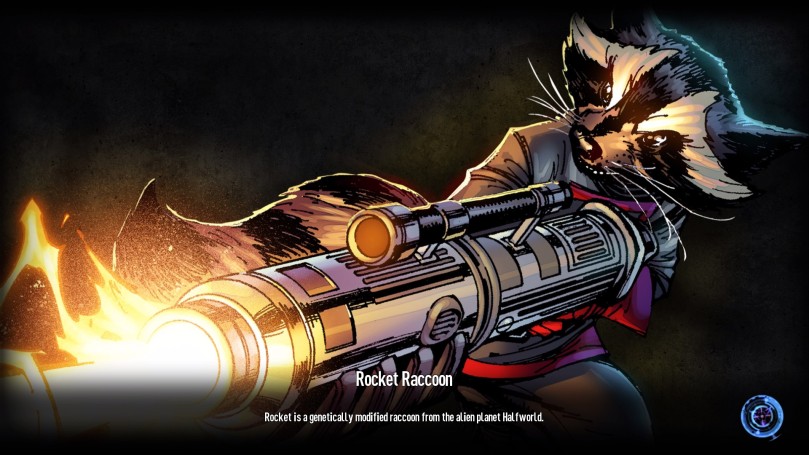 I started with Rocket Racoon, who is from Guardians of the Galaxy, and is a character I wasn’t really aware of in Marvel until I saw the preview for the Guardians of the Galaxy movie (apparently he was introduced in the 70’s, but I just missed it). He’s pretty cool, with turrets and lasers ‘n’ stuff, but I really want to play Spider-Man and Wolverine, among others. The game plays like any other ARPG, but is more hectic, if that’s even possible. It seems like the screen gets flooded with enemies all the time, particularly in open areas where other players are running around. Bosses are challenging, and mostly well known characters from the Marvel Universe. The talent tree is pretty straight forward and functions more like they used to in old Diablo games or even Torchlight. 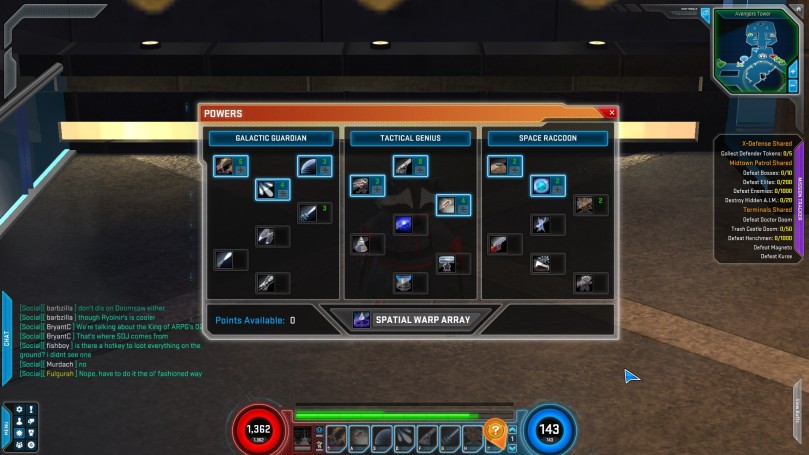 This was an ARPG designed to be an MMO though, so rather than having everything instanced and only interacting with other players in town like PoE, or playing completely solo with world chat like D3, you run into people all over the place. They’re in town. They’re doing the same missions you are. At one point a whole bunch of us were fighting the Rhino together, and he took a long time even at that rate. 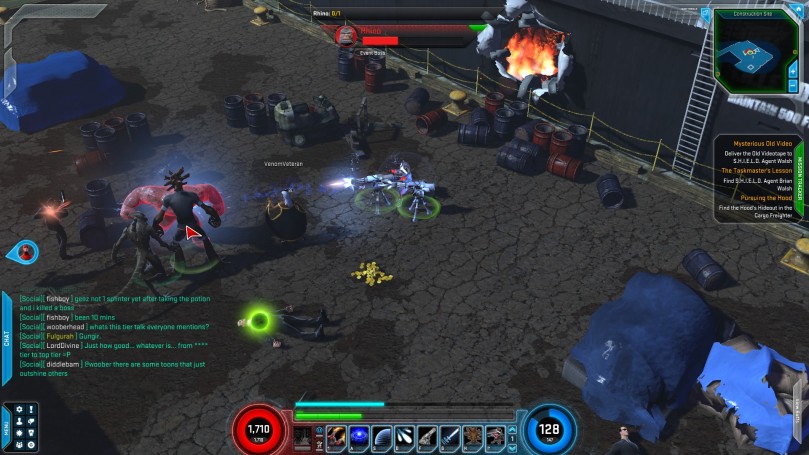 I’m over there hiding behind my turrets, my buddy Groot (summonable minion) is helping some others beat on him up close. Overall I’ve been having fun with it, and put more time in with it than PoE so far this week, but I plan to try and alternate between the two and my mood swings.

That’s all I have for this edition. See you again next week.

3 thoughts on “State of the Game: Action Oriented”