With the Steam Summer Sale going strong, I thought I’d take a look at one of the lesser played, less popular genres, and I’d like to point out that most of the titles I’m about to talk about have been on sale during this event. I narrowed my list to seven, and I’m probably missing some really good rogue-likes, but I didn’t want to bring up games I don’t own and haven’t played. There would be some honorable mentions here for games that fall within the category and that I’d like to own eventually, but I can’t comment much on games I haven’t played. So with that said, here’s 7 of my favorite rogue-likes (in no particular order): 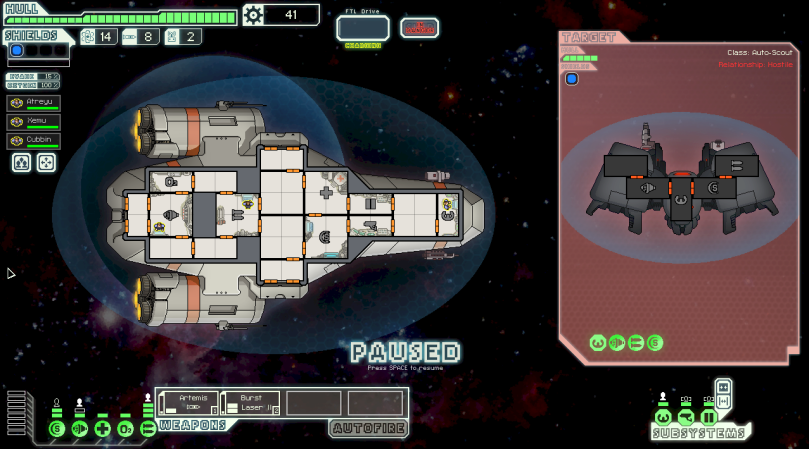 FTL released a couple of years ago, but within the last few months has had an expansion of sorts. The game still plays the same and the end goals are the same, but new alien species and spacecraft have been added, giving the game that much more replay-ability. I for one always envisioned each jump being like an individual episode of Star Trek: The Next Generation. Similar in plot, if nothing else, seemingly helping the entirety of the universe to survive. Other tidbits like stores, random encounters and distress calls keep things fresh, as these are randomized each time you start a new game. The beginner ship isn’t the greatest, but eventually you’ll open up new ones and that will aid in your struggle to get to the end of the game. Sometimes you’ll die long before you get there, but the reward is experience, and learning how the game’s systems work, which will in turn help you in further playthroughs. This game is phenomenal. It has popped up on the Steam Summer Sale more than once already, so go get it while it’s discounted!

Rogue Legacy is basically the Rogue-like variant of Ghosts ‘n’ Goblins. You have a very basic kit to work with, and it’s action-platformer meets fantasy. However, it has some subsystems that give it depth, along with the typical permadeath and random generation of the levels. I find it very enjoyable just from the platformer perspective, the difficulty is just right, mini-games are fun, and the bosses are epic. The subsystems of upgrading your “castle” (basically a skill-tree) and being succeeded by an heir after your death are entertaining. Eventually you will earn enough gold to upgrade your items and classes and passive abilities, and getting further into the dungeon will be a bit easier. Just don’t forget to lock your instance! Getting through everything in one sitting would be way too tough. This one has also popped up on sale multiple times, so get it while it’s hot!

This is one that I picked up specifically because it was on sale a couple of times recently (for only $2.50! selling steam cards has its advantages!). This is another action-platformer with rogue-like and RPG elements, but set in space rather than having the typical fantasy tropes. You start off with one class available, and like League of Legends or other ARPGs, you have a set of abilities on cooldowns that you’ll use while running around blasting enemies. It seems that the levels are actually set up in a particular way, but what mobs spawn and other factors are randomized. There’s also permadeath, but you can unlock new items and characters to play as even if you die early — it just depends on what you do with your time. There’s also an overall timer that adjusts the difficulty of the game as you go, so finding the teleporter quickly and moving on to the next level is a pretty good idea. Bosses are huge, and difficult. Eventually though you’ll get the hang of things and start unlocking goodies (you’ll see I opened a couple things during the video playthrough above, which is just a single level). One place where this game rises above the others is in the fact that it has 4 player co-op. I have yet to try it, but it sounds like it would be a blast!

Quest of Dungeons is truly indie in that it’s been made by one guy. It’s more along the lines of a traditional rogue-like, like Angband, but with better graphics. It also released more recently than most of these titles, but it’s still been on sale. I find that it’s not overly complex, but there’s all the elements of rogue-likes that I enjoy, and that’s enough for me. I enjoy the graphical style, the game controls solidly, and the difficulty is just about too easy most of the time, and then BAM you die anyway. There are four classes to choose from, and though they don’t affect the game play too much, they do all come with their own abilities and I’ve found that the ranged classes are easier to deal with. Another game I’d recommend picking up if you’re a fan of the genre.

5. Sword of the Stars: The Pit Gold Edition

I’ve talked about SotS before, and it’s still a great game. Both the original version and the Gold edition are on Steam, but don’t bother unless you get the gold, as it comes with all of the expansion content. The game plays much like QoD, in that it’s more traditional rogue-like, but it does have some differing systems, and is set in a sci-fi setting as well. There are a multitude of classes, skills, weapons, recipes and bad guys, more so than I’m going to go into now. Still, if you are a fan of the genre, this game is a must-have. It’s by far the hardest in my collection, and starving to death is a common occurrence.

This one is a mis-mash of all kinds of genres. It’s a shooter. It’s a rogue-like. It’s sci-fi meets post-apocalyptic. It’s a little bit of everything, and a whole lot of nothing. Yet it’s a diamond in the rough. Don’t let the cheesy graphics fool you, this game is brutal. I have yet to beat it, despite my best efforts. The levels and mobs are procedurally generated, along with drops (guns) so no play through will ever be the same. It’s also twitchy (like Risk of Rain) because you need to be able to aim and coordinate dodging and timing. I personally love it, and though it’s in Early Access it already feels like a completed game. It’s $13 though, so the most expensive on this list, considering I haven’t seen it on sale at all.

7. The Binding of Issac

This game takes the genre in new directions. The dungeons are laid out in a Legend of Zelda style, and you are stuck in rooms til you kill the enemies. Keys and bombs are the items you’re using the majority of the time, but eventually you get some pretty off the wall power-ups. Later you’ll even open up other characters who have demonic special powers. The game is creepy, wacky, gross, and funny all at the same time. It’s really hard to explain, but you need to play it. I haven’t seen this one on sale for a while either, but at only $5 it’s worth its full asking price.

So there you have it. A short list of Rogue-likes that I think you need to buy/play. It’s the Summer Sale so there’s no better time than the present! Happy Gaming!