Another week has come and gone, and we’re probably halfway through Summer already. That’s good, because it gets too damn hot here, and I’m ready for the cool of Fall. So what have I been playing? A mix of old and new, with more new stuff on the horizon. Sounds typical right?

I’ve been playing Hearthstone more often lately. This is partly due to the fact that I am trying to save 2800 gold to be able to purchase the four Naxxramas wings as they are released. I made it past 1700 gold just last night, so that’s enough for two wings with a big left over. Working towards that 2800 won’t be an issue, with dailies and what we’ll be working on when Naxxramas finally hits. Speaking of which, the official release date was announced the other day, and the first wing of the expansion will be available on Tuesday.

The other reason I kept playing even beyond completing dailies was because I got on a roll in ranked. I haven’t really played Ranked too much since the game went live. I usually just make sure I get a little past rank 20 so that I get the special card back each season. I have hit a personal wall before, and 17 seemed to be the rank I’d always get stuck at. Win some, lose some, but never go beyond it. That changed the other day. I’m pretty mad though, because my winning streak should have continued beyond this point. I was doing pretty good in the game after this one, but then something shitty happened. I never got the notification that I was disconnected or “attempting to reconnect” or anything. But suddenly the game froze on my opponent’s turn, and nothing happened for a good twenty minutes. 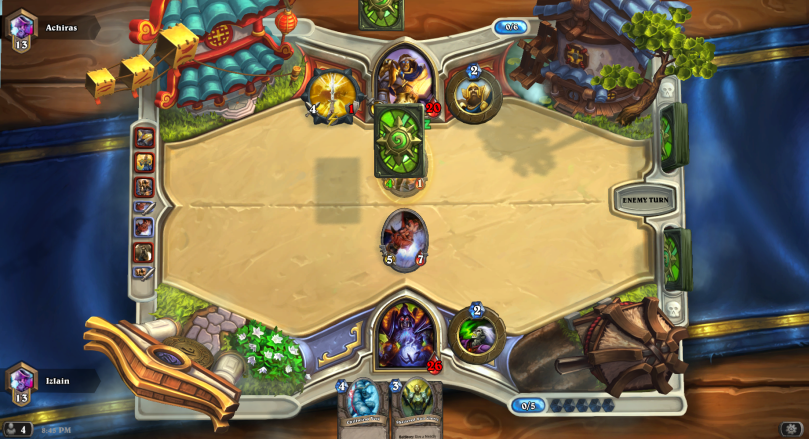 Eventually I got sick of waiting, so I left the game, and was given a loss. That seems like an instance where Blizzard needs to implement a “loss prevented” like Riot did in League. Who knows how much further I would have gone with that streak. I ended up losing the next game, so that dropped me down to 14. I’m not sure that I will keep trying or not. I’m pretty satisfied having done better than my best in the past. I’m mostly looking forward to Naxx now.

I made another milestone in another game as well. I’ve been playing Awesomenauts pretty regularly still, for the past six months or so. I play it on both the console and PC too, which is redundant, but I still enjoy each for different reasons. Anyway, I was shooting for being in the top 1000 before (console version), and ended up doing that, and then not focusing on it as much. My roommate was bitching the other day that he wanted me to help him out with trying to get up there, so I’ve been doing more with him lately. The other day we ended up having a bunch of kick ass matches, and I hit a new high, the 700’s:

He’s highlighted there, I’m at the top of this list. He also went up quite a bit that day, but since then we haven’t been able to get any higher. Such is the nature of leaderboards. Besides that, on the console I’ve also played more Black Ops 2. I’ve hit rank 40 now, so 15 to go before the first prestige. I seriously doubt I will play that game very seriously much longer. I still want to see all of the upgrades and stuff you can get by the time you’re max level, but after that I probably won’t bother any more. Still more of the same and I think I’ve scratched that itch.

I’ve been keeping my eyes out for new games to play as usual, and besides finding that free bundle I talked about a couple of posts ago, I also ended up getting into a beta for Defense Grid 2. I know, I never talk about Tower Defense games, and yeah, I don’t really like them all that much. But if something doesn’t cost money, why not at least try it?

I have played some games in the genre that I’ve enjoyed, though usually more along the lines of Dungeon Defenders. Anyway, this one is pretty basic, and it’s the OG scenario, where you just place different towers and watch them do all the work. It’s a pretty game compared to many I’ve seen, but it’s still that same basic gameplay that bores me to tears. If you enjoy the genre, I’m sure you’ll love it though. I can see the appeal, it’s just not for me.

I’ve also played more SWTOR, and it’s still held my interest to this point. I’m currently level 12, having spent time working on the story, I’m still trying to get into the great hunt. I’ve taken out the first target on my list, but there’s still two more people to kill before I can gain my entry. I finally got to play some of the space battles outside of the tutorial, and I have to say that I really enjoy that PvP mode more than the standard PvP. By far. It’s actually pretty damn fun, and not that difficult at all. Of course, I was probably playing against a bunch of other noobs like myself, and I just happened to be on the winning side.

Lastly, I downloaded Firefall, because of it’s impending “release.” Apparently the game has been in development and beta for a long ass time, and J3w3l told me that I needed to download it and play with her. I did so, but was unable to play, because the game isn’t available until the 29th. It is, but you needed to have been a beta participant in the past, or pay some outrageous early access package fees. Yeah, no thanks. So I’ll be trying that around the 29th. I also downloaded TERA, because it too is free to play and on my to-try list. More on these titles later.

What have I been watching?

It’s been a while since I touched on my Netflix/DVR Queue. On TV I’ve been watching AMC’s newest addition, Halt and Catch Fire, which is about a group of people who were in direct competition with IBM in the 80’s, and are trying to innovate during the birth of the personal computer era. It’s quite interesting, if not a little weird at times. It’s getting close to the end of the season at this point, but it’s definitely a good watch, particularly for nerds. Another new show started up on Sundays last week, called The Strain. It’s more horror and sci-fi, but it’s right up my alley. AMC and FX have been doing a hell of a job with TV shows that speak to me. I can’t really comment too much on that show because it just started, but so far so good.

Another show that was on FX, that ended recently was Fargo. Yeah, it’s loosely based on the movie from the 90’s. I actually caught the premiere but it conflicted with other shows my roommate was recording so I had to find it on the interwebs. I’m four episodes deep there. It’s been a great show. It’s so quirky and has such a great all-star cast that if you haven’t seen it you need to do yourself a favor. I’m also watching Defiance on Syfy when it airs on Thursdays. I really enjoy the show, much more so than the game. The whole tie in is a neat idea, but I don’t think it’s required to enjoy one or the other. If boring shooters are your thing 😛

Lastly, on Netflix we have been watching Dexter from the beginning. I had always heard good things about the show, but never watched it while it was still on the air. A couple of months ago Netflix added all 8 seasons, so we’ve been binge watching. We’re a couple of episodes into season 4, and man what a good show. On the one hand it’s got all of the tropes of every serial killer movie and CSI TV show. That means it’s a little predictable at times, but it also manages to find crazy ways to mind fuck you. And that’s always a good thing in my opinion. I would recommend all of these shows if you’re looking for something new to watch.

That’s about all for this week. Until next time, happy gaming!