Most of you not living under a rock know the the new Naxxramas expansion for Hearthstone has gone live. The first of five wings released this past Tuesday, The Arachnid Quarter. In it, three new bosses (similar to the bosses of the tutorial) are out to see you dead, coming at you with all new hero powers and cards exclusive to the expansion. Not only is there a normal difficulty for these three bosses, but also a heroic mode, where the difficulty is cranked up from cake walk to unfair — at least until you know what you’re doing. It’s good that Blizzard has tried to challenge us into changing around our best decks, and giving us new cards in the process. Yeah, that’s right, beating these bosses give cards, and once you’ve done it all, you’re even rewarded with a Legendary. Outside of the bosses, are two class challenges that allow you to earn the class cards that I went over not too long ago. This time around it was the Rogue and Druid. I play Rogue pretty regularly but the card doesn’t really work in the deck I have, and I don’t play Druid so I could care less there. Further wings will be releasing each week, and I’ve been saving gold in preparation for them. I don’t feel bad, because I’ve dropped money for packs in the past (I still don’t have every card from the original set, and I’ve been playing since beta).

So I ran through the normal bosses bosses first, though that wasn’t a choice, as the other modes are locked when first starting up. 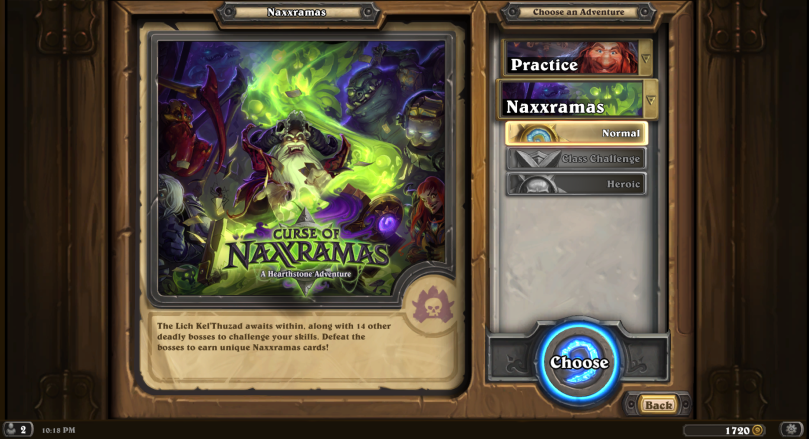 The first boss on my list to kill was Anub’Rekhan, a giant beetle looking thing. His special ability allowed for him to summon a creature for 2 mana. At first I didn’t know what to expect, so I just went with the tried and true Warlock deck — and managed to kill him by turn 6. This was going well. These cards ended up being significant for more than one reason. I have added them to my zoo deck for now, but more on them in a bit. Next, it was time to face Grand Widow Faerlina. She came equipped with another new hero power, the ability to shoot firebolts at random enemies (me and my minions) based on the cards in my had. Seems like a job for the Warlock, once again.

Zoo works perfectly to counter her hero power, mainly because cards are so cheap and you burn through your hand rather quickly. Keeping next to no cards on my hands mean she needed to throw up taunts or destroy my minions as fast as possible, but it wasn’t going to happen. Another boss down, and another reward:

I can see a use for this card, but you would have to make sure that you weren’t running a bunch of cards with battlecry. That wouldn’t fit with zoo, and not really with any of the decks I run. Perhaps this card will synergize well with further cards from the set, but for now they are just collecting dust. The next boss up was the final one, and seemingly most difficult. Maexxna is a giant spider who has a rather annoying hero power, particularly for the zoo deck. Her web ability returns a minion to your hand. Now that can be good if it has a battlecry or was low on health, but otherwise it’s rather annoying. 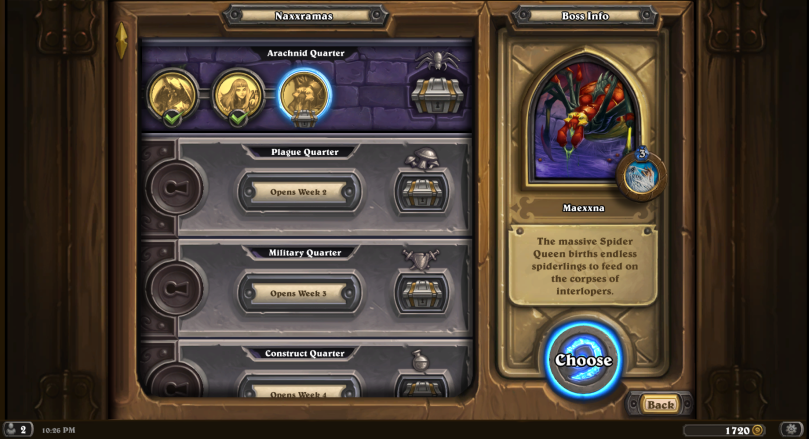 She was annoying, but not difficult. I still beat all three bosses on the first try and didn’t think twice about it. The reward from this battle was two fold:

Firstly, the egg card is phenomenal, and went right into my zoo deck. A cheap 2 cost minion that later dies and becomes a 4/4? I’m all about that. The fun part too is with a cleric or power overwhelming, you can use them for damage and still get your 4/4. Best card of the wing in my opinion. The legendary card for the wing is also earned at this point, and though it’s not the most phenomenal legendary I’ve seen, it’s still a nice card, and a beast to boot. This one went right into my Hunter deck, and gives King Krush some company.

The next part to tackle was the class challenges. In them, you play with a preconstructed class deck, and have to play against the bosses again. Rogue and Druid were both rather easy, and gave up these cards as rewards:

I’ve already gone over what I think about these cards, so no further commentary needed. The final step of the Arachnid Quarter was to defeat the original bosses in Heroic mode. Having felt that everything was rather easy up to this point, I still went into the first boss with my zoo deck, and got quite a surprise. Anub kicked my ass on my first couple of tries. I figured that meant that I should use another deck. Trying out my Hunter, it was a whole ‘nother story. With that victory in the books, I moved to the second boss. I didn’t have much success with the Hunter, so I went back to zoo, and that worked well again, for the same reasons it worked on normal mode. I guess I should mention that the difference with Heroic bosses is that they have 45 health instead of 30 (but you still only have 30) and their hero powers are more potent (they cost less and do more). Getting back to Maexxna, I had trouble beating her with any deck I tried, and I tried with most of them. The trouble is, that you have to realize the pattern, and plan accordingly. That’s not the same as traditional deck building, and I wasn’t prepared for it. In the end, I finally found something that worked: Paladin deck with lots of heals and cheap charge minions. For an example of how I did it, here’s a video I recorded:

The basics of the strat is to wait for the spiders (earned above, that I said there would be more significance to them) to fill the board. Maexxna starts off the bat with two, and she will web two minions every single turn. So if you don’t play more than two each turn, you don’t have to worry about having anything die. Once you have 3+ of those spiders you can use an AOE (consecrate here) to clear them, and each will spawn two 1/1’s.  Once you’ve flooded the board with 1/1’s or even another creature whom you can use humility on to lower their attack to 1, you will take 7 points of damage each turn. From there, you can eventually heal for more than the damage you’re taking, and whittle her health down. Watch the vid, you’ll see what I mean.

My only complaint was that beating all the bosses on Heroic mode didn’t yield a reward. I suspect that perhaps beating all the wings on heroic might, or that there will be some other tie-in. Time will tell. I’ll be back next week with tales from the Plague Quarter!