This Blaugust thing is still trudging along, but judging by the amount of people that started it at the beginning of the month (somewhere around 50 people) it seems that the numbers are dropping. Many predicted they wouldn’t make it the whole time. I figured I wouldn’t have a problem with it, and though sometimes I really have to dig deep to come up with something to write, most of the time I haven’t had much of a problem. I guess I just always have something to say, whether  you want to listen or not 😉

So what have I been up to this week? Having a regular podcast where I have to talk about what I’ve been playing and/or what’s been going on in the gaming world, sometimes it feels like I’m becoming repetitive. I’ve gotten into the habit of trying to split up what I do early in the week and put that on the podcast, and leave the latter portion of the week for this weekly post. It seems many people in my circle of friends have picked up the weekly round-up habit, so I’m not alone in doing so, and it’s become something I enjoy writing (along with reading their posts).

Alright, so this week I bought/received a few new titles. I bought Sonic’s Ultimate Genesis Collection for my PS3 which I mentioned previously. I haven’t been back to it since, but that’s partly due to the other pick-ups. Steam had a sale, and the expansions for Civilization V were included. As a result, I picked up Gods & Kings and Brave New World. It’s amazing the amount of depth that those two expansions add to the game. Right after I picked them up, I told Doone about it, and he wanted to play. We had already started a multiplayer match a while ago, but that was just the base game, and he was full of complaints about the “shitty AI.” I didn’t know any better at that point, and now having played against the new and improved AI, he was absolutely right. The new puts the old to shame. So we started up a new game, and not really knowing the new Civs I had to choose from, I just picked the Celts, because heritage. He rolled with the Shoshone who actually have some great starting benefits. We progressed a bit and then he had to go. We’ll pick it back up soon.

I also started my own single player game last night and marathoned it for a number of hours. I liked what I saw from the Shoshone, so I picked them. I unfortunately didn’t think to take any screenshots, so I’ll just say that things are going good. With the starting options I picked a world with a huge lake in the center, and I spawned near the southern-most part of the map. I slowly expanded and now stretch from the edge to the bottom of the lake. Trade routes are set up, and I’m spreading my religion pretty swiftly. I’m not sure what sort of victory I’m going for at this point, but I will get there. I’m just loving all of the new options.

Another game I was gifted was a copy of the new Shadowgate remake (it’s on sale on Steam right now). I’ve been watching this one for a while, as I remember the game from my childhood. I know that when my Dad used to play it on his computer it scared the shit out of me, but I know I ended up getting over that enough to try it. It also was ported to the NES and a few other systems, so I saw it pop up a time or two over the years. This remake is supposed to add more stuff and also change around some of the puzzles throughout, although so far it seems much like what I remember, just graphically superior.

The game is rather unforgiving. Most puzzles involve clicking on various items to find keys and spells and use the items you find elsewhere. There are bits where you need particular items equipped, like a shield to block an incoming arrow from a creature waiting to ambush you. In the above picture, I thought a shield might protect me from the drake’s flames, but I was wrong. Death finds you at every turn. I’ve died more times than I’d like to count, and some of the puzzles are rather difficult to figure out. Being the age of the Internet, I know that guides will pop up eventually, but at this point they don’t exist. Not remembering enough from the original has proven to be my downfall, cause I have basically become stuck.

There’s the map that I’ve explored. There are several places where I know progression is possible, I just haven’t figured out what I’m supposed to do. I found a spell that enabled me to open a sealed grate, which contained a lever puzzle. After messing with that, I was told I could hear a rush of water elsewhere. Returning to a previously flooded room saw the water level lowered, but that didn’t seem to do much else. It’s rather frustrating after a while, so I’ve left it at that for now. More on this later when I get it figured out. 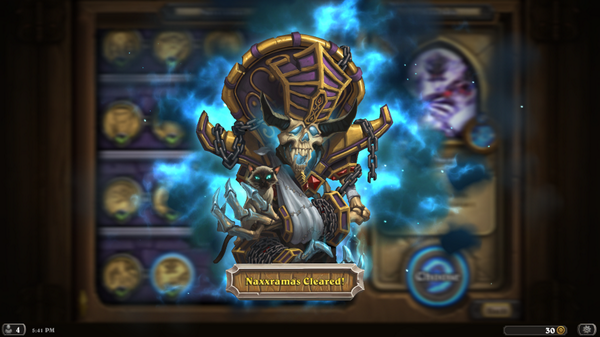 Hearthstone saw the last wing of the Naxxramas expansion release this week as well. I think it was last weekend that I went back and cleared up what I hadn’t finished to that point, and then I finished the last wing the other day. Kel’Thuzad, the final boss was a cheating bastard! There’s a point where he straight steals your turn from you, no matter how much time you actually had left. Overall, the bosses ramped up their difficulty as time went on, but normal mode was fairly easy to finish. Having all of the cards also meant that there was some deck tweaking to do. Kel’Thuzad the Legendary card was a nice addition to my Zoo deck, as his ability brings all of your minions that died that turn back to life. I’m sure people will find ways to counter that, but it worked wonders the couple times I got to use it. But now it’s back to the normal play, and I’ll probably slow down now, because outside of finishing the original card set, I don’t have a lot to do. It has already been said that the next expansion will be pack based, so there will be plenty of grinding in the future.

Last on my list was the ArcheAge CB4 event that’s still going right now. I picked up where I left off and kept on the traditional quest grind. At one point I came across an Elite quest, which seems to be meant for a group, and is a timed event. At 2 am and 2 pm this group of mobs spawns, along with a boss of sorts at this fortress. One problem with the sheer volume of people playing is that when you have these types of quests where you have to kill a particular named mob you often have to stand where it spawns and hope you’re the first person that hits it. You always manage to get the quest done eventually, but it’s kind of annoying. This quest was no different. However, a huge group of people started forming waiting for this quest’s target to spawn, and we formed a raid. Raids in ArcheAge are huge, and before you knew it we were full up at 50.

While we were waiting people were talking about the game and endlessly answering “what are you guys waiting for?” I inadvertently started a dance party. ArcheAge has a number of different dance moves you can use, and I was toying around with those, and before you knew it people started joining in.

I thought it was pretty funny. We also get a good look at a sampling of the different mounts in this picture. Later I found myself doing a quest to get my very own glider, and though they don’t look as cool as gliding in Firefall does, it is still a neat mode of transportation. 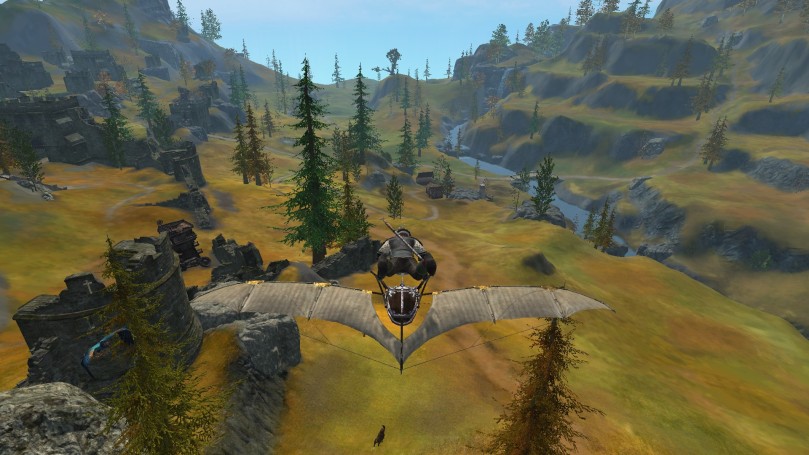 I still haven’t made it to 30 yet, and I’m not sure how many more of these closed beta things there’s going to be. Given enough of them, I’ll get to 30 and finally see what the other bits of the game are like. If not, open beta should be the time where I get there. Then I can decide if I’ll actually put the time in to do it all over again when the game goes live.

That’s about all for this week. Catch ya later.