August ends today. That means Blaugust ends today as well. It’s been a trip. I know that some days were harder than others to find something to post, but overall, it ended up getting done, and that’s that. I think it was just what the blogging community needed, to get those who had become stagnant back into writing, and to keep the rest of us motivated to keep going. Someone will have to come up with something new in a couple of months to keep this community feeling alive. Novembering? You ‘member. Hell, I don’t know.

So what have I been playing? A mix of this and that, as usual. There were some new content drops on some of my favorites, along with a free weekend deal on Steam, and I got sucked back into another MMO that I hadn’t touched in a very long time. Where to start? How about Diablo? 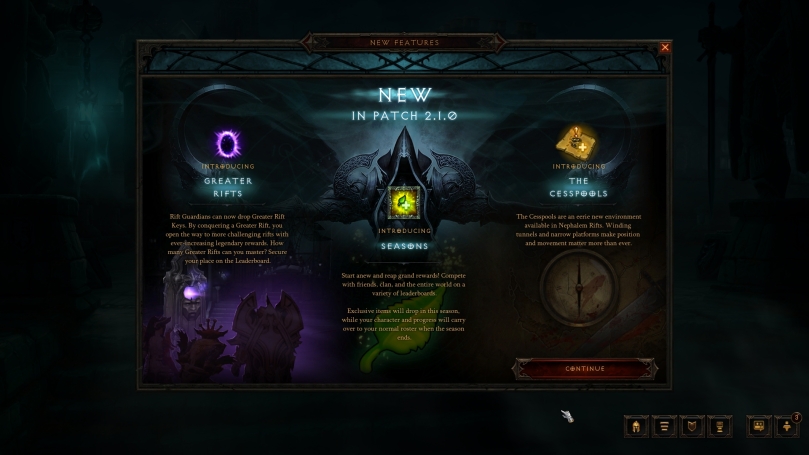 Patch 2.1 came out on Friday. With it, came different types of Rifts for adventure mode, the introduction of Seasons, and a bunch of other stuff. You should read the patch notes if you haven’t already. I haven’t yet checked out the new rifts or cesspools (an extension of the rifts) because instead I started up a new character for Season 1 with Eri. Of course that means we rolled Hardcore characters, and despite starting the game on hard, we still managed to blow through all of Act I in a single sitting. By the end of that, my freshly created Crusader was looking pretty schweet:

It seems like the legendary drop rate was increased, because in one session I got four of em. That axe, crown, and a couple of pieces of jewelry. Granted, low level legendaries aren’t all that great, but still they made for a nice boost in damage and survivability. This is the furthest along I had gotten with a Crusader thus far, and I have to say that their kit is like 50/50 good/bad to me. Parts I really like, and other parts just seem so stupid. I can see why they made the choices to add to the different build types, but who wants a plate wearing tank that stands back and just throws stuff? I have a mage for that, thank you.

Awesomenauts also got a patch this week, with 2.6 seeing release. There’s a bunch that was included here as well, but there’s only one major point I want to touch on, so you can view the full notes over here. The biggest change that I saw was the removal of the loadout. Each ‘Naut had 4 rows of abilities, 3 could be chosen in each row prior to a match. Once in the game, you couldn’t change these options. Two of the rows would correspond to the Naut’s abilities, another to their basic attack, and the last was utilites that all Nauts shared (for the most part). There were many choices that could be made, but you would get stuck with whatever you had opened due to rank, and then limited to 3 choices. Upon removal of the loadout, you still are limited to 3 choices per row, but now the entire row is available in a match, so you can pick and choose on the fly, allowing for situational picks dependent on what’s going on in the game.

The locked ones are abilities I haven’t yet opened (I recently prestiged again), but you have all of the options available. Once you pick three, the rest are locked up for the remainder of that game. Still, it’s nice because you never know who you’re going to face, and sometimes the other options would be more viable. I usually have a best case scenario build that covers most options, but this way I can change things on the fly, and that’s a good idea. There were loads of other minor changes, but this was a big deal.

This weekend on Steam, like most weekends, there were games to be played for free. Often times I’m not interested in what is offered, but this time around a game I had thought about buying on several occasions popped up: Contagion. It a remake of the Zombie Panic mod for Half-Life. It’s a co-op and pvp zombie themed FPS game. When you start a new round, depending on the game mode, you’re either co-op with other humans trying to complete objectives and kill zombies, or it’s full pvp but also with zombies. In either case, when you die, you become a zombie. Playing as a zombie isn’t necessarily new, but it’s the first time I had done it, and it was rather fun.

With “Zombie Vision” you can see footsteps of humans that will lead you in the general direction, you can roar to attract others zombies and have them follow you, and also give them commands. It was fun to run about and kill other players, especially when done just right to where they think you’re an AI until it’s too late. Playing as a human is the same old thing, though you at least have weapons. Ammo and supplies are sparce though, and the zombies seem endless. On the objective based maps you also have a cell phone that tells you what to do, but I didn’t really “get it.” I had more fun in the PvP modes. 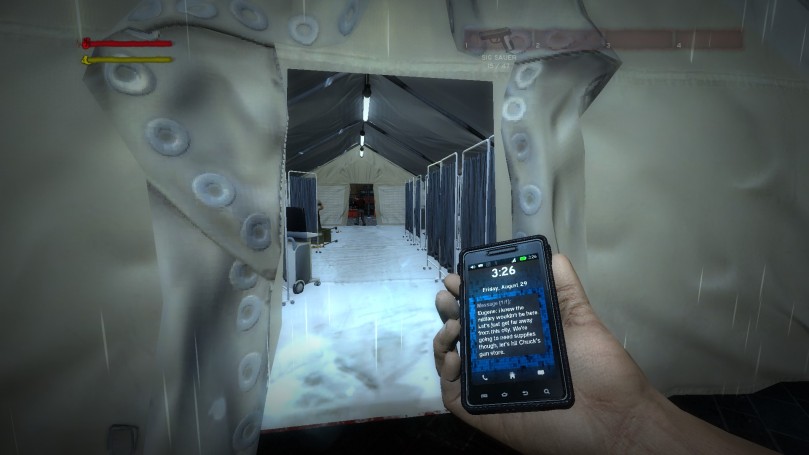 Overall it’s a pretty cool game and would probably be worth the sale price right now, but I don’t know anyone with it, and games like these are always more fun with friends rather than real people. I think I’m going to skip it for the time being.

Lastly, I was asked to join in a Saturday night group in WoW. Yeah, it’s been since the WotLK days since I played, so there’s two expansions worth of content there I haven’t touched, along with the new one coming in November. Yeah, it’s a themepark and I’ve already stated my opinion on all of that. I would rather have an awesome new sandbox-y game to play, but that’s not out yet. Yeah, I’ve been interested in ArcheAge for some time and I realize it’s coming out soon. Being free to play, I don’t really have to worry about that one. I’ve been in Blizzard mode for a while now with D3 and Hearthstone (still need to get around to playing through Starcraft II), so jumping into WoW was pretty easy (not that it was ever difficult). The accessibility and polish of the game are still top notch, and it goes back to feeling like the good ol days in no time.

The weekend group consists of my Dad and some of his multi-game guildies. Apparently one of them had an established guild on the Alliance side, Eonar server. They decided to roll a bunch of Draenei (not my first pick — but whatever) so I decided to join them. I picked up the base game and Mists of Pandaria, and away we went. We only made it to level 8 before people started logging out, mainly because some of them are east coast, but it was still pretty fun. My Draenei ended up being a Priest because we didn’t have a healer yet, and I’ve don’t usually play the role, so it was something new.

Later, I took to Twitter to look for a Horde side guild that I could participate with fellow bloggers in. @Scarybooster was the first to respond, telling me that he and @Oakstout play in a guild with @girl_vs_mmo on the Earthen Ring server, doing something similar, but with Undead. My old Warlock was Undead, so I was looking forward to checking that starter zone out again. Turns out this Undead group also needed a healer, and the only option for Undead is Priest. So I rolled two Priests in the same day. So far I do enjoy the class though, so no big deal. I have to level this Priest up to 21-ish to get caught up with their group, but I hit level 9 in one sitting, so it shouldn’t take long.

I’m not sure what I’m going to play otherwise. I wouldn’t mind making another Warlock, but I’m also interested in Hunter, Druid, Shaman, Rogue and Paladin. Since the Draenei will only be played Saturdays that’s done for this week. Once I get to the early 20’s with the other Priest he’ll be parked and used for that other group, so at that point I can do whatever. Also, if you play WoW and want some company, leave your battle.net name and your server in the comments, and maybe I’ll come to your home as well.

That’s all for this week’s edition.

6 thoughts on “State of the Game: Blaugust Finale”