My pocket book is in dire straights. Due to financial limitations, titles like Road Redemption that just released on Steam, and others that are coming, are just not going to be purchasable anytime soon. This also means, that despite having had some fun in World of Warcraft recently, that time is about to come to a close as well. I just can’t afford a subscription for the time being. When I decided to make the jump back into that game, I had some things on the horizon that didn’t come to pass, so I did think I’d be okay with a sub fee, but am not at this point. I have 9 days or so of remaining time, but I’m not sure how much I’ll play, knowing that I won’t be able to beyond that time frame. So my 30’s Priest and Paladin, along with my plethora of lower level alts will have to wait for my return. Perhaps by the time Warlords of Draenor drops I’ll be able to get back into it.

That leads me into this week’s title. Since I now know that for the immediate future I’ll be unable to buy any new titles coming out, and can’t afford to play WoW (or other subscription based MMOs), I’m looking forward to my other options. I played League of Legends and other free to play titles, along with whatever came from Playstation Plus in the past when I couldn’t really afford to game, so I know that those are still options. I was looking at my download list on PSN just the other day, and I know that I have a bunch of titles from the service that I either never played or never finished. Many of those titles are great games, but I put them off long enough that I forgot about them or just keep telling myself that I’ll get back to them. I’m not talking little Indie games either, I’m talking full-blown RPGs with hours of play time, among other series that I’d love to get down with. For whatever reason, while I’ve had the money to spend, I just keep piling on games and finishing few. Sales and Bundles are mostly to blame, as is my inability to put my foot down and just finish a game before moving on to another. Don’t get me wrong, there have been games that hooked me long enough to be finished, but it’s been few and far between for the last couple of years. Add MOBAs and MMOs and Blizzard’s other games and yeah, I just have overload.

I’m looking at this time as a way to be able to clear out the backlog and maybe get back into some of the free to play MMOs I haven’t touched in a while. Yeah, maybe I’ll even play ArcheAge some more, though I’m not waiting in fuckin’ queues, nor am I jumping on newer servers that will be dead in a few months. I’m still on the fence. You’ll recall in the closed beta I was unimpressed to begin with, then got sucked in a bit and had some fun, but lately haven’t been talking about it. Well, I’ve made some comments elsewhere, but haven’t talked about it here. I’m feeling like it’s still not the overall MMO experience I’m looking for, but I really wanted to try out the high end stuff. Just don’t care about farming bullshit and don’t feel I should have to grind to get to the open-world PvP, which is what really interests me. Being a F2P title, I might go back after they sort out these server issues, but I’m not buying the hype train. Honestly the level of polish that comes with WoW was satisfying, despite being a themepark. Just like other Blizzard games, they get it done right, and the addictive nature takes over. I’m thinking about playing Rift some more, especially since there’s new content coming and I never made it to end game. One way or the other, this is all hypothetical, since finances can change rather quickly.

I am serious about clearing out the backlog of games I’ve got on both the PC and PS3 though. Not feeling the requirement to play anything because of an outstanding sub fee or having just spent money on it will be a nice feeling. Everything I have at my disposal now will have already been paid for, or will be free so I don’t have that buyer’s guilt thing going on anymore. I think I might actually make some progress on my library. Now the challenge comes from trying to figure out where to start. Always something.

I did play a little bit of WoW, getting my Paladin some skill-ups for his mining and blacksmithing skills, along with gaining a few levels. Now level 31, I also picked up his dual spec, but found that the differences between the two were underwhelming. I do miss the skill tree setups from the WotLK days. I also managed to do enough to gain a reputation rank with the guild, so Thalimoos is now a “Veteran” of the guild: 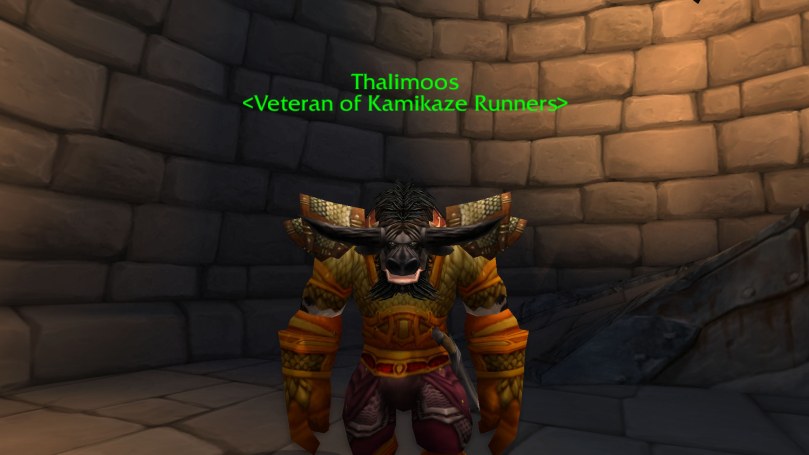 This came after I realized that I had out-leveled yet another zone, and moved onto the next in the progression. I don’t remember that being as much of an issue back in the day either. I much rather do all of the quests (or most at least) and see the entirety of a zone before moving on, but I only got to do that with the starter area for the Taurens and Azshara. Every other zone was outleveled before I completed it. I know this is an effort by Blizzard to get you moving on to the high end stuff, but honestly it kind of bugs me. Or at least, it bothers the Explorer and Achiever in me. My Killer wasn’t really appeased much in WoW. Socializer was happy when playing my Undead during our instance group nights. But I digress. WoW is on the shelf for a while.

I started on the mission of clearing out games this week, since I was already dealt the bad financial news early on. I got on my PS3 and cleared two of the TellTale Games in my back log, and wrote a post about that experience. At that point in time, I hadn’t beaten Jurassic Park, but did the next day, and that was all well and good.

Another game that I’ve had for a while but hadn’t really played was Starcraft 2. I got the itch to play it a few times over the last few months, but didn’t because I knew that I’d prefer to play it straight through or pretty close to that, because it’s not the kind of game you want to come back to months later. Better to keep things fresh. So at this point I must say that it’s got all of the familiarity of the first game, but adds little twists and turns that add to the fun. I’ve only completed a few missions thus far, but it’s been a blast from the past. I bought the game with the add-on included, so I have two full campaigns to complete. I’ll be working on that for a while to come. I’m really looking forward to the Zerg campaign as they’ve always been my favorite, and from there I’ll be trying out multiplayer, which used to be my life in the late 90’s.

Some of the features I like best are the new ways in which you can improve your troops/base from outside of an actual mission:

It’s also cool that there’s achievements on missions, so there’s a level of replay-ability that was missing from the first game. Also, there seems to be more “epic moments” where things happen during the missions using the in game graphics, that just weren’t possible during the era that the first game came out:

ZMR happened, and I wrote a list about why you should play it. I tried getting back into it last night but they are having server issues, and it was far too laggy to be enjoyable. Hopefully they straighten that out soon. In the immediate future, I see the above two games being played quite regularly. I also downloaded Strife, which is a new MOBA that some people in the circle have been talking about, and it looks interesting enough to give a while. I tried to play DOTA 2 again a week or so ago, and I still don’t care for it. Maybe this game will be able to hang with my current favorites, LoL and Awesomenauts. I have playthroughs of F.E.A.R., L.A. Noire, and Dead Space 3 all waiting for me to get back to them, so I’ll probably pick from that pile and stick with one. Hell, I don’t even know anymore. I’m just going to try and start knocking games off the list until the list is more managable. Wish me luck.

2 thoughts on “State of the Game: Looking Forward”