This is part of my playthrough of the Dawnguard DLC for Skyrim. You can find earlier bits of this adventure on the Ongoing Series page.

It’s been 6+ months since I touched Skyrim, but I was interested to get back into it after reading a post over on Gaming Conjecture. I’m not really sure why I hadn’t finished up the DLCs, but my best guess is I got involved in other games and they fell off my radar for a while. Every time I had thought about firing up TES5, I simply didn’t.

I had to do some looking around to be able to pick up where I left off. Turns out that I had a post planned that would tie my last post about the game to this one, complete with more screenshots. However, I have switched computers since then, and I have also switched phones, so the two places where the pictures might have been are no longer in my possession. So, to tie things together, here’s a quick rundown.

When I had left off with the last post, I had just gathered the last Elder Scroll, and had traveled to Ancestor’s Glade, where I read the scrolls. After a vision and speaking to Serana, we headed to the Darkfall Cave. Here we ran into Knight-Paladin Gelebor who is one of the last living Snow Elves (the rest have evolved into the Falmer). Turns out he has a quest for us, and there’s no way around it to get ahold of Auriel’s Bow. We are charged with helping Gelebor defeat his brother, Arch-Curate Vyrthur, who is in the Inner Sanctum of the chantry of Auri-El. This boils down to him giving us an Intitiate’s Ewer which we have to fill with water from 5 different “Wayshrines,” but first we have to travel through Darkfall Passage to get to the Forgotten Vale. Gelebor opens the Wayshrine near him so that we may enter the portal to Darkfall Passage. This is what I would have posted, but never got around to. Now, onto my adventure from last night: 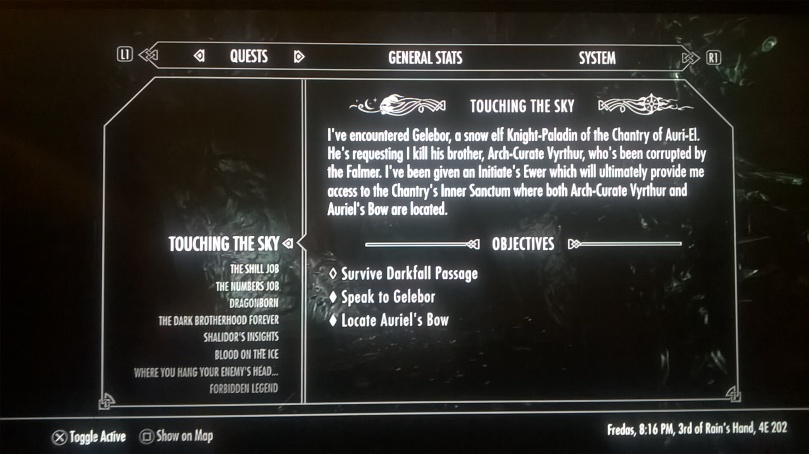 As the objective clearly states, our first task was to survive Darkfall Passage. This wouldn’t have been much of an issue as I was nearly level 47, decked out in Legendary Dragonbone Armor, and had many a Daedric artifact at my disposal. However, when I had last played I apparently used nearly all of my healing potions so my first few attempts at fast clearing were foiled rather quickly. Most of the Falmer went down pretty quickly, but there were some that were rather tough, and did quite a bit of damage to me rather quickly. I then resolved to use stealth and to let Serana get focused so that I wouldn’t take as much damage, and the rest of the trek was fairly easy.

Finally, we came to one of the ghostly former snow elves, Prelate Sidanyis. He opened this wayshrine and the Ewer was filled.

Afterwards we headed out of the Darkfall Passage and into the Forgotten Vale.

The Vale was beautiful. There were various forms of wildlife, along with the usual Trolls, Tigers and Spiders we’d become accustomed to killing. We had to visit all the corners of the Vale to fill the Ewer completely, so this wasn’t going to be purely a sight-seeing trip. Later, we ran into a new monster I had yet to fight: A Frost Giant.

He dropped a curious item, which actually opened a nearby portal. The portal ended up leading to the inner sanctum so I thought I had found a short cut, but it was a portion of the building that was closed off from the rest, and simply functioned as a treasure cache.

I ended up finding three of the Wayshrines during my time in the Vale, though the map indicated that the last would be found inside another location (different map symbol for instance). While heading towards this destination, we came across a vast frozen lake, with a lone outcropping of rock that clearly had a word of power inscribed on it. Of course, as soon as I approached this location, two huge named Dragons burst out from under the ice and attacked. Being rather vulnerable to their breath attacks out in the open, I retreated to an area where I had some cover, and whittled them down with Dragonrend and other abilities.

They were still no match for the Dragonborn. Following the path behind the latter set of dragon bones, we went through a Falmer settlement, which lead us to an icy cave in the side of the mountain. 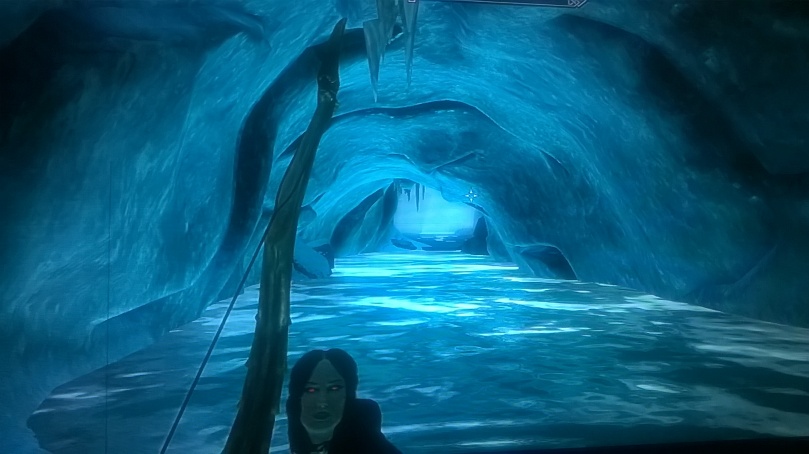 Moving through the cave was slow going as it was crawling with Falmer. At the other end, we came back  out into the Vale, and though Falmer structures were still present, they were no longer around. Here is where we found the final Wayshrine, and the Chantry behind that. Filling the Ewer, we were ready to enter the inner-sanctum. I emptied the contents of the Ewer into the bowl in the latter picture, and the gates opened for us.

Once inside it was apparent that some sort of battle had taken place here. Charus and Falmer were frozen in various places, but very few broke out of the ice to attack us.

We made our way further in, and finally found Gelebor’s brother, sitting upon a throne; frozen Charus and Falmer filling the room. After we confronted Vyrthur, he breaks the spell and we had to kill all of the formerly frozen enemies. He also attempted to cave the roof in on top of us, but we managed to kill everything and survive. He scampered off and we gave chase.

After a brief confrontation between Vyrthur and Serana, it was revealed that at some point he had been turned into a Vampire. He was protecting Auriel’s Bow from the likes of us. We put him down swiftly, and Gelebor appeared to show us the location of the bow.

After claiming the bow, Gelebor blesses some of my Elven arrows with the power of the sun to use against Harkon. We then return to Dawnguard Keep to report back to Isran. 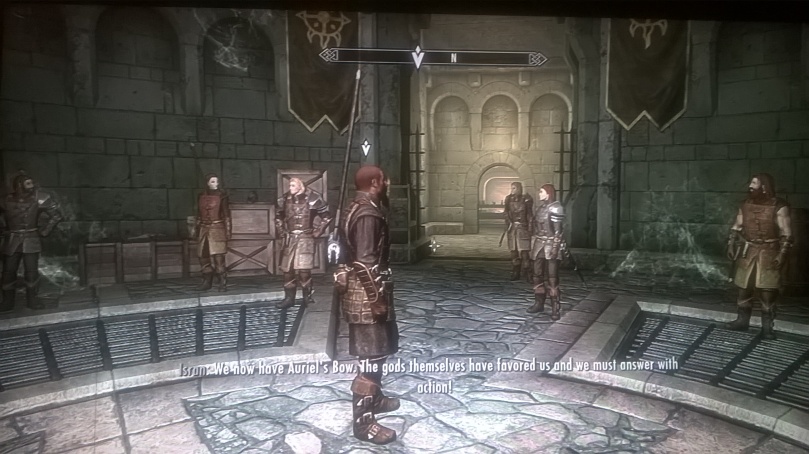 He immediately mobilizes the rest of the Dawnguard, and we head to Fort Harkon to confront the Vampire leader in a final confrontation. Crossing the bridge we were immediately attacked by animated Gargoyles and Vampires, and this battle continued inside the castle, all the way til we find Harkon’s inner sanctum, where Serena and I would confront him alone.

That battle was rather difficult. Not only did Harkon take some serious damage but he was either lifestealing, or had incredibly high health regen. Periodically he would turn to bats and escape to other portions of the room, call in skeleton or gargoyle minions, or create a bubble around himself while floating over the top of the fountain in the background there. When he would, it required use of Auriel’s Bow to break the shield and coax him back into the fight. After quite some time we finally defeated him, and Isran would enter to thank us, thus completing the main story of the Dawnguard DLC.

There are some side quests that I have in my journal and still need to turn in to really be “done” with the expansion, but I wanted to dive straight into the Dragonborn DLC, so I did what I had to do to get on the boat to Solstheim. Turns out I had the pre-requisites done, so I just headed to Windhelm and grabbed a boat ride.

Solstheim appears to be much different than Skyrim already. Apparently the island is part of Morrowind, and is almost exclusively made up of Dunmer (Dark Elves).  I was greeted by a member of the local government on the dock who told me as much, and then I decided to call it a night.

More on my adventures on Solstheim to come soon!