When I arrived on the Island of Solstheim, I was planning on just getting right into the main story line and wasn’t going to let myself get side tracked. That lasted about 5 minutes, and next thing I knew I was being pulled in several directions at once, as Skyrim has been proven to do every time I play it. This is not a complaint either, I love the immersion and the drive the game gives me to explore all the nooks and crannies. Let’s just say it doesn’t take long for Shit to Get Real™.

I did start out with the main quest line, because it was the only real direction I had. I was told by the dude at the docks that I should ask around town for more information about Miraak, since he’s basically the whole reason I was on the island in the first place. I came across “the Earth Stone,” as the quest marker pointed me in that direction. 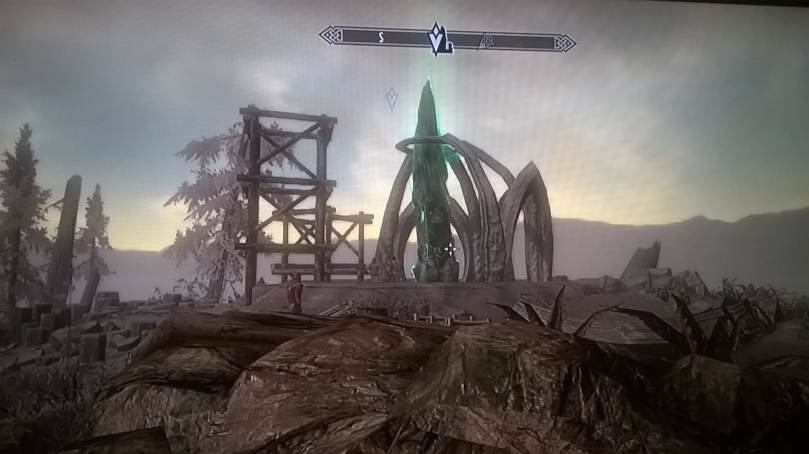 There were some construction workers nearby who seemed a little out of it, as if they were under a spell or something. Shortly thereafter, I was approached by a Dunmer by the name of Neloth.

He points me in the direction of some temple on the other side of the island, and gives me a new location on my map. I figured I should explore the town further before starting the trek though, and that lead me into several side quests, which I had a hard time resisting. See, I’m usually the type who likes to complete everything that comes my way, so a game like Skyrim puts me in a position where I can’t just rush through the game for trophies or just to say I “beat it” because I won’t feel that way unless I did mostly everything on offer. Soon enough I was inside the town’s temple, and was told that their underground crypt was infested by “Ash Beasts,” and guess who volunteered to clear it out? This guy.

You’ll have to forgive the quality of some of these screens, as it’s hard to play the game with a controller and take pictures with my phone, but I manage. So these ash creatures are formed from the volcanic ash from the — you guessed it — volcano on the island. They aren’t too tough though they do seem to cause a burning effect when striking you. The good news is that they all drop various ores in their dead ash piles, so I’ve come up on a lot of materials that can be used to level blacksmithing. I know, I’m the guy who complains about tradeskills in games, but in Skyrim the tradeskills don’t bother me. They’re easy to do, and they give effective rewards. It’s not like the typical MMO where the gear I craft is shit, or I out level it within a day or two. I’m still wearing the Dragonbone gear that I crafted a long ass time ago, case in point.

It was rather easy to clear out the crypt, and I received a small reward for doing so. Moving further in the town, I was tasked with getting an “Ancient Nord Pickaxe” from a miner, who had borrowed it from the Blacksmith. I headed to the mines, and of course said miner had a conspiracy theory. He wanted me to head deeper into the mines to find his grandfather’s remains, whom he believed was killed by some foul force and that the East Empire Company had covered it up.

First off I convinced him to give up the pickaxe, and when I returned to the Blacksmith, he let me keep it. He just wanted “his point made.” So score, new pickaxe for me. Not that it made much of a difference, but whatever. So we were off to dive deeper into the mines (when I say we, I mean Serana and myself, as I decided to keep her along with me).

Navigating the mine was no big deal. There were some spiders to deal with but still, no big thang for a bad ass adventurer like myself. Once we got towards the bottom the appearance changed. It seemed that we were in an ancient Nord burial chamber. This was typical of Skyrim, but we were in Morrowind now, so it was strange to see Dragur. No matter, they were easily dispatched, and I eventually came across a deposit of a new material called “Stahlrim” which according to my trophy list was something I could craft with. We’ll get to that later. Further along there were some bigger baddies, including the Nord zombies with the nice armor who also know shouts.

When we did finally find Gratian Caerellius’ remains, it was clear that the old miner was correct about the conspiracy to cover up the Nord burial chambers.

He had a journal on him that chronicled the events, and his remains were in front of a mysterious door that was glowing with energy. He also had a magical two-handed sword that was a piece of the puzzle. With a strong attack, it actually shot out an energy wave, which was used in opening the door (which at this point was the only want to get out). 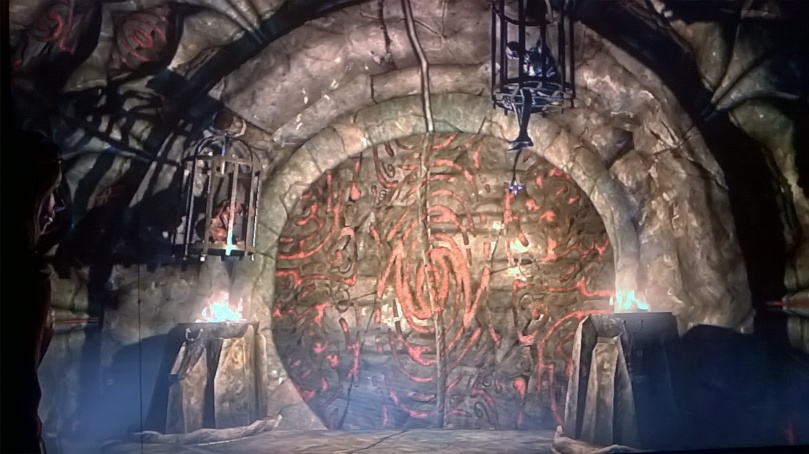 The puzzle was easy enough, and it wasn’t too difficult to get beyond the traps thereafter either. There was an evil spirit that was a bitch to kill off, I believe he was a Lich King, in the fact that he dropped a rather nifty mask, much like one that I used to wear for a while (Krosis I believe it was?). I didn’t get a picture of him because that was a tough, twitchy fight. But he was in the water-filled chamber below:

In a small room nearby, there was a stand with a book on top of it, and I assumed it was a typical book or perhaps a spell tome, but I was surprised to be transported to another dimension once I touched it (which is why I didn’t take a picture, because it seemed so ordinary). So I’m now in another dimension, and there’s a creepy beholder type floating eyeball mass talking to me. 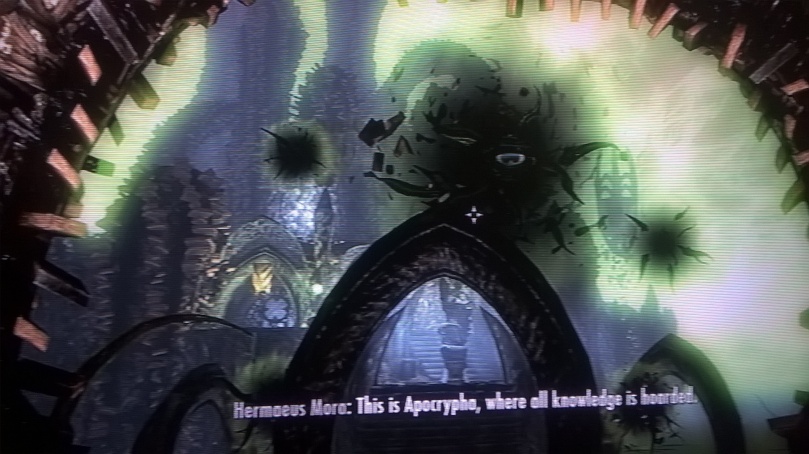 Apparently the plane is called Apocrypha, where all knowledge is hoarded. He tells me that I may consume all the knowledge I want and then leave, for a time. It’s fairly ominous, but eventually I realize I can leave though I have to kill a big ass boss mob. Despite having recently dispatched a Lich King. Yeah, I’m a bad ass, but I believe I already mentioned that.

He doesn’t look that bad in the pic, but he was rather large, and took a long time to kill. Shortly thereafter I found a really big book that granted me a special perk of my choosing, though none were that awe-inspiring. It also held the portal to get outta here. 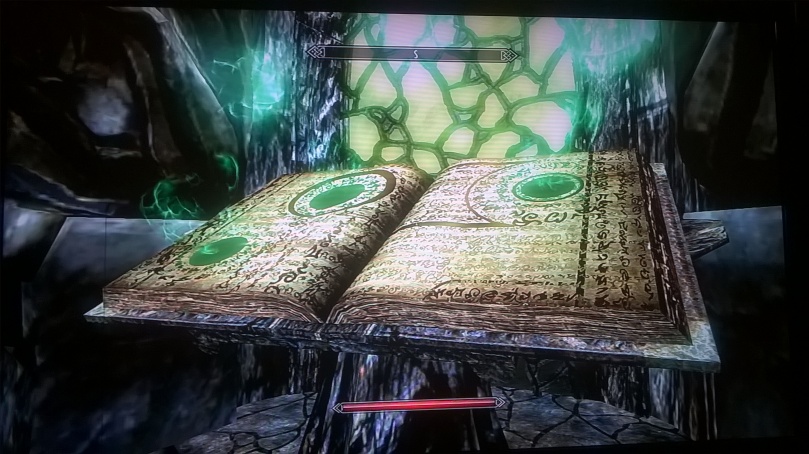 Shortly thereafter I emerged from the Nord burial chamber into another cavern, which had been used by bandits as a stronghold. I cleared them out and found myself on the beach just north of Raven Rock. I returned to the old miner, and got a small reward. From there, I traveled towards another side quest, which was a shipwreck off of the south east coast, where the matriarch of the town needed me to retrieve a logbook. On the way, I came across a Dunmer named Captain Veleth who was being attacked by the ash beasts. I helped him out, and he told me that something had happened at this farm house and needed help figuring out why the ash beasts kept attacking Raven Rock. I found a note nearby, which was a decree from General Falx Carius, whom Veleth said had been dead for centuries. He pointed me in the direction of another fort, but first I was off to the ship wreck.

The ship had been taken over by thieves, and I cleared them out quickly. I found some loot along with the log book and returned it to the matriarch. Then it was time to investigate the fort where Carius was said to be located (possibly). We found the fort with little trouble, and ash beasts were lurking all around. Once inside, there were more ash beasts but I also came across a journal of someone who had taken residence in the fort recently. He described foul experiments using heartstone which he grafted to the long-dead remains of Carius, and somehow brought him back to life. He mentioned that Carius was showing a resilience of mind and continuously attacked him, denying any power the conjuror may have had. Later I found that Carius was behind a locked door, and for good reason. He could summon ash beasts and carried a powerful 2 handed sword. He killed me once before I took him down, and was a rather tough boss fight. But I was victorious in the end.

When I returned to town, it was to Veleth’s delight that the ash beast attacks would stop (I did manage to see an attack happen once, and it seemed rather negligible, but still, I was the hero of the day). 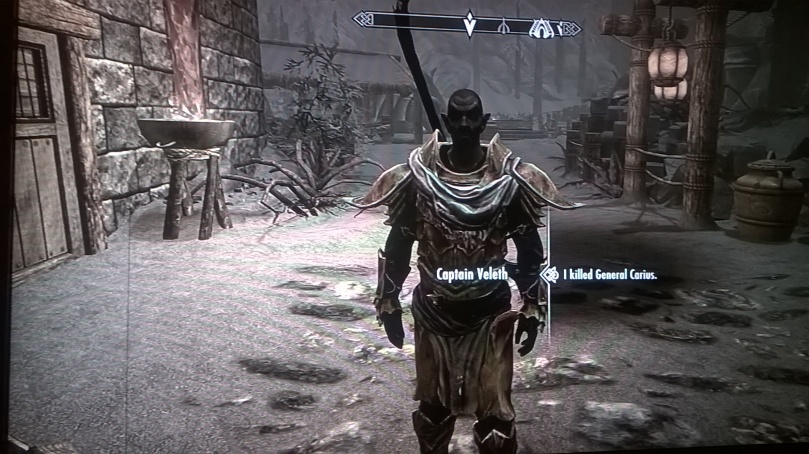 Veleth sent me to talk to the original Dunmer who had greeted me on the docks, but I had decided to call it a night by then. The adventure will continue soon!