When I left off, Veleth had sent me to talk to Adril Arano, who was the first Dunmer I met when arriving at the dock of Raven Rock. He works for the head of the town, Lleril Morvayn as an advisor of some sort. He was worried that members of the house of Ulen were plotting revenge on house Morvayn for some long forgotten sleight. He asked that I find proof of that fact, and he sent me to talk to the proprietor of the Retching Netch. I had been there before, they have an interesting home brew.

Geldis was said proprietor (also the man with the secret brew), and he told me that someone had continuously left ash yams as an offering in the Ulen burial chamber underneath the temple (good thing I cleared that place of ash beasts already!). He told me that if I could figure out who was leaving the offerings, that should point to the surviving Ulens who are threatening Morvayn’s life. So I was off to hang out with some long-dead remains. Also yams. 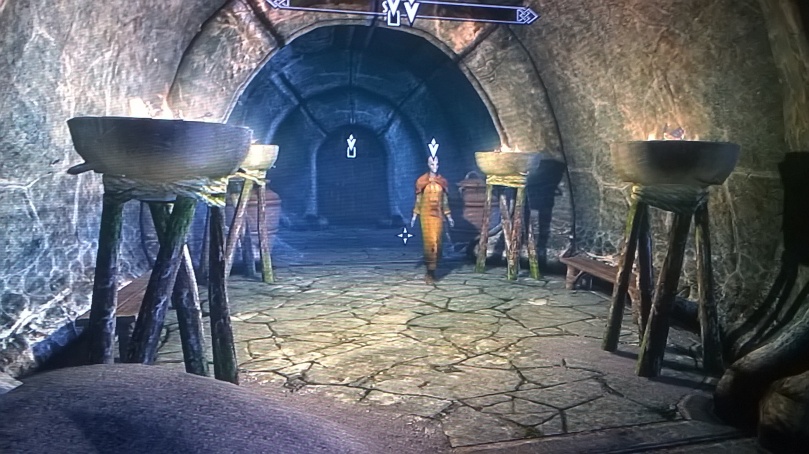 It took a while, but eventually the quest updated. It took longer still for this Dunmer to enter the crypt. She seemed startled by my presence.

Despite the fact that she didn’t need to tell me, or could have flat out denied anything, I still managed to learn of her ties to the Ulen family.

Upon my return with the intel, Adril knew Tilisu’s name and knew that house Severin was related to the potential threat. He still needed proof of some sort though, so he sent me to the Severin manor to look for that. When I asked him what I should do if was attacked, he said as long as I had proof in hand, I could deal with threats as I saw fit.

So this happened. Tilisu and her sister jumped me right as I entered the manor. I had no choice in the matter. Searching around, it seemed that the house was fully stocked with all of the tradeskill stations, and a bunch of items I was tempted to steal. I did resist, though I was allowed to break into the family’s safe. Which is also where I found the proof I needed. Adril didn’t need to know the Severins died before hand, no did he?

Returning to Adril once again, I showed him the proof. He told me that the rest of the Severin family would have to be dealt with, despite the fact that they had seemingly been a boon to Raven Rock. He tells me that he’ll send some of his finest guards to meet me at Ashfallow Citadel, where we can deal with the threat to the Morvayn family.

Along the way, I ran into this character. He was busy digging when I approached. He gave me a sob story about how what he’s digging for will be worth a fortune, but he’s lacking funds to pay for help and that if I was to give him a donation (1000 gold) he could hire men and finish the job faster. He offered me repayment plus profit in return for my investment. The best part was that I wouldn’t have to bother with anything, he would send word once the job was done. Considering the mountain of gold I had already earned at this point on Solstheim, 1000 gold wasn’t much of a risk. But this guy better not rip me off.

By the time I arrived at Ashfallow Citadel, Adril’s cronies were already dead. These were supposed to be elite guards? Pfft. So I head inside the Citadel, and find multiple chitin armor wearing assassins, a bunch of traps, and finally, Vendil Severin, who was an easy kill. Threat neutralized.

Upon my return to Raven Rock, Adril was pleased to hear of my success, and took me to Morvayn himself. Morvayn decided that rather than just giving me coin, that he would reward my efforts with the deed to Severin Manor. This came along with all the crafting stations and loot I mentioned earlier, along with a trophy (only the 2nd or 3rd I’ve earned this expansion). So that’s pretty cool. At this point I have a few more side quests left to work on (plus many more to come across I’m sure) plus there’s still the main questline. I’ve started filling out the map, though I’m sure there are many more points of interest left. 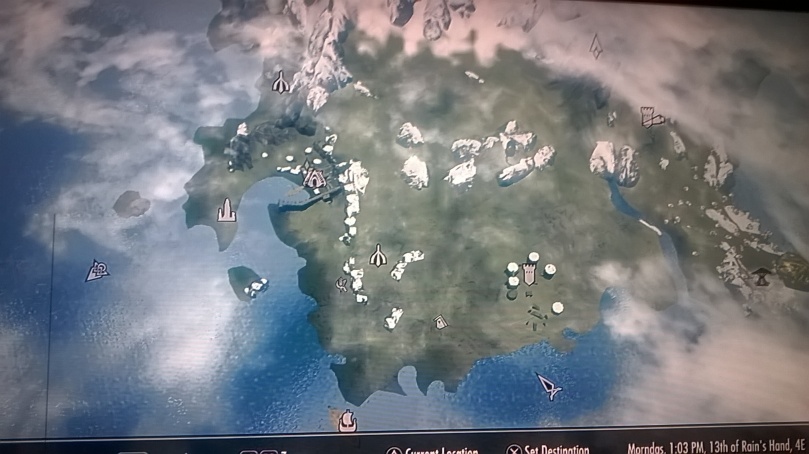 I have also rolled over 100 hours spent in the game. I’m sure that’s a small amount compared to some people, but it’s rare that one game can hold me for that long, let alone one that isn’t an MMO. I probably still have 20+ hours to go if I had to guess, since there’s still some things left to do on the mainland once I’m done here. I hit level 49 last night so I know that once I’m level 50, I can also go back and do a few things for the last trophy I need to get the Platinum. That’s may goal before the end of the month, as my ultimate achievement for Bragtoberfest. Stay tuned, more to come.

Less commentary this week, because I’m running late with my picks. I ended up breaking even with last week, going 10 for 15 again. There were a couple that I just don’t know how they went the other way. One I did almost get the Lions/Saints game correct on score, and I correctly predicted the Denver score, but SF was a few points shy of the target. So I take it as an improvement overall. Let’s see if I can take it to 11 this week.

I don’t see SD beating Denver on a short week, even if they’re pissed about losing to KC.

As much as I want Detroit to lose so the Packers can take 1st place in the division, I don’t see them losing to the dirty birds.

The Panthers don’t got it this year.

This should be a decent game. I vote for the Ravens taking it.

You never know with the AFC west. We’ll say Chiefs.

I don’t see Chicago winning this. They look like an 8-8 team this year.

I think the Vikings might actually win another game.

Eggles? Nah, it’s in the Cards.

Another game I’ll snore through. Browns win another while the Raiders weep.

I don’t see the Colts folding like the Texans, but Steelers are showing some life.

I’d be a fool to think this will be an easy game. The Pack heads to NO’s Superdome, where noise can be an issue and the Saints usually play well there. I still think we’ll pull out the win though.

Cowboys are hot, but I still think they suck. The skins just suck more.

Giants and 49ers are on a bye.

So there you go. Let’s see if I can get more than 10 right this week.