Recently at Blizzcon, aside from announcing a new IP (Overwatch), the Protoss expansion for Starcraft II, a bunch of nothing for Diablo III, and nothing I paid attention to for WoW, Blizzard announced the next expansion for Hearthstone. Called Gnomes and Goblins, it will feature 120 new cards, and those will be available for purchase sometime in December. This means farming gold again to buy new packs, although you can also go through the Arena mode to earn cards from the new set. I still haven’t completed the original set, so I guess that means I have a lot of work to do, but I had found myself rather bored with the game after finishing Naxxramas. I mean I still play here and there, but after a few games I’ve usually had my fill. I have most of the cards from the original set that I want, though a few of the Epics and Legendaries would be nice, but it takes forever to earn the dust for them. Having a new set to work towards makes the expenditures feel better, because there are more to earn, so the first 20-30 packs net you some sweet loot. From there it’s back to disenchanting piles of cards and/or hoping for the best. But I digress.

There have been approximately 45 of the 120 cards revealed at this point, and I can see the uses for many, the synergy between this deck, the Naxx cards, and the originals. A few of the cards from the original set have been nerfed into oblivion too, so adding to the mix makes for more strategy, as there are far more combinations of cards to work with. This doesn’t mean you can’t still run a zoo deck, but it might be modified after the new cards release. I know my zoo deck saw many changes before new cards came out, and since Naxx it’s been solidified, but I can already see boons coming in the new set. Because it would be a long ass post if I was to cover all of the cards that have been revealed so far, I decided to break this up into however many posts it takes to cover them all. I decided this time around that I would start with the class-specific cards, and we’ll move onto a chunk of the neutrals next time. So shall we get started?

Most of the cards that have been revealed are either tinkered items or mech-related. Time will tell how effective this card will be, because if people are stacking a lot of mechs, this card becomes rather useless, particularly if you aren’t using many mechs. It looks to be part of a mech-deck, where you could counter someone without mechs, but until the meta shift settles, it will be hard to say. I like the potential, and if nothing else a 3/5 for 4 isn’t a bad cost. 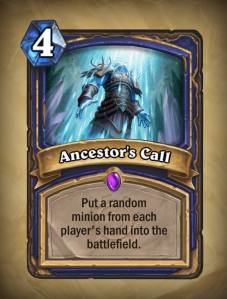 This card is very much a double edged sword. It’s a sure bet if you have a beastly card in your hand, and they don’t have much in their hand, but if they have something better than you, it’s going to suck. How much of a gambler are you?

This keeps with the thematic design of Druids. The ability to choose extra health or attack based on the situation is nice, as are most Druid cards that give you choice. A 3/2 or a 2/3 with taunt for 2 mana is a great addition to any Druid deck, seeing as how much of the time you’re stuck with high mana cost cards.

This Rogue card is much more effective than the last one from the Naxx set. I was super disappointed with that one, needing a combo and having such a high price just to return a minion to hand. This one is cost effective, and gives your weapon more bang for the buck, perfect for Rogues.

Another double edged sword card. Very effective if your side of the board is empty and they have plenty of high health minions, it’s a bit of an equalizer in that sense. Also more effective if you have a high health minion and they have low health, but eventually the blade has to stop, and hopefully it works in your favor. Randomized cards can be nice but can screw you over. Be careful with this one.

This card isn’t bad on its own, being a 2/5 for 4, but it really would only work out given another mech on the board. I wouldn’t put it in a deck unless I was going mech heavy. That seems to be the focus of this set though, so perhaps going mech heavy will be beneficial. The Naxx set focused on Deathrattle, but that felt gimmicky too, and I avoided most of it.

This card is going to be standard for Warriors, I can see that coming already. 5/5 plus 5 armor for 6 mana? Yeah, Warriors everywhere rejoice.

This card feels like a nice buff for the Priest. I’ve always wanted to like Priest in Hearthstone, but I just couldn’t find a deck that would work well enough. I’ve played some good Priests though, and this card will add to their arsenal of annoyance. Synergy with their other damage spells, plus a direct buff for 3 mana? Sounds over powered. 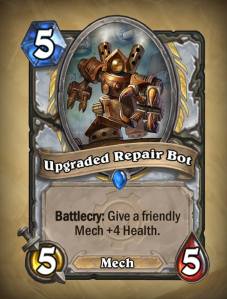 Another card that isn’t that great unless you get that mech synergy going. I’m hoping there are plenty of neutral mechs that are worthwhile to get that type of synergy, otherwise cards like this will be wasted. However, a 5/5 for 5 isn’t bad, and the bonus health can really beef up a taunter.

The opposite of what we’re used to seeing from Priest, this minion actually removes health. I’m curious if this will cause death or will cap at 1 health. Nice to shrink an enemy taunter or big creature without having to throw cannon fodder at it. Looks like Priest is getting some love. 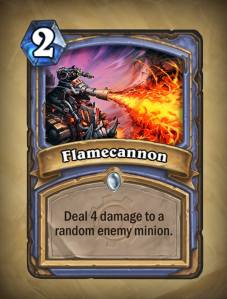 This one is good and bad. 4 damage for 2 mana is almost as good as a soulfire, but it being random kind of sucks. Have to plan that out just right. Mage is definitely still the queen of direct damage.

Another Mech oriented card. Definitely a nice AoE blast, plus you get a 5/4 for 4, so it’s cost effective. Again, have to wait to see what the mech ratio is in the game before I can really judge.

I’m assuming this means that the minion will come from your deck, but some specifics would have been nice. I mean that could mean from anywhere really. I don’t like the random nature of the card, but it you get the right minion for the right price it could be very cost effective.

That’s all of the class specific cards that have been revealed so far. So we’re still waiting on Hunter, Paladin, and a few more from the first few classes. There are a lot of neutral cards I have yet to go over, so expect another post or two on that in the coming days. Until then, happy gaming.