This week saw the completion of another game, a couple of new ones purchased during the Steam “Exploration Sale,” and more MOBA action. I even dipped into another MMO, but that still doesn’t change any of my feelings expressed last weekend. I seem to have more fun when I’m playing something else, and those are the same feelings I had when I left the genre for years. It’s a turbulent relationship.

That’s part of where the name for this blog came from. It’s a bit of an aside, but it’s truly where I was at when I decided to name change and it has held true for a few years now. That inner monologue that goes something like:

“I feel like playing an MMO tonight.”
“But you don’t like them.”
“Yes I do, I just get annoyed/bored when it feels like I’m repeating the same content that’s presented in different packaging.”
“But they are all basically what you just described.”
“I know. But I’m going to give this one a shot anyway. Maybe it will suck me in and I’ll be able to overlook the things that annoy me.”
“That’s what you said last time.”

It truly is Me vs. Myself and I. Sometimes I win, sometimes they do. Does that make me crazy? Probably. The game in question was Rift, I picked up my Cleric who was level 38 and leveled him to 40, but then I started playing other things and I haven’t been back. Like I’ve said already, I’ll most likely only play super casually until something new comes along that piques my interest. Here’s a shot of my Cleric in the Droughtlands: 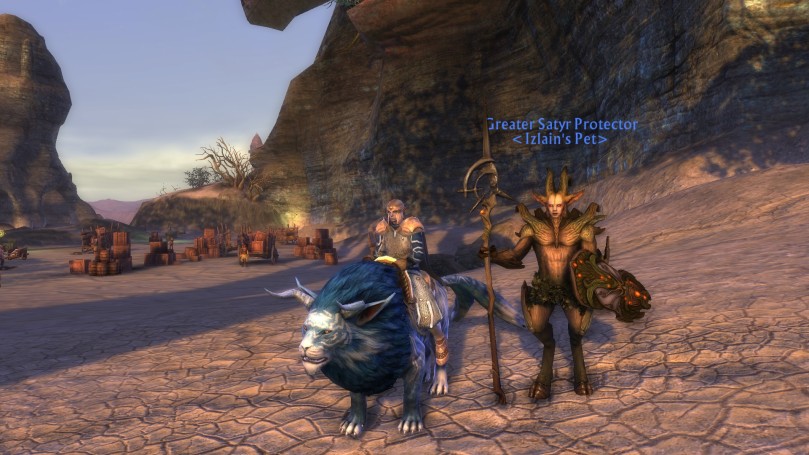 So anyway, this past week I blogged about League more than once, but focused on the newest Champion reveal, talked about Football and Playstation Plus. Some of that may appeal to you, some of it may not, but they have been staple topics on the blog for a while now.

Really, I just needed quick content for the week because of holiday preparations and celebrations, along with focusing most of my efforts on completing Demon’s Souls. I didn’t realize I was as close to the end as I was, despite having three worlds worth of content ahead of me at the time of my last writing. When I left off, I was facing Black Phantoms after the Penetrator fight, and one of them was giving me trouble (the one with the tower shield and big ass spear). I ended up finding an easy fix, where I could cheese him to death. Basically if you run back to the “zone line” (where the archstone is sort of acts like a barrier where most enemies will not follow) and wait for him to give up and walk away, you can shoot him in the back with an arrow. This is a long process, but eventually he will die. The final Black Phantom had a bow and arrow, so I just matched wits with her in ranged combat and won. She dropped the white bow which was a nice upgrade to the bow I had been using. That was just the beginning of the 1-4 zone though, and the rest of it entailed quite a few soldiers and knights and a Dragon that would perch in two separate places and 1 shot you with fire if you didn’t time your run correctly. This was my biggest hurdle of the level, but eventually I managed to find the perfect spot where I could shoot it with arrows (somewhere in the ballpark of 250) til it died. Further runs were no longer impeded by that fire breath, and there was much rejoicing (along with the dragon’s demon soul). There was another Black Phantom, this one modeled after Ostrava, whom I had rescued in 1-3. Thankfully the bastard was pretty easy, and dropped a runic sword and shield that were nice upgrades to my current gear (with heavy magic defenses). Past him was the next boss, King Allant, or the false King Allant if you prefer (and already know the story).

He was kind of hard, it took me a few tries to finally down him. He wasn’t overly difficult he just breaks your guard too readily, and also drains your soul level if you happen to get caught in one of his attacks. That was a pisser. I lost a couple levels during the fight til I knew what to look for. Still, he went down, and it was on to the third world: The Tower of Latria.

The third world was composed of a dark and gloomy prison, mysterious towers, and a blood swamp. The bosses encountered were the Fool’s Idol, Maneater and Old Monk. I had a couple of deaths working my way through the prison, but the first boss was rather easy. The tower section was rather easy as well, though the Maneater was a son of a bitch. The reason for this was that once you had him down to about half health, he would summon a copy of himself, and then you had to deal with two of them. My best advice for that fight is to utilize the brazier on the platform for cover and to be patient. Eventually you’ll kill them both. From here, the game seemed to drop in difficulty. I’m not sure if it’s because I had farmed earlier levels and had a high soul level, along with a combination of good gear, or if the developers ran out of ideas to keep things super difficult. Honestly the game went from frustratingly difficult through most of the first two worlds to ridiculously easy. I only died 3 times after the Maneater fight. worlds three, four and five, and not to bosses, only during the levels. I don’t want to think about how many times I died in the first two worlds. My final thought is that I just finally understood the mechanics and became “good” at the game. Perhaps it’s a combination of the factors listed. Right after the Maneater fight, you ascend a final tower and kill a few Black Phantoms, and then are attacked by the Old Monk, who himself is a Black Phantom. He would have been super easy except he would heal himself quite often so I just had to out damage him and try to hit him when he went to cast a heal or eat an herb. I still beat him on the first try though.

World three was a cake walk. The entirety of the level was based around a big castle on an island. I was careful and moved through slowly, and eventually made it through each stage with little trouble. I really can’t say much more than that, because I was shocked at how easy it was to blow through. The Shrine of Storms and the bosses Adjudicator, Old Hero, and Storm King posed no challenge, I beat them all on the first try. I also killed the Vanguard, who is standing in 4-1, and didn’t move while I shot him with arrows til he died. I’m not sure if that’s a bug or working as intended. He was the Demon who kills you in the tutorial, so it was nice to get revenge.

The final world was now upon me. During the course of world four, I picked up the Adjudicator’s Shield which regens health, a ring that does the same, and a cursed katana that drains health, but had good damage and a bleed effect. The ring/shield countered the health drain from the sword and I used this setup along with my fluted armor set and white bow for the remainder of the game. World 5 was tough to get through because of the poison and plague effects throughout, but the bosses were easily killed with my bow, and that was surprising. I literally stood there and fired arrows into the Leechmonger, Dirty Colossus, and Maiden Astraea. I supposed if I didn’t have the bow I would have had a tougher time, particularly with the latter boss. She had a minion who was an NPC with a huge 2-handed club that hurt. He killed me once, then I found a nice spot to just shoot arrows at the maiden, and avoided him altogether.

Upon killing the maiden and returning to the Nexus, the sword on a statue above the weird pool fell and shattered the pool (which now seemed like glass — I know, weird) and opened up a new area. The Witch urged me to come down there with her. I followed, and we ended up on a beach, where a huge tree-like formation landed, a mouth-like opening in the front awaited us. I entered and had to fight the real King Allant, who was kind of just a blob. He died with multiple arrows as well. Too easy for a last boss in my opinion. Afterwards the Witch told me she would calm the Old One back to sleep, and urged me to go back to the Nexus. Roll credits.

And now I’m ready to move on to Dark Souls, which I happened to pick up during the Steam Sale. I also picked up the expansion for XCOM, Enemy Within. This is an expansion in the same vein as expansions for Civ games, in that it affects the entirety of the game, meaning starting a new playthrough is the best way to experience all it has to offer. Luckily I got a free copy of XCOM: Enemy Unknown for the PC earlier this year, so picking up the expansion on sale really gave me a reason to play the game again (along with the fact that I never completed a game of the original). I did check it out a little bit, but I’m going to hold off for a while before I really dive into it.

Otherwise I’ve just been plugging away at my favorite MOBAs. League of Legends had a double IP weekend that is still going for another 5 or so hours, so I’ll probably get a couple more games in tonight. That’s about all for this week. Look for more on Dark Souls in the coming week.