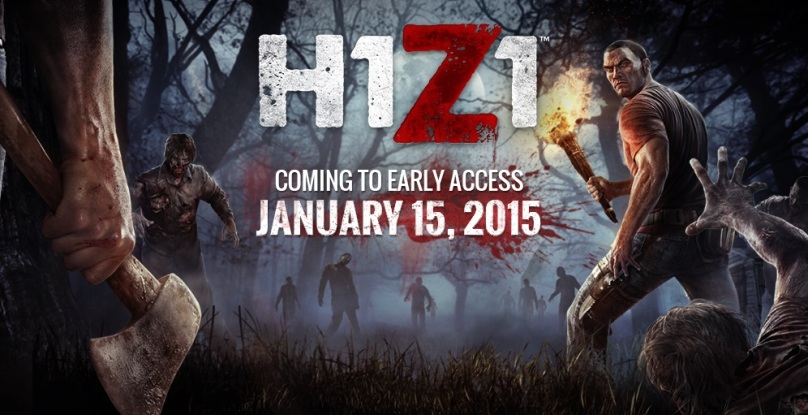 It’s no secret that H1Z1 has finally been announced for Early Access Alpha, starting on January 15th of next year. Also, it shouldn’t come as a surprise that I’m whole heartedly behind this game and hope for its success. I’ve been talking about this game since we’ve learned about it earlier this year, be it on this blog, on my podcast, or on Twitter. Not only am I a fan of zombies and that sort of post-apocalyptic storyline, but I’m a fan of SOE and what they’ve done in some cases with previous MMOs. I know, there has been some mismanagement in people’s eyes, particularly with SWG, but as a whole they haven’t let me down with the Everquest games. This is a whole new direction for them, and though we have a market flooded with open world PvP survival games (or just survival/building sims without the PvP elements), many of those games were simply cash grabs. Games like DayZ were a mod for an existing game, and have been in a perpetual state of Alpha for so long it doesn’t seem like they will ever come out. Others like Rust or The Stomping Grounds have similar problems, where they are a buggy mess and made by small companies that might not have the corporate backing or funds to really see their dreams come to fruition. I don’t foresee H1Z1 having these problems for a multitude of reasons.

Sure, going into Early Access Alpha can be a risk for the developer, in that the game isn’t finished and people tend to forget that when they are overly critical of something. It’s risky for the player as they have to give some money out before actually getting the finished product. Personally, I have been rather picky when it comes to the games that I purchase which are in Early Access, because I don’t want to get burned. It has to be something that really appeals to me, and some of the games that I have dived into have given me a great return on investment (The Forest and Nuclear Throne come to mind). I haven’t felt burned by SOE in the past. I didn’t play the games which had the stigma, nor did I feel put off by any changes they made to games that I loved to play. I also know that they have that corporate backing to make this game come to life, to see their dreams fulfilled. Just listening to the guys in streams/videos and how Smedley talks about H1Z1, I can’t see them not giving anything but 100%, and they really do seem to care about the players. The open communication used throughout the development process to this point has been phenomenal, and they already have most of the features that I cared about integrated into the game. There’s more to work on before the January release date, and they already have some of groundwork laid for more that they plan to add. I see this as an optimal time to get involved, where my feedback could help shape the game to come. Plus, it’s Zombies. And PvP. What could possibly go wrong?

Fanboy-ing aside, I honestly feel that this is the MMO I’ve been waiting for, for the longest time. People would probably point out that Landmark had a similar game plan, and they’re still in Beta and who knows when the game will actually release. For one, the Early Access for H1Z1 is only going to cost $20, so I don’t see that as a lot of money, nor do I think that’s too much to charge to let me see the game way before release. I’ve been hyped for this for so long I don’t want to wait any longer. It’s not as if they’re charging $150 for access (Landmark) or even for an expansion to an existing game (Rift). Even if H1Z1 was to stay in Early Access for a year or more, at least I could play it in the interim, and as it changes I’d have new things to check out and write about. I’ve been doing that with The Forest for most of this year, so I don’t see that as being an issue. It’s just like Smed himself has said:

“What you’ll be playing January 15th is a really fun game, but it’s early. It’s everything Early Access should be – a fun and compelling game that isn’t finished. Our goal is to have you help us finish it and have it be a game we can build a large community in over time.”

I’m going into it expecting this, so I don’t see how it won’t meet my expectations. He also addressed the naysayers who were asking whether or not this would compare to DayZ, or somehow surpass it as far as being “feature rich”:

“No it won’t. We’ll get asked that question a lot and I wanted to be up front about it. We’re not as feature rich and they have a lot of really cool stuff we just don’t have yet. That being said, we’re also a different game. We’re an MMO and our goals are to create a large scale world that gives you the incredible feeling of being a survivor in a zombie apocalypse.”

Seems to me that’s about as up front as you can be, and I applaud their decision to go ahead with this, even if people will draw the conclusion that it’s not finished, or not good enough just yet. I relish the idea of being able to get in on the ground floor of a new MMO — something I’ve never done before. I’ve not done this because there hasn’t been one that’s come out in a very long time that I felt this passionate about. So I’m going to be one of those people checking it out as soon as possible. Who wants to join me?

There’s a great FAQ on the official site that answers more questions about Early Access. You can check that out if you have more questions.