I’ve talked about Heroes of the Storm, the new effort by Blizzard to take an existing genre and polish it, more than once in recent months. For the past few months on Twitter, I’ve seen rounds of conversation revolving around getting into the Technical Alpha for the game, and finally that day came for me as well. I was probably getting ready to play Diablo III or a few rounds of Hearthstone, when lo and behold, there was a button for HotS, and I installed it rather quickly. It was no secret that I had been anticipating this day as a MOBA enthusiast, but it didn’t take long for me to realize that this game is not going to dethrone either of the other “big ones,” but will probably be popular with people who haven’t touched other MOBAs. The main reason for this separation into “camps,” comes down to one word: Depth.

Let’s just talk about a basic run down of how the game works, and then I’ll get to my meaning.

The game starts off by asking you your level of comfort with the MOBA genre. This should have been a red flag to begin with, but it is a fair question. I picked one level underneath “Master” because I am confident in my abilities though still wanted to see a tutorial of sorts. The game jumps into said tutorial at this point and tells you the basics of what you’re doing. 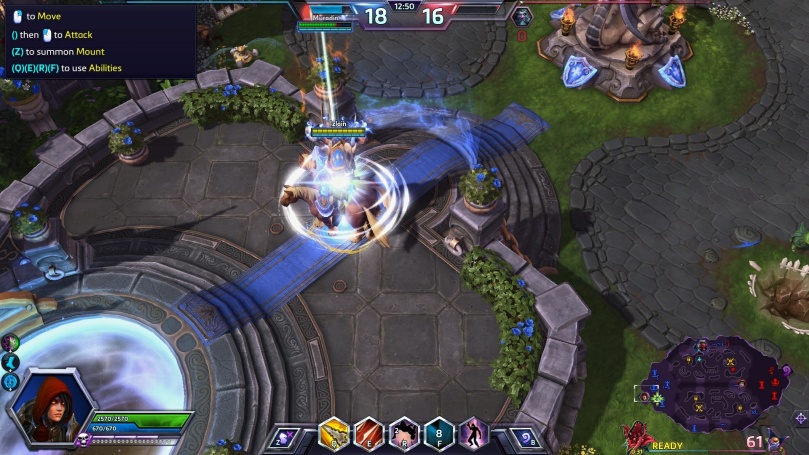 Of course the game is also set up as a bot match to get you started, so your AI teammates go through their motions while you fight against other similarly programmed bots. This typically ends in ridiculously lopsided affairs, because one human makes all the difference. Afterwards I was prompted with the option to train more against bots, or go online. I stuck with bots because I hadn’t see enough of the game yet to be prepared for PvP. Turns out, having pre-ordered Reaper of Souls, I received my first hero for free, the Demon Hunter Valla. Of course I needed to try her out, and she ended up being much more entertaining than Raynor was in the tutorial.

At this point I decided it was a good idea to familiarize myself with all of the other heroes, see what the cash shop had to offer, and see what sort of meta game exists. As far as metagame goes, it’s pretty much non-existent. Yes, you do have a background leveling system of sorts, but that just opens up further passives and skill tweaks that you pick in game for each character. You can also buy all of the heroes for either in-game currency or cold-hard cash. That’s about the only positive side to the marketplace, as the rest of the fluff items that I’ve spent money on in other games like League of Legends, is grossly overpriced. Remember the “Sparkle Pony Debacle” from circa 2010? This has that sort of feeling too it. For instance, want to buy a hero for real money? ~$10 please. Want a skin? $10+ thank you. Want to skin your stupid mount that you use once in a while in the game? How about $20? Fuck yeah!

This item in the cash shop didn’t irritate me. It’s resonably priced, it works just like boosts in League, and it’s for people who have more money than patience. This one doesn’t bother me, and I might even have used it, were I more interested in really investing time into the game. 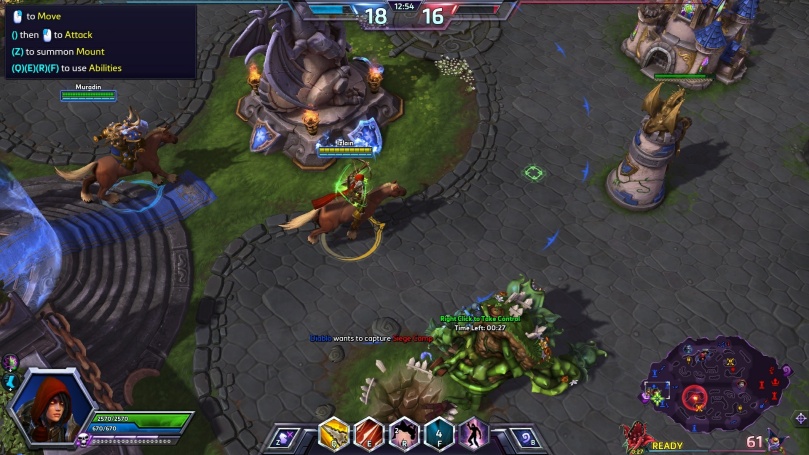 Aesthetically the game irritated me in two ways: one was that the camera feels too zoomed in, the characters are too big (and look hokey next to the towers and buldings), and it cuts down on your field of vision. Second, the combat didn’t feel as fluid as it does in other MOBAs. It didn’t feel as responsive, and didn’t feel like Blizzard’s typical level of polish. This could be chocked up to being an Alpha product at the moment, but I have a feeling they just don’t have the right engine to do what needs to be done. I’m no programmer so I’ll just leave that alone, I’ll finish by saying that it just doesn’t feel right to me.

Where I see a problem with this game, especially for people who play other MOBAs seriously (and besides the fact that the cash shop is ridiculous), is in the depth department. Your character will level up from 1-20 in a given round (provided that it lasts long enough) and will open up their four main abilities progressively (like in any MOBA you’ve played) but at certain points will also give you “upgrades” that will either do something passively or add some effect to your existing abilities. Think of it like the way skill upgrades work in Diablo III: Each skill has runes that you get to pick and choose from each match. That’s where the hero’s metagame comes in, with your earned match xp going towards the hero you used, and you open up new options for them in future matches. This is all in lieu of the 100’s of item combinations that you can choose from in games like League and Dota. That’s great for someone new to the genre, but even “baby’s first MOBA,” Strife, had item builds. And I actually enjoyed that game for a time.

There’s also no vision control. The jungle has a variety of mobs that once killed will do things for you, like running up a lane, or in the case of one map, becoming a controllable monster usable by your team. These are both reminiscent of Strife (the Monkey that pushes a lane for you after killing a jungle mob) and League (the new changes to Smite and the buffs from different camps). Really, it’s the same damn game we’ve all been playing for years, but with a different skin and so much less depth. Another huge pet peeve for me is the scoreboard: 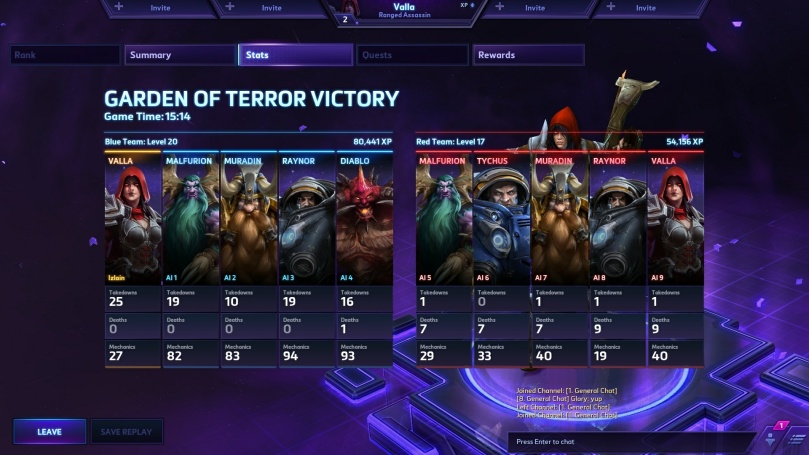 You’ll see in this round, my team won and my 25 “Takedowns” was the top score across the board. I had at least that many kills by myself, but the game doesn’t give you kills and assists in separate categories, it combines them into takedowns. Do towers and other buildings go in there too? I don’t know, but I do know that 25 Takedowns sounds a lot less awesome than 25 kills, 0 deaths, 2 assists. I know that this is a purposeful design choice so that everyone feels like a winner, like they contributed, even though the are providing significant less DPS or support than others. Mouthbreathers get Takedowns. In the words of Jim Jefferies:

Also, what the fuck is Mechanics? How’s that for nondescript? Apparently I have worse mechanics than everyone on my team, despite out performing all of them. Where’s the gold-per-minute metric? This just doesn’t mesh correctly in my mind. More lack of depth.

All in all, I find that the lack of depth and lack of polish on the gameplay itself isn’t conducive to me wasting my time with this title. Knowing it’s free to play and I’ll have access indefinitely from this point, I will try it again in a few months and see if anything has improved, but I don’t see this game being worth my time. It might be worth yours, if you haven’t taken your training wheels off yet.

6 thoughts on “Hot-mess of the Storm”