I have had this relationship with gaming for as long as I can remember. Well, I suppose it didn’t begin until I was an adult, but still, it has been a pretty regular thing for many years now. Tumultuous as the sea,  I flow into being a hardcore gamer, and then ebb back to the casual side of things. This usually corresponds with my schedule, and it seems that I’m currently putting other things ahead of gaming. A few months ago, it was the opposite. This is my State of the Game.

This week I put more time into playing games, but only played a few and didn’t play any for super long chunks of time. First off, I spent some time with the new Playstation Plus offerings, but I talked about all but one of those on the last podcast, so you’ll have to listen to that for my opinions there. The final game I hadn’t tried to that point was Prototype 2, and I have since played it for a while; long enough to get a decent enough impression of the game.

Describing Prototype 2 is easiest if I compare it to Resident Evil and inFamous having a baby. It’s a bit more cinematic, has the gore and wacky virus factor to be compared to Resident Evil, along with having an open-world setting and super-powered movement and combat to be compared to inFamous. It really does feel like a mash-up of the two franchises. I didn’t play the first game in the series, though there is a video primer you can watch before you dive into the game, and the game feels like it does a good job of bringing you up to speed. I didn’t have the whole picture, but I suspended any disbelief and enjoyed what was presented nonetheless. The combat leaves a little to be desired, as far as being semi-repetitive, but I assume new powers and other bits to add some depth will come along as you progress. It didn’t seem to have the same open-ended feel to it as far as being able to just roam the streets, but I was pretty much sticking to the story missions. I’m going to go out on a limb and say that it probably ends up playing just like inFamous after a couple of hours. Overall I liked what I saw, but it’s not a game that everyone will like, nor is it ground-breaking by any means. It’s an overall average game and that’s fine when you play stuff casually.

Snowdown ended in League of Legends, and Riot made an announcement that they were going to be giving out a free mystery skin for everyone who made it through 2014 without any bans or restrictions. Good behavior pays off, and it seems that the vast majority of the player base will be getting that bonus. I checked each day after the announcement was made and finally, was greeted by this message:

As you can see, right there it tells you which skin was randomly chosen for you. My reward for good behavior was Infernal Alistar. This is cool, and kind of sucks. But that’s just me being entitled. I love the skin, it’s one of the better looking ones for Ali, but he’s a champion I rarely play. As in, if I get him in ARAM I now have a skin that I’ll wear, but I’m not picking him under normal circumstances. In case you are wondering, here’s what the skin looks like: In other League news, I hit 6300 IP again and decided on purchasing Azir, who was the new champion on the block not too long ago. 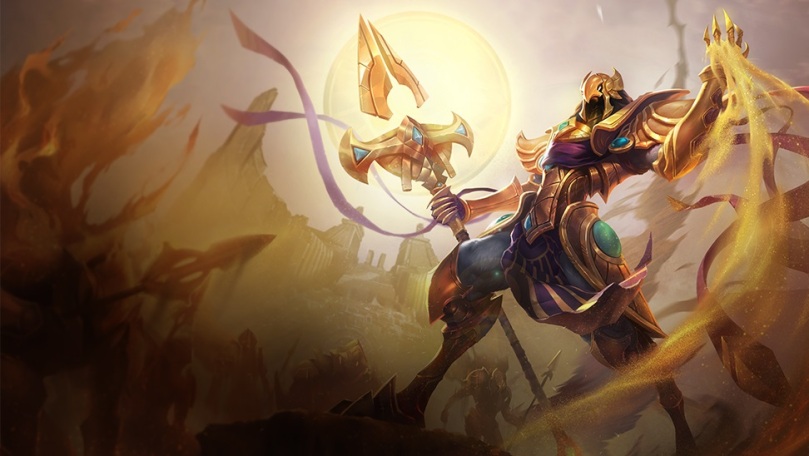 I somehow missed playing him during his turn in the free rotation, so I tried him for the first time last night. I have to say that I enjoy his kit, but it takes some getting used to. I’m good at the whole juggling attack and moving when I play the game, but when using his soldiers their attacks cancel your movement, and the rotation feels a little different. Practice will make the difference.

I’ve also spent some more time on my Hardcore Monk in Diablo III. He’s pushed his way further into Act V, and recently opened up (and maxed out) the Mystic vendor. So I have mostly everything open in Hardcore mode now, aside form Adventure mode which I’m hoping to have open very soon. Then I can at least choose which mode I want to play when playing on the Hardcore side of the game, along with having all of the options open in the camp. He did manage to hit level 48 last night, and picked up a couple of upgrades along the way. Here’s a look at his gear, from the Anook Gaming Identities page. And here’s what he looks like in game at the moment:

Lastly, I’ve still been plugging away at Nuclear Throne. A couple of the recent updates have added in some new mutations and guns, along with tweaking existing bits of the game. I don’t have anything visual to share on this front, but here’s a link to the recent patch notes.

That’s about all for this week. I’m hoping to be able to get into H1Z1 soon so I’ll have plenty more to write about on the MMO front. Til next time, happy gaming!