I spent the majority of yesterday thinking I wasn’t going to get into the Early Access for H1Z1 right away. I also spent the day reading about the game, and the issues it was having via Twitter and Reddit. Not only was the game just released on Steam, but it is an Alpha version, and as such SOE was charging a fee to get involved (but also using those fees towards development costs), despite the game being designated as a free to play title upon release. I didn’t see an issue with paying a little bit, particularly when the money spent goes towards things you would buy via micro transactions in the RMT store once the game was live. So it’s not as if you weren’t getting your money’s worth, unless you are a supremely entitled gamer who isn’t willing to deal with some issues a game might have during its launch, particularly one that isn’t even a full release. Besides, it’s not as if you are paying a subscription fee, and even if you were, you’d probably be compensated with more game time because of these issues. One thing I will commend SOE on is the fact that they have been so transparent about everything, and literally blowing up Twitter and Reddit with feedback as to what is going on. They know the issues, they tell you when they figure out the problem, and tell you when it’s going to be fixed. Looking back at the ArcheAge launch, Trion was mysteriously silent when things weren’t running smoothly, and most people who played that game didn’t bitch nearly as much as those who have been involved with the H1Z1 launch.

Another issue that cropped up was surrounding “lies” perpetrated by SOE, calling the game pay to win. At some point during development streams, it was said that there wouldn’t be a way to buy guns or ammo via RMT, and yet there are airdrops that can be bought, which have a percentage chance to drop guns and ammo (albeit in small amounts, hardly game-breaking). These were designed to be a public event, in which the purchaser of the air drop will be vulnerable to anyone else coming along and killing them to take the loot. Sounds to me like it’s a gamble to have an airdrop called in, as someone else might get your stuff that you paid for. Sounds to me like the people bitching about this feature should be lying in wait to try and take the loot that they didn’t pay for. Doesn’t seem game-breaking at all, but there has been some clarification about changes coming to airdrops today. In another respectable move by Smedley, people who were clamoring over this issue have been offered a no questions asked refund. I guess bitching will get you your money back at least, but seriously, why not see how the game changes during the Early Access period? At most you paid $40, at least $20, and you couldn’t have possibly seen enough of the game to know what’s what, especially since there were login errors and server problems til later on last night. Knee-jerk reactions for the win.

Many shitty reviews have popped up on Steam, and Reddit is awash with negativity. However, there are some people who aren’t so mad about things, and have a more realistic view of the state of the game at this point. I was happy to see this thread talking about the features people like and how much they are enjoying the game. Like I said, I didn’t think I’d be getting involved right away, and was okay with waiting around til most of the initial issues were fixed before trying to pick up the game, but my father decided to get both of us copies of the game, so I was able to check it out for a while last night. When I first tried to get in game I was met with similar issues, but I kept an eye on Twitter and once things were said to be working as intended, I tried again. This time I got into the game, and was plopped down in the middle of nowhere, while rain poured from the sky. 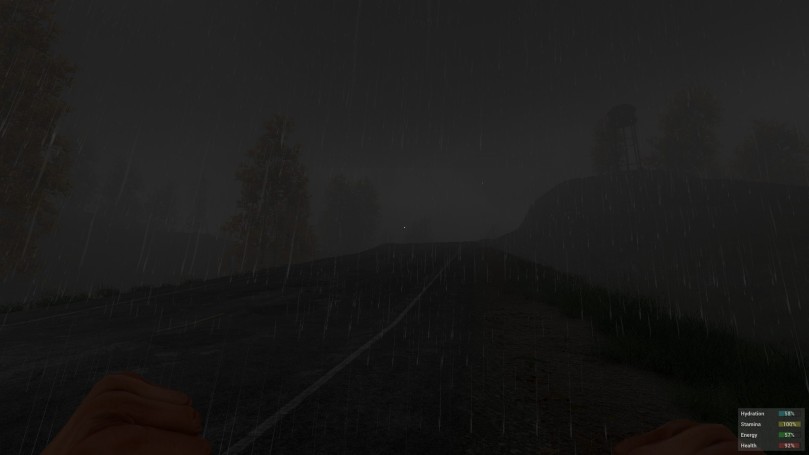 Equipped with my fists and a flashlight, along with the clothes on my back, I wandered around until I found this road, which I followed looking for signs of civilization.

I found this abandoned van on a bridge, hoping that I might be able to drive it. Unfortunately it was “wrecked” and didn’t have anything inside of it either. Moving farther down the bridge, I found some Zombies and saw some buildings up ahead. 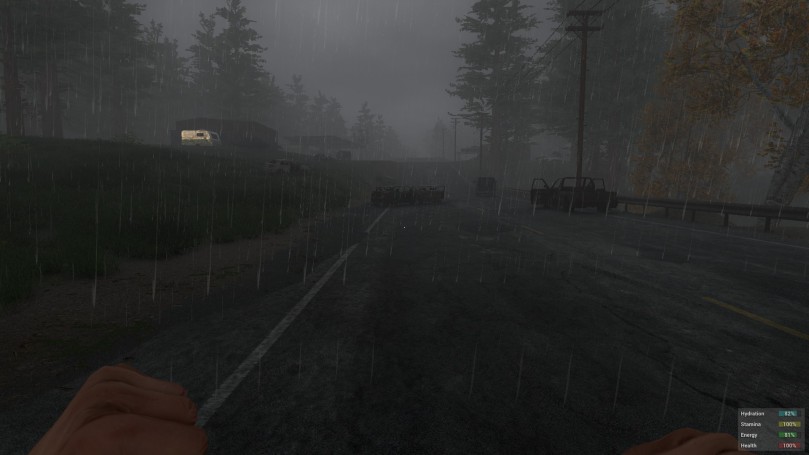 I searched vehicles and buildings, eventually finding some more gear, including a backpack, an axe, and some food. Another vehicle had some binoculars inside, which I figured would be of good use. 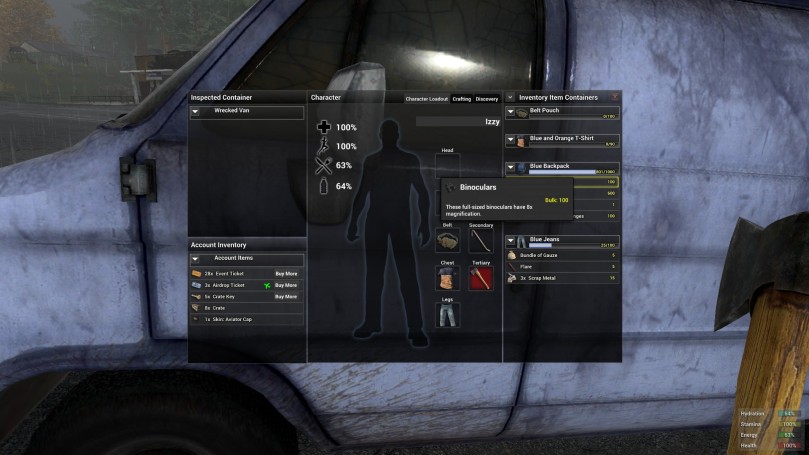 The rain eventually cleared up, and as I was rummaging through a garage, I spotted another player skulking around outside. 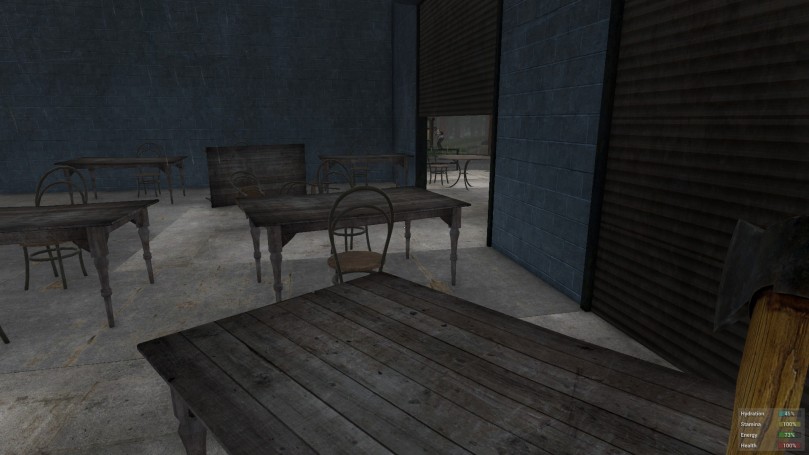 He’s through the door reading a sign, hard to see unless you click on the picture. I approached him, and he didn’t want none, heading another direction. I saw more houses up ahead and decided to keep scavenging. Coming out of one of the houses, I saw this guy running around swinging his fists wildly. He came at me and we fought… and somehow after hitting him repeatedly with an axe, he still managed to kill me with his bare fists. Don’t ask me how.

At this point I was frustrated with something. As you can see the above screenshots show me in first person view, and according to the settings, “mouse button 4” would change the camera view. There wasn’t any alternate listed. I did some searching after logging out of the game, and found that hitting “T” will actually change the camera view as well. I logged back in to try my luck again, but this time I’d run around in 3rd person.

Oh look, I’m back in the middle of nowhere again. And my stuff is gone. That’ll teach me to die! I headed off to find more stuff.

This outpost provided me with some food and other gear, but no backpack. I’ve also not seen any form of water to this point. Hydration looks to be an issue. I did find another pair of binoculars and took a look around the area.

Another ground of buildings on the horizon. I would head there to look for other stuff. Lucky me, I found an AR-15 inside, but alas it didn’t come with ammo. I still carried it around for a while though.

At another little outpost further along the road, I stumbled upon the first usable vehicle I had seen to that point. It was only a jeep, but I was prepared to go running around at a faster pace. Unfortunately it was lacking spark plugs, and I didn’t have any of those on me. Nor did I ever come across any. No matter, there’s other things to see and do.

Apologies for all the dark screens, it was night time and it looks a bit brighter while actually playing the game. I followed a road for quite a while until I came to “Pleasant Valley,” where I hoped to find some water as I was starting to dehydrate. 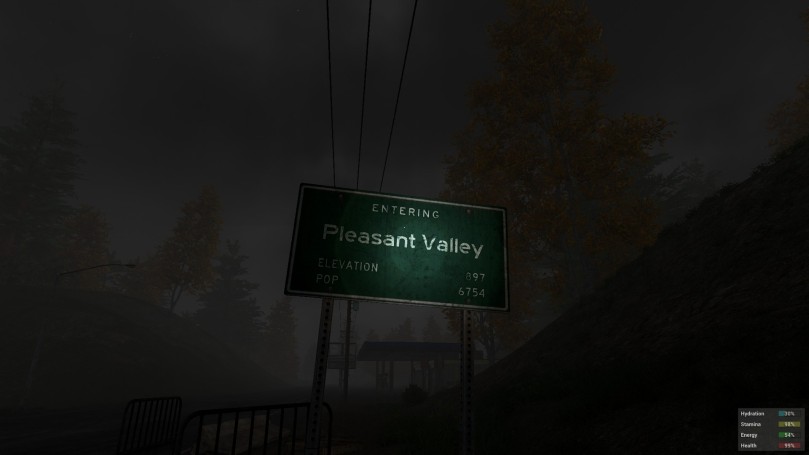 The sun started to come up, and I found a grocery store and a restaurant where I found plenty of food and water, a couple of handguns with no ammo, and a couple of people wandering around. I picked a server where the population was listed as medium rather than high (when I first tried that I was annoyed to find a queue), and it was getting late at this point so people weren’t super abundant. Zombies also felt somewhat “dumb” because they didn’t really react to things the way I would expect. That was mentioned on Twitter as being something that would be fixed up with a patch. We’ll touch back on that later.

I got into an apartment building, which was something I remember seeing in one of the dev streams, and the dev had said that sometimes guns spawn in these buildings. I checked all of the rooms and found plenty of supplies, and when I got to the roof, this sniper rifle and some bullets were waiting for me. Score! I finally have a gun that’s more than just a paperweight. I logged out on this rooftop, where I’m hoping I’ll be when I log back in (not sure with all of the issues with servers). Will be fun to ninja gank some fools aimlessly wandering around the town 🙂

Overall I’m happy with the game so far. It’s graphically pleasing, the ambiance is just right, and I like the various meters you have to watch to survive. I haven’t engaged in much PvP yet but it feels like it will be cool. I’m looking forward to trying out vehicles and for the Zombie AI to be improved. About the only other thing I see missing right now is the ability to form groups or guilds and things like that, along with maybe a world chat, but this is a different type of game so perhaps they don’t want those features in it. I’m okay with being a lone wolf for now. Excited to see the game develop. More to come as I experience it!