I know, I’m late again. Yesterday was spent watching the playoffs, and then wallowing in misery because of the horrible comeback we let happen. The Packers should have went to the Superbowl… but let’s not get into that. As you can see I made a little banner for this segment, as it is a regular feature on the blog, and I’ve gotten in the habit of having banners for my regular columns (By The Numbers, Couch Podtatoes posts). And, if you’re wondering about the post title, it’s not a reference to Smed (prez of SOE) being actually dead, but rather a reference to a server name in H1Z1. I thought it was fitting, as this week I spent most of my game time in H1Z1, so that’s what we’ll be covering today.

After my Impressions post about the game, I have had a few more sessions with H1Z1 and I honestly love it. There is something new around every corner, I don’t think I’ve seen even 50% of the world yet, and this is just the starter stuff, the game world is supposed to get expanded with time. All of the bitching and moaning about the airdrops seems to have subsided, as the devs decided to change up what comes in them, and change some values as far as plane speed, drop radius, and things like that. Honestly I haven’t even used any of the airdrop calls that I have on my account, and I have only seen/heard a couple here and there. It doesn’t seem to be as rampant as people would have thought. Originally I was thinking it was pretty stupid for people to even buy them, because I read somewhere that you can find tickets in the game (so you could get an airdrop without paying for it), and because I was having no trouble finding weapons and supplies. Of course, I haven’t actually found a ticket in-game, so I can’t confirm this. Still, I wasn’t having a problem with surviving. I think people who complained the loudest haven’t even tried the game, and those complaining a little less loudly are the ones who played for a couple of hours and then wrote it off. Get your facts straight, and you’ll see it’s not game-breaking whatsoever.

So I had a fantastic run where I was fully loaded with a sniper rifle, and bunch of supplies, and things were going great. I was running around on my own when I was approached by another player, who asked me via voice chat if I had any food. He pleaded that he was starving and wondered if I could help. I didn’t have my mic set up, so I went ahead and dropped a freshly cooked deer steak on the ground for him. I gestured enough that he figured out I had dropped it, and he thanked me profusely. I went about my business, when a few minutes later I ran into him again. This time he asked if I would mind if he tagged along. I gestured with some hand clapping (is that the appropriate emote?) and he followed along. Soon we came along another player, and they both proceeded to determine that we were all friendlies, but my first buddy told the other guy that I was without a mic. I was getting sick of not being able to communicate, so I decided to start setting up my mic and getting the settings right. As I was doing so, a zombie came along and killed me. Go figure. This is why we need a chat function. Doesn’t need to be global, just in the immediate area, or at least a way to talk to your group of friendlies.

Yesterday I gave the game another whirl, and decided to start on another server. I had been playing on Pandemic, and decided to give Romero a try. Through my travels I figured out more crafting recipes, and also figured out how to fill bottles from a water source and then boil the water over a campfire. Fair warning, fires attract zombies!

I also learned to make a bow and arrows, because apparently there was a bug that has been discovered, that was affecting the amount of loot in the game. They lowered the rate at which your energy (food) and hydration (water) levels decreased, but in the process that patch bugged loot. I was wandering for a long ass time and not finding much of anything. I would have given my left arm for an axe, as it’s so necessary for many of the things you need to do, such as cutting up deer for their meat, and getting scraps of cloth off of zombie corpses. I also found bullets for the first time, but no guns. Apparently the fix for that bug is coming in tonight’s patch. During my run last night, I came across a landfill, and was heading inside to check it out. 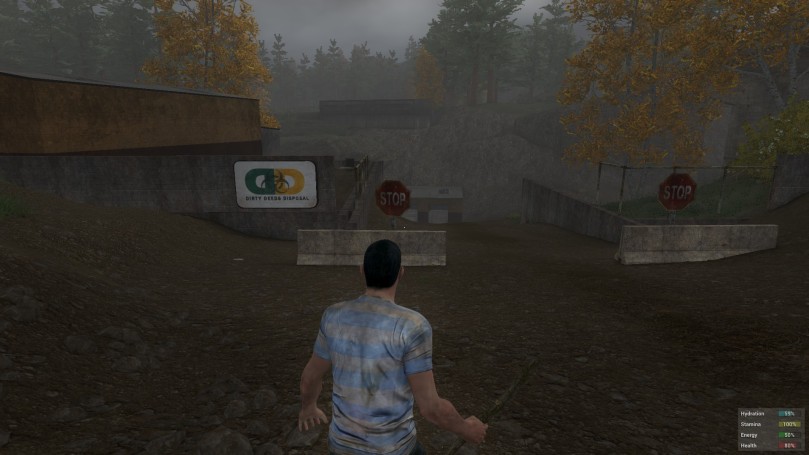 I experience my first real gank inside. I was just shuffling around, never heard or saw anyone, and suddenly I was getting shot with arrows. I dropped like a bad habit. I mumbled “fuck you” into the mic… and my attacker says “I love you too.” Good times. 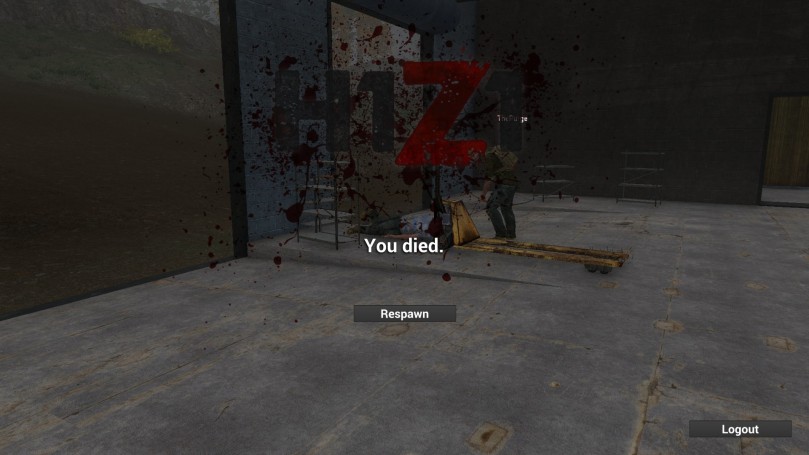 I came across an interesting bug where everything was shifted where it didn’t belong. Items that should have been hanging on walls were floating in mid air. 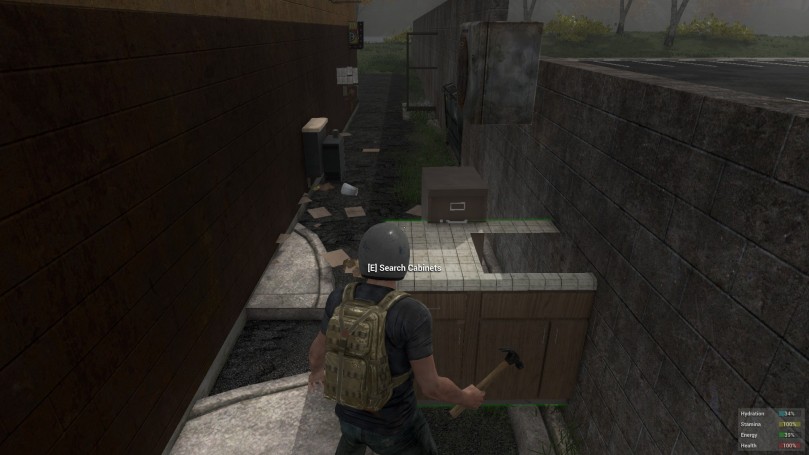 This was during my current life. I am doing fairly well despite the loot bug. I managed to find a couple of weapons/tools, a helmet, and a military backpack that holds more stuff than the usual kind. All I really need is a gun and an axe and I’d be in business. I logged out in a safe place, and when I pick things back up hopefully loot will be a bit more plentiful. I want to learn more recipes and maybe do some ganking of my own. Til next time.