Towards the beginning of this week I spent limited time playing games, mostly just making sure to get a game or two of League in each day, along with touching on a few other titles here and there. Over the weekend I spent some time with friends, and I ended up playing quite a bit of Grand Theft Auto V, a title I previously had no real interest in, but having played it for a while I did have a blast. More on that in a minute. We’ll start with League, as I spent most of my time there.

It’s Lunar Revel time, which is another holiday (I believe it’s Chinese New Year?) that closely follows Snowdown. This of course means a new event page, where you can read up on all the event entails, along with a new featured game mode: Nemesis Draft. There was also a new patch that came through, number 5.3.  You can read the full notes over here, but I’m not going to touch on them myself. I have made more progress in my mission to head up the ranks, and I have finally come back to the place where I started the season. You’ve already heard the story so I won’t repeat it, just know that I’m in Bronze 1 and moving up towards that promo series to get to Silver V. I’m not stopping til I hit Gold. I did try out the new featured game mode, and it was an interesting concept, but I can see where things can get messed up really quick.

My team on the left got to pick the champions for the team on the right, and vice versa. Instead of screwing us over, the opposing team gave us a pretty fairly balance team, and we just went ahead and gave them all tanks with little damage. They probably could have won late game after they got scaled up and used their CC to hold us down, but we ended up destroying them simply by picking a terrible comp for them. I’m surprised they didn’t do the same, but I guess they hoped we would suck with our picks. I’m not the best Twisted Fate, but I held my own:

They surrendered rather quickly. I don’t really think the mode is worth playing instead of ranked though, so I’ve gone back to that. I also dipped into Diablo III again, once again on my hardcore monk. He’s now level 62 and creeping ever so slowly towards 70. The 1st ladder season ended, and so I got items that were in the bank mailed to me, along with all of the gems from the Crusader I had made, so that was some extra coin and resources in my pocket. Now once I get some paragon levels that will benefit said Crusader (who is no longer a seasonal hardcore character) and the Witch Doctor I rolled a while back. Here’s what the Monk looks like after farming a little more new gear:

I’ve still been enjoying my time with H1Z1, but there have been two annoyances that are making me want to wait a little while for a few patches to change things up, or I’m going to have to change servers. As I said last week, you can’t call in Airdrops unless there are enough players on the server. For some reason the server I had been playing on seemed to have airdrops here and there, but suddenly every time I try to call one in there aren’t enough players on. I decided to try to play on a high population server, but I ended up logging in while an air drop was happening. 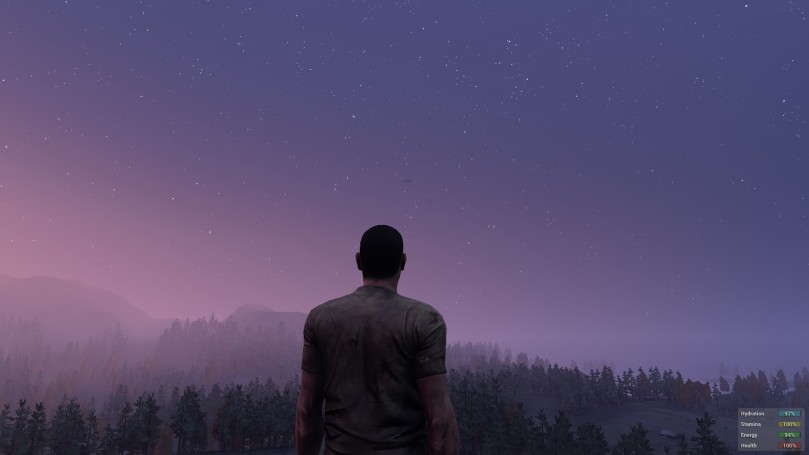 It’s hard to see, but it’s that black smudge in the middle. I ended up falling off a cliff and dying on my way over to it. I didn’t try again, but I know that I would be able to call one in on that server at least. I’m going to try and do that this week so that I can share the experience with you guys. Another issue I’m having is that I watched some videos of the Battle Royale mode, and I really want to try that out but the “play” button and the battle royale servers are all greyed out with it comes to that mode. I’m not sure when it’s going to be live, but I will share that experience once I have it as well. Here’s some more scenic shots for posterity:

So lastly, my old roommate came out to visit this weekend and I spent time with him and our mutual friend whom I described recently. We all hung out and played some video games and the last time, Grand Theft Auto V was on the menu on the PS4. As was a story recently, they added a first person functionality so you can actually play the game in first person mode with makes things a bit different, but like H1Z1, you can swap between 1st and 3rd on a whim. It really is the same type of game GTA has always been, but the PS4 made the game much better looking, and I like some things they did with the controls — driving felt smoother and the combat was easier to get a hang of. I felt like the missions were actually challenging and it was still fun to just run amok on the streets. However, I still don’t enjoy the story lines as much. I think I do like this modern day open-world almost MMO-lite experience, that the two games provide (including PvP aspects), but I think I’d enjoy a different franchise better. Even Saint’s Row got old fast. I think I’m going to give Yakuza 4 a spin and see if it can capture the spirit well enough. Anyway, that’s about all for this week’s edition. Will try to post a little more over the course of the week.