It seems like I just finished up the first couple of episodes of this series, and yet here’s another one already! It feels like they’re getting churned out pretty quickly, but that’s not necessarily a bad thing, as I am always in the mood for some TellTale stories. This new episode, “The Sword in the Darkness” released this past Tuesday, and I managed to fit that in before my sister arrived for a visit. I’m just now writing about it because said visit is over, and now it’s back to business as usual. Shall we get down to my choices?

Episode 3 opens with the player in control of Asher Forrester, who has been found by his uncle Malcolm. Of course Malcolm is there to persuade Asher to return home to help his house in its time of need. Without giving too much away, you’re basically after an army of sellswords to return home with, but are also being pursued by another group. There’s some combat. There’s a dragon. You get to choose between saving your uncle, or your partner-in-crime Beskha. I chose saving Malcolm, but neither died as a result, and it appears to be almost an even split on that choice.

Later, playing as Mira, you are reprimanded by Margaery for having spoken with Tyrion for help for your family (with the Ironwood purchasing). During another scene, Tyrion appears and asks to speak with you, right in front of Margaery. I defied her wishes and spoke with him, and he gave some good news. It’s a tricky game you have to play with Mira, I feel like I need to do whatever it takes to help my family, but I’m not being very careful about it either. Oh well. Another fairly even split on this choice as well.

Britt, one of the men who killed Gared’s family, ends up at Castle Black, where Gared has actually come into his own. Jon Snow seems to have a fondness for him as well. You learn about the North Grove, become a ranger, all sorts of good stuff. However, you have a need for vengeance, and at one point are seemingly alone with Britt, who attacks you. By the end of the fight, he lie at the bottom of the wall, per my decision. It seems that the majority of people were a bit more dastardly.

Playing as Rodrik, there comes a point where Gryff Whitehill, one of the family members stationed within House Forrester’s walls, starts a commotion. Rodrik makes a stand, and I pushed as far as I could before I felt bad for the guy. Rodrik isn’t full strength yet, and really can’t back up his words. Bloodied and in the mud, I submitted to Gryff. For now. I was in the majority this time.

Lastly, back with Mira, Tyrion is framed for the murder of Geoffrey at his and Margaery’s wedding. You’ll recall this event from the television show, I’m sure. As such, he is no longer the Lord of Coin (or whatever that title is) and the Ironwood Decree will be null and void. You still have it, but must choose whether you should keep it and maintain that connection to the kingslayer, or burn it. I chose to burn it, figuring it wouldn’t be of use. Though I know that Tyrion was framed, and I know that he gets out of it in the show, but who knows how long that takes, compared to when this game might end. It appears that the majority of players kept it. I guess we’ll see who’s right later on. 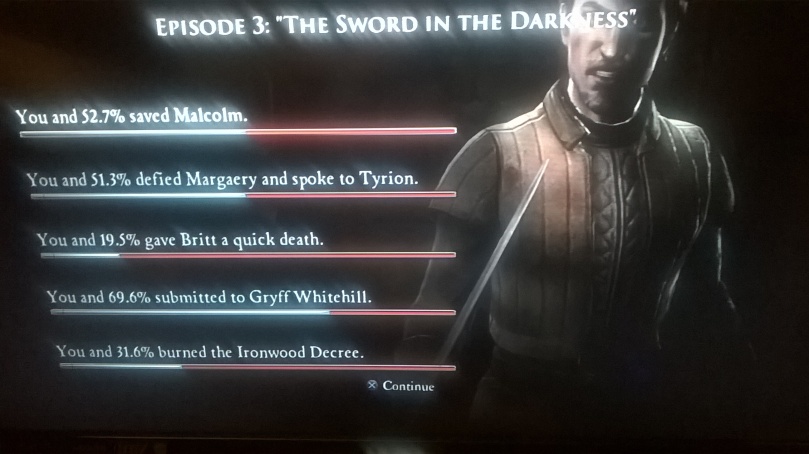 That’s all for this episode. There shouldn’t be anymore episodes for a while, as both series had new releases in the last couple of weeks. So I’ll return to this play through once we get a new episode to play. We’re only halfway through the season, so there should be more cool stuff coming soon.