League of Legends Pro play takes place in the Spring, Summer and Fall each year. It’s no secret that I’ve been a fan of playing League of Legends for years, but I didn’t really start watching the pros play until a couple of years ago, and then it was only the playoff hype that piqued my interest. Since watching that Worlds (Season 3) I have watched nearly all of the LCS games that have been broadcast (and some of the EU and Asian games as well).

I believe it was last year that the Fantasy LCS made its debut, but I didn’t take part either way. Since joining The Obsidian, there have been many attempts for members of the guild to get involved with one another, as our main game, Crowfall, hasn’t been released yet. There was ESO, then SWTOR, some of us made a ranked team in LoL, and many other games have been at least discussed. Aside from a game or two in League, I haven’t participated in anything with the guild just yet, but new opportunities always arise.

Though I watched all of the Spring Split, the MSI invitational, and a couple of other pro events this year, I still didn’t sign up for Fantasy. There were several posts on the official League site about Fantasy and the upcoming Summer Split, and I decided it was time. I’ve been talking about playing Fantasy Football for years (and even helped friends with advice at times) but still haven’t, so I decided I shouldn’t let Fantasy LCS pass me by again. I ran the idea by some of the people in Obsidian, and we created a league. 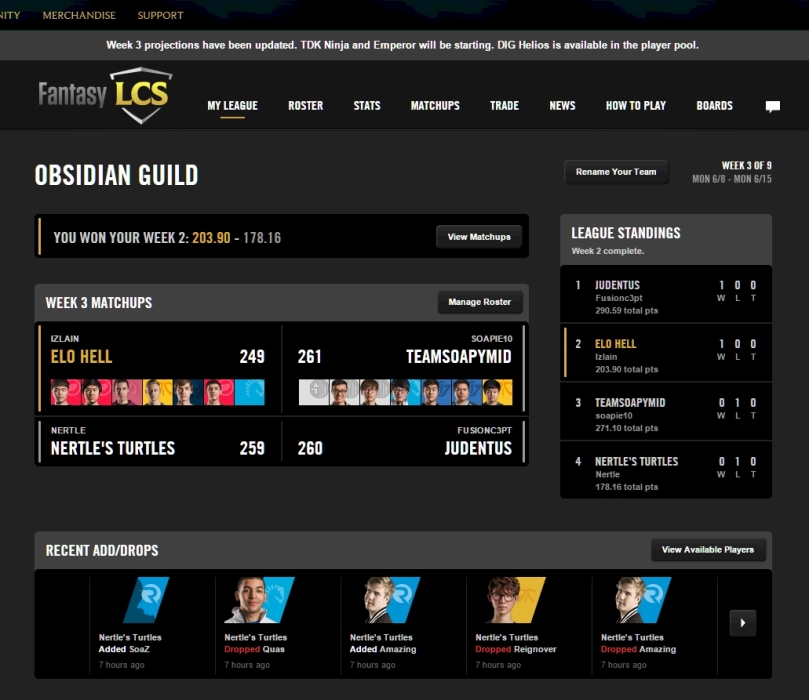 We only had enough people to start a 4-player league, but there were options to have more, so perhaps we’ll attract more people at the next juncture. We couldn’t really settle on a time to have the draft, as people were in differing time zones with differing schedules, so this was understandable. As such we decided to do an auto draft, and after that it was a mad dash to add/drop players from the free agent pool or attempt trades with other teams. My team, “ELO Hell”, was set to face off against Nertle’s Turtles (ran by Nertle, as you might have guessed), and I made a couple of tweaks to the lineup but pretty much rolled the dice with what I had.

The scoring system and the way your slotting and alternates work is pretty much as you would expect and similar to Fantasy Football. The designers did their homework. So of course you have the Top, Jungle, etc, and then a flex pick along with a Team. The team’s score runs off of first bloods and objectives, whereas K/D/A and CS are for the players. There’s more to it but you get the idea. Flex players can be any position, and out of what I had available to me with free agents, I ended up with a pretty good jungler in that slot. I also put in Lemonnation for support thinking he would do me some good, but he was the weakest link. I expected this from a support, as they aren’t the types to get carry points, but still, he’s usually very good and was rather pathetic, but so was Cloud 9 as a whole all weekend, which really screwed over Nertle:

Impact and Rush under performed in one of their games, but still put out better numbers that all of C9, and I only had one player from that team so it didn’t hurt me nearly as much. My flex pick also really out performed his. Either way, I could have never called Cloud 9 playing that poorly, two games in a row, so I think I just go lucky. Still, I’m going into next week with nearly the same team make up:

I swapped out Lemonnation for Bunny FuFuu who had great games during week 2, so I’m expecting at least a few extra points there. I’m slightly worried about Team Liquid this week, as they have some tough games so I dropped IWDominate from the flex slot and threw in Apollo. This is putting most of my eggs in the Team Impulse wagon, but I think they have potential to surprise this week. I also swapped out two of my alternates for players I may potentially use in the future. Xspecial has the potential to play better than Bunny, so I might swap supports again after week 3, and if for some reason Powerofevil or Apollo start slipping, perhaps I’ll utilize Xiaoweixiao. I’m obviously not going to give all of my strategies away here, in case some of the obsidian guys pick up on it 😛

Here’s the other two teams scores from last week: 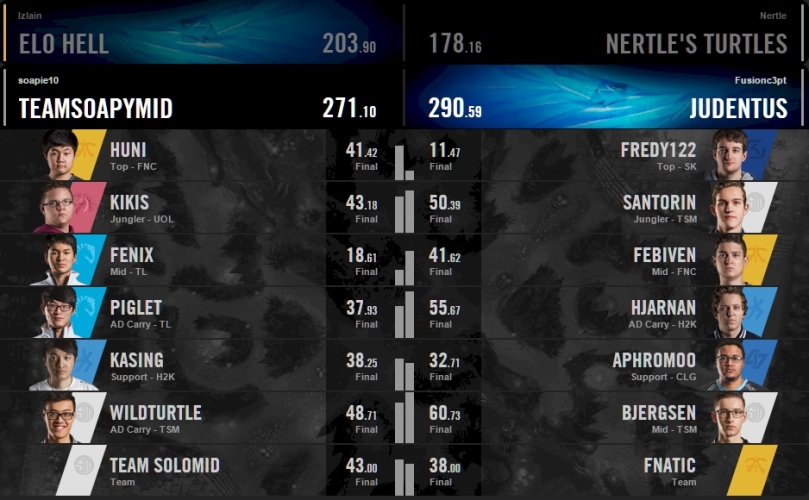 Teamsoapymid and Judentus both outscored me and Nertle, but thankfully I was matched up with Nertle! I’m matched up against Teamsoapymid next week as well, and they have much better players than Nertle’s Turtles did, but there isn’t much of a discrepancy when it comes to estimated points, so it could really go either way.

And here’s the other matchup, and you can see that Nertle revamped his entire team, and is basically Origen altogether. Hard to say if that strategy will play out well, it lives and dies on the backs of a lone team. They are a high placed team in the EU right now, but if they happen to hit a slump he’s screwed. Also, Judentus isn’t exactly lacking when it comes to good players. Bjergsen is a beast by himself.

I’ll be back next week at this time to highlight week 3’s games and take a look at week 4.