I felt my lineup was solid enough, and had only changed out a couple of positions (swapped Lemonnation with BunnyFuFuu on support, and changed my flex pick from a jungler to an ADC) for this past weekend’s matchup. The projected points for my team as opposed to my opponent was favorable, but I was handed an ass kicking anyway. I lost by over 100 points, and that’s just not right! 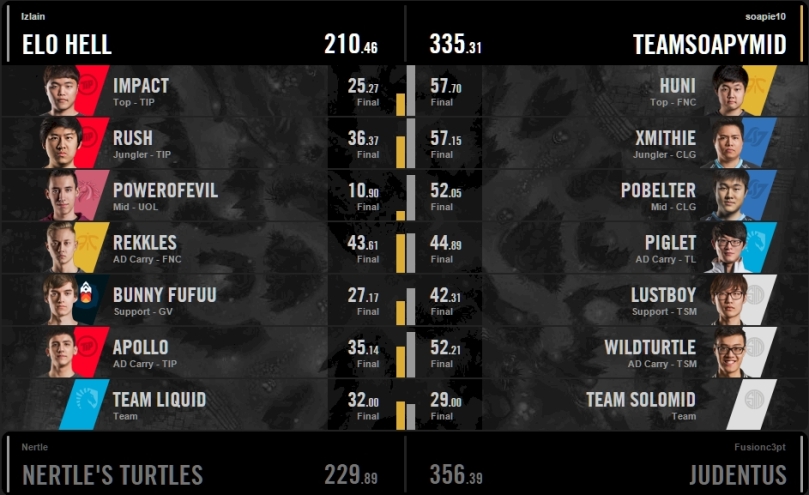 Team Impulse got a win and a loss, and despite Rush and Apollo doing fairly well, all 3 members of that team underperformed for me compared to my matchups. Powerofevil really fucked me despite having a stellar week 2, and only posted 10 points for both games. I didn’t do my research and it turns out they had a rough schedule last weekend, but that’s just unacceptable. Lemonnation made more points than that last year. But you can see what I was going against, pretty much the best players from NA and a beast top lane from EU. I decided that I must have too many eggs in one basket, so I decided to make some line up changes again. More on this in a bit.

The other teams matchups were also lop-sided, and as I said last week, it was probably a bad idea for Nertle to run a comp with only a single team. It appears though, that the highest producing fantasy players are taken up by Judentus and Teamsoapymid, so I think me and Nertle might be in for some hurt for a while. My 1-1 record isn’t terrible, and anything can happen, but if I lose this next game I might lose hope. We’ll see what happens I guess.

I toyed with the idea of dropping Powerofevil altogether, but he has an easy schedule this week and I think he’ll actually produce close to what his projected numbers are. Maybe better, we’ll see. I Dropped Impact despite the fact that he’s a highly rated top laner, only because I think I had too many players from the same team, and he was the weakest link. I went with Hauntzer from Gravity not only because they have done some good things but because I think that he will get me more points than Impact this week. I did however hold on to Impact and Xiaoweixiao in case I need to swap them in later on. My ADCs have been doing good, and provided my mid performs I think that will balance things out. With Team Liquid having a harder schedule I decided to also put in Unicorns of Love as I think I might eek out a few more points with them. Overall, the projected matchup is more solid than it was, but still not quite where I need it to be: 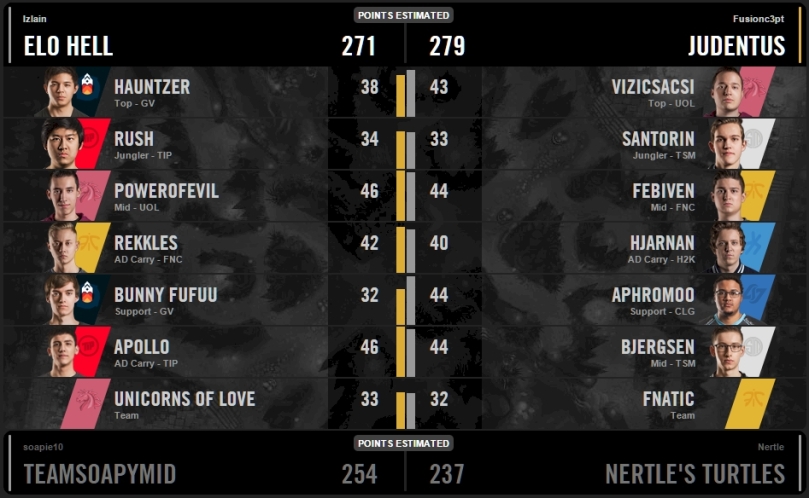 This changed a bit as I took the screen shot before the players were locked, and 1 round of EU games already went down today so I can’t show you what the projections actually were. My 271 stays the same, but Judentus actually picked up Doublelift as ADC, so the projection went up in the 280 range. Still, this is close enough for comfort. However, last week my projections were close to my opponent’s and I got hammered, so it really depends on player performance. I still have faith but really wish I could get some CLG or TSM players on my team. Probably not going to happen. Here’s the other matchups:

Nertle is probably in a bad spot again, as Origen faces Fnatic who has a perfect record in the EU right now. However, they are projecting relatively close, but again, that’s a false sense of security. I’m glad there isn’t any sort of money riding on this because me and him would be losing it. We’ll check back in next week, and see how it all pans out.