The past couple of weeks since I last wrote a SotG post have been all over the place. You might recall a post I wrote about Mobile Gaming experimentation that I’ve been doing, and I’ve continued with that. I’ve been plugging away at League of Legends as well, but unfortunately last night I lost another promotion series to get into Silver. The rage is strong, and though part of me wants to give up altogether, I still love the game and want to play it, so I’ll probably soldier on. I did make a new LoL post recently as well, updating my runes and masteries for the game, which you can check out here. I’ve also mentioned playing some Halo co-op with my buddy, and though that continued early this month, it’s waned as we started playing Resident Evil 5 Gold, which neither of us had done co-op on the Playstation (I played it on my past roommate’s Xbox, and he played it with friends on his). I figure if nothing else, it’s been a long time since I’ve played the game, and I’ll probably net a few trophies I missed in my solo run. I’ve also spent quite a bit of time in Dirty Bomb, after having stirred the interest in the game within my guild Obsidian. Scree and a few other members picked up the game and we’ve had a blast with that, though the last time I played ended in frustration. You just can’t win all the time, and my hyper-competitiveness gets the best of me sometimes. That’s the generalization of the past few weeks, but there’s more to it than just that, so let’s dive on in.

It’s rare that I see titles I’m interested in during the week-long deals on Steam (the ones that post on Mondays and are usually just a bunch of crap games that are discounted) but this week I managed to find a couple of gems. I wasn’t sure if they would be gems, but for a total of $0.88 I wasn’t taking much of a risk. I’ve always enjoyed shoot em ups since my Nintendo/Arcade days, and new ones are popping up all the time on Steam. Revolution Ace was on sale for a whopping $0.19 cents, and with my surplus of card sale money on my account, I picked it up. It’s unusual in that it has some RPG elements that most games of this ilk do not. Otherwise, it’s still regular ol’ shooting action. There’s different weapon slots you’ll open over time, advanced shields, and you get to pick and choose what air-to-air, air-to-ground, and super weapons you have equipped. As you go up in level, you’ll open more equipment along with perks, so each playthrough is theoretically different. There are other game modes as well, including hi-score competitions, but overall it’s a fun little time waster. 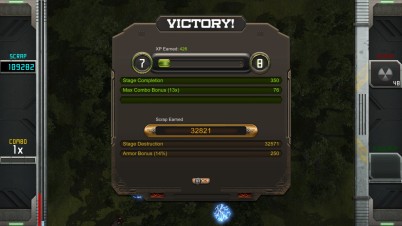 The other game I picked up is called Reprisal Universe, and it’s the closest thing to Populous I’ve seen in years. I played the original Populous on my Dad’s Atari ST back when I was a kid, and this game is so reminiscent of that it’s not funny. The graphics are slightly better, but still done in a retro fashion for nostalgic value. It’s is exactly what you would expect from a God game, where you can control the formation of the ground, pick up totems, command units and complete objectives. You eventually also get the power to cause disasters, which can be used to target an enemy force, but then becomes uncontrollable and can actually harm your own people. So far I’ve just played through a few levels of the game, which serve as a tutorial but still give you the general idea of the game. I look forward to more chaos in future play. 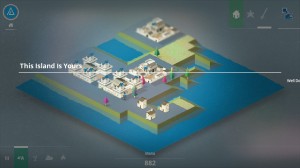 On the mobile front, I downloaded some games on my phone and also via the windows store. I’m not going to go as in depth with this as I did in that mobile mini review post, but here’s some general commentary:

Pinball FX2: (Windows 8.1) A pretty standard pinball game. Gorgeous and runs well. However, you only have access to a couple of tables and the rest are stuck behind paywalls. It also feels like a rip off of Zen Pinball, as they both share Marvel and Star Wars tables that look to be the same. Perhaps the same company made both, which would make sense, but I’m too lazy to confirm.

AE Basketball: (Windows Phone) Much like the games you’d see at Chuck E. Cheese or Dave and Buster’s, where you’d actually throw basketballs through a real hoop, in time-attack fashion. This way is a bit easier, only requiring finger swipes, but same concept. Ad-heavy, but semi-fun.

Reaper: (Windows 8.1) Lighthearted side-scrolling RPG. Free version only allows you to play to level ten though, so you’re basically forced into buying the game if you want the full experience.

Trolls vs. Vikings: (Windows 8.1) A Plants vs. Zombies clone, with some differing mechanics, still fun. Social networking and RMT stuff abound though. Appears like you can play through the whole game without spending money though, it just might take a while longer.

Dragon Mania Legends: (Windows 8.1) I actually didn’t mean to download this game, but was a little click happy and did anyway. Was semi-pleasantly surprised though. It’s a lighthearted city builder type sim with some turn based combat reminiscent of costume quest (active timing to hit). A bunch of time gating and social network/RMT stuff, as seems to be the case with all of these types of games.

Lastly, on the MMO front, I haven’t been playing much, but I haven’t given up on them either. I did manage to play some EQ2 the other night and I finished off all of the quests from The Withered Lands. This means I can go to SkyShrine to do a few other quests, and then move into an expansion that I have yet to see. This is exciting and I want to put more time into this.

I also downloaded Skyforge, which just went into Open Beta. It wasn’t a game that was on my radar whatsoever, but members of my guild and a bunch of people on Twitter had been talking about it, and I wanted to see it for myself. It’s an interesting concept, in that it mixes Sci-Fi and Fantasy fairly well, but the story line is pretty confusing (or lacking) at the beginning of the game. It’s also not clear that despite there being something like 16 classes, only three are available to begin with and you have to unlock the others in various ways. Admittedly, I’m not very far past the tutorial stuff, but I can report that the game is beautiful, and I really enjoyed the action combat. I had to do some research to come up with answers to many of my questions though, and that’s not a good thing when it comes to MMOs, as most provide this type of information right out the gate. It is Beta though, so perhaps parts will be fixed up later on. I’m intrigued enough to follow along, but as it is I have EQ2, ESOTU, H1Z1, GW2, and SWTOR on my hard drive, besides all the other games, so finding time for another MMO is probably not going to happen as I barely play the ones I have installed. Still, I’ll keep up with it to see what happens.

That’s it for this edition. I’m out.