Another week down, and the streak continues! After what was looking to be a disappointing season, starting off 1-2, my team has gone on a hot streak, winning four games in a row. I am now fully in control of my own destiny, as a win will keep me in first place across the board. Other scenarios include losing, which puts me into a tie with Teamsoapymid once again, and then it will come down to point totals. I currently lead her, but Judentus still has more total points than I do, so that makes things more complicated were I to lose and he ends up winning.  That would put three of us in a tie for first, and he’d probably take it with more points at that time. So I just need to win this week and keep the dream alive! We shall see how it goes, but first, let’s look at what happened last week: 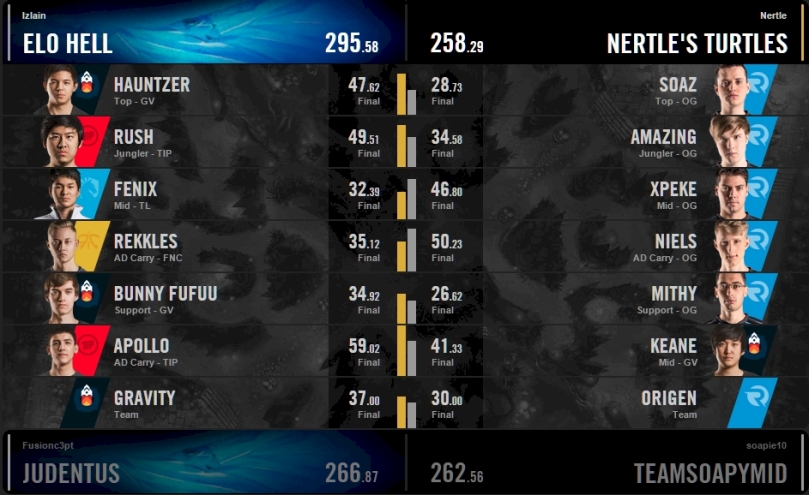 In week 8, I had solid performances from most of my players, though Fenix and Rekkles didn’t put up the numbers they have for me in the past. Everyone else did well for their rolls, and I ended up eking out a win. It wasn’t looking pretty for a little while there, but at least in the end I prevailed. Looking forward to this weekend, there were some tough decisions to be made.

It didn’t come down so much to the lane matchups of my team versus their team, but more who my team members were playing against more specifically. On the surface, you can see that my projected points are lower than theirs (though it did fluctuate a bit beyond when I got this screenshot), and you’ll see I had swapped out BunnyFuuFu for Lustboy because he was projecting higher. I don’t solely rely on projections though, because doing a little bit of research, I found that nine times out of ten players like Rush and Apollo will project ~30 points and then end up posting 60+. Let’s look at my roster going into the match:

So yes, I did swap Lustboy in, though I also made another change at the last minute, so I preemptively screwed up these screen shots, but let me explain. I put Xiaoweixiao in for Fenix as well, because not only was he projecting higher, but as of late, Gravity and Team Impulse have been giving me more points than Team Liquid (and seemingly performing better on the Rift IRL as well). I put all of my eggs into the Gravity and TiP baskets, minus Rekkles and Lustboy of course, because I wanted a little diversity and they have both done well for me in the past. There are some tough matchups though, with Gravity and TiP playing each other, but then playing a weaker team afterwards (Gravity faces TDK and Impulse is playing Liquid). The TiP vs TL game was the kicker, as I feel like TiP will outperform and outplay TL, so I didn’t want another awkward lane in this roster for the week by leaving Fenix in. Either way, win or lose, I feel like GV vs TiP we’ll see points spreading both ways. It’s a gamble, but I’ve been doing that the whole time, and it hasn’t always paid off. Still, going with my gut this time around.

Let’s take a look at the leaders of the pack for week 8 and the summer now, just for posterity:

It’s surprising to see two members of Team 8 as top scorers for the week, but they did have pretty convincing performances last weekend. It seems like after making some substitutions they’re finally starting to gel, albeit a little too late. I believe it was said they *could* make playoffs, but I think it was more like they were just going to avoid auto-relegation. Also odd that a Cloud 9 player was present, but they did have a good couple of games as well. Apollo made another appearance on the list, and is also one of the top summer players, along with Rekkles, who has been there for a while. Both of my ADCs I’ve owned since day one have been solid contributors.

That’s it for this week. We’ll see how the final week of the season went, next Thursday.