Those of you who have followed this blog for a decent amount of time will know that I frequently play and write about League of Legends. It’s my “evergreen” game, as Void likes to put it. I’ve played casually, fervently, and taken breaks. It’s something that I don’t know if I’ll ever be able to quit though, despite really wanting to at times. Either way, in my history with the game, I’ve managed to get out of Bronze one time before, and now I’ve done it again.

I started playing the game during the first season, but it was nearing its end. I was still playing bot matches and normals at that point in time, so ranked was far from my mind. In season two I still hadn’t mustered the courage to play ranked, as I felt I wasn’t good enough to compete. It wasn’t until season three that I decided to give it a try. It turns out that I had better luck with matchmaking back then, because it only took me 73 games to reach Silver V, and I recall it being fairly quick. I wrote up a piece on my promotion to Silver which you can read right here. Back then I was mostly supporting, while playing top a little as well. During season four I had aspirations to try and reach Gold, but I ended up not playing any ranked at all, though I know I probably took about six months off from the game so that’s a big part of it. This season, I was gung-ho to get back into ranked play, and it took me until last night to finally get out of Bronze. There’s still time; I could theoretically get to Gold before the season’s end, but it would take some dedication and some luck, and I’m not sure if I’ll make it or not. Had I made Silver sooner, I might have pushed harder, but at this point I think I’m going to go back to playing here and there. There’s always next season. 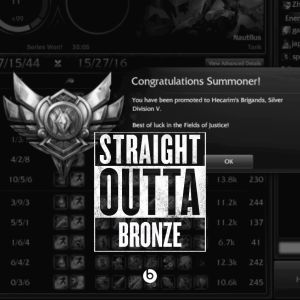 I’m sure most of you have seen these pictures going around on social media sites. It’s a promo for the movie Straight Outta Compton which is the story of NWA, that hits theaters this Friday. There’s an image maker on the official site, and I found this to be a perfect opportunity to use it to create this image. Yeah, I’m straight outta bronze. Catchy, no? Unfortunately, I didn’t go so far as to screen shot all of the matches leading up to my promotion, mainly because I was in the promotion series to get into Silver about six or seven times before I finally made it. It never failed, I managed to get trolls or rage-quitters every time I was in a series. I lost most 2/3 (in a best of five) but lost one of those 1/3. In the final series, I ended up winning two, losing one, and winning another to go 3/1 overall. During the loss, there was (you guessed it) one of those rage-y types who declared the game would be over during champion select, and he ended up being the worst player on the team, go figure. We still held on for a while but it was too far gone by that time. Similarly to my season three performance, I ended up winning the whole series while playing support, though I feel that my contributions were note-worthy. I ended up being the shotcaller, and our rotations ended up being superior to our opponents. In the final game, there was a mutual desire to win, because every last one of us needed that win to promote into Silver, and we ended up getting our wish. I honored them all, and added them all as friends. It was truly one of the best experiences I’ve had in the game, considering the toxic nature of League. 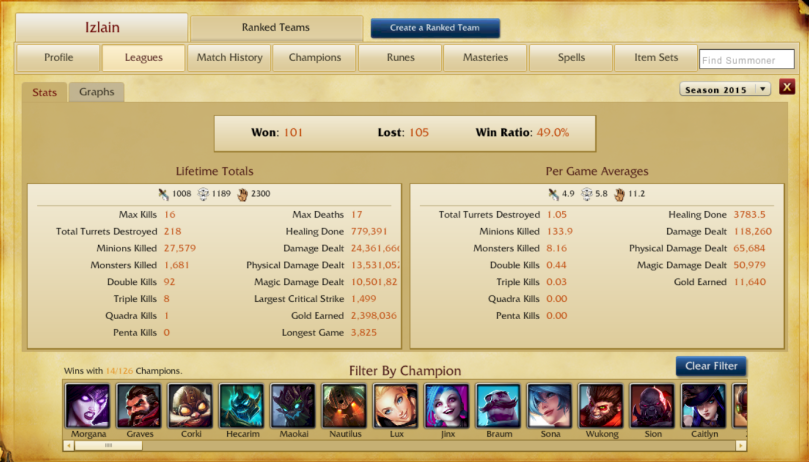 Stats wise I’ve been doing alright, though I don’t like that win ratio. My personal performance overall seems pretty good, though I know it’s a team game and that’s why my win ratio doesn’t reflect that. It took me a hell of a lot more games to reach silver during this season though, 206 as opposed to the 73 I mentioned earlier. I spent most of my time playing Top, Support and ADC, but had a few games in the Jungle and Mid. The former have become my preferred roles. For stats people, and posterity, here’s a break down of the major points of my played champions:

Except for the few at the bottom, I’ve maintained at least a 2.0 KDA across the board, and that feels pretty good. How have you fared this season?

Also, taking a page out of Murf’s book, for the remainder of August I’m going to try and put up a video of a Daily run in Nuclear Throne. A rogue-like with procedurally generated levels, the Daily run is a set build that changes each day, and anyone playing the game gets one chance to see how well they do. It’s been implemented in the game for a while now, but I liked Murf’s idea where he’s been doing a run a day in Binding of Issac, and this game is already setup to do exactly what I want. I’m not imposing any other rules, though I might start to do that later on. As it is I’ve never completed a run so I doubt I’ll have to make it harder on myself! Here’s today’s run: