It’s been about a week since I last made an update to my ongoing Gamer To-Do List project, so I thought I’d come back to it for another Blaugust post. There haven’t been a huge amount of updates here, but I’ll try to touch on the major stuff and add some notes to the list so it reflects the current goings-on.

The biggest bits of news I have from the past week is that I’ve made some forward progress playing through the Chains of Eternity expansion in Everquest II, along with making some headway in Diablo III on my Demon Hunter, who is a leftover from a past season but hadn’t been leveled to 70. I did however spend quite a bit of time playing other things that aren’t really on this list (nor would I include them) and being busy with real life stuff, so that factors into why I’ve had little effect on my list.

For starters, I spent a few hours playing Grand Theft Auto V at my friend’s house the other day, and I have to say I really want to pick up a PC copy because it’s honestly the best GTA experience I’ve had, especially after having basically written off the series for a very long time. I also got to try out the Call of Duty Black Ops III multiplayer beta, as he got into it on his PS4. Unfortunately this didn’t include access to Zombies or the campaign co-op, only the regular multiplayer. It was hard to get matched into anything decent, there was a bit of lag most of the time, and so it wasn’t the best experience but I can report that multiplayer in that game is pretty much the same thing you’ve already experienced, with a couple of differences. First, there’s the parkour elements that Titanfall was known for, being able to rocket jump and wall run/hang. Second, there’s a new mechanic called “specialists” which equate to different classes that have special abilities. You can only use one specialist at a time, and they are gender locked pre-made characters. This is a step towards making CoD have a class system like games such as Battleborn and Overwatch are trying to do. I like it, and I think it holds up pretty well. The multiplayer isn’t optimized yet though, so it wasn’t all that much fun. I look forward to playing more of this when it comes out though, as the 4 player co-op campaign and zombies should be a blast.

On the Everquest II front, I finally completed the Eidolon Jungle zone. The beginning of the zone was kind of a drag, because it was just a rip in the time continuum, and a mirrored version of the Feerrott, a zone I was never fond of from the original Shattered Lands. However, as the zone progressed it was cool to see atmospheric events that made parts of the main landmass feel like whole different zones.  Towards the end you’re in an area that has been fully engulfed by creatures from the plane of fear, and you are doing quests for the weird Amygdalan race. It’s still more kill some of this and gather some of that, until finally a couple of quests point you in the direction of an instanced zone: Temple of the Faceless. I was worried I would be stuck at this point, assuming that the dungeon would be heroic and I’d be unable to complete it, but I had forgotten that at the end of the last zone I had completed (Skyshrine), Daybreak has started creating solo zones so people could get through these situations on their own. Thankfully the mobs in the advanced solo were easy to kill, and counted for what I needed. One of those quests’ completion relied on clearing the zone, and I was able to do so without any missteps. The next set of quests sent me to another advanced solo, called the Throne of Fear, and it too was easy to complete. Soon I had finished the instances and the zone altogether, and am now sitting on the quest Shades of Drinal: Puzzle Pieces which is supposed to lead me around Norrath to newly (at the time) added solo instances in older zones. This is part of the quest chain that will lead me to the other overland zone for the expansion, Obol Plains. So I think at this point I’m about half way done with the expansion, but not counting heroic dungeons or raids, which I might not get a chance to do until later, or with help from others. For now I’m content to solo up through the content til I can’t anymore and have to buy the new expansion + sub time. Here’s a gallery of various shots from my recent adventures:

In Diablo III, I mentioned previously that I want to check out the new content in patch 2.3, but also that I wanted to start up a new character when season 4 started. As I already have a hardcore Monk and Witch Doctor at 70, I want to start either a new Wizard, Crusader or Barbarian, though the latter is fairly uninteresting to me. I didn’t mention Demon Hunter there, as I already have a hardcore DH from a previous season that was sitting at level 40 for the past while and so I thought I’d play him for a while til the patch releases, or maybe even getting him capped before hand. Since making that decision, I’ve only had a couple of playing sessions but have managed to level him to 51 at the time of this writing. I’m still playing on Expert for now, and have twinked him a bit when it comes to gems that a character his level wouldn’t normally have access to. Creatures in the Nephalim rifts are dying pretty easily, so it may be time for me to start thinking about heading into Master difficulty. I won’t bother moving into Torment I before hitting 70 and having mostly legendaries or set gear though, as I have learned that lesson the hard way. Bumping up the difficulty too far just results in dead characters in Hardcore mode. The Demon Hunter is starting to become more interesting now that I’m nearing the level cap, as some of the runes drastically change his abilities and make them more fun. I have to say at the early levels he’s less interesting than the other ranged characters, the Wizard and the Witch Doctor. I really miss playing my Wizard, but as he isn’t a Hardcore character, and I’ve basically said “to hell with normal,” he just collects dust. This is why I’m thinking of rolling another new Wizard come season 4. But I digress. Here’s what the Demon Hunter looks like after doing up some dyes and transmogs: 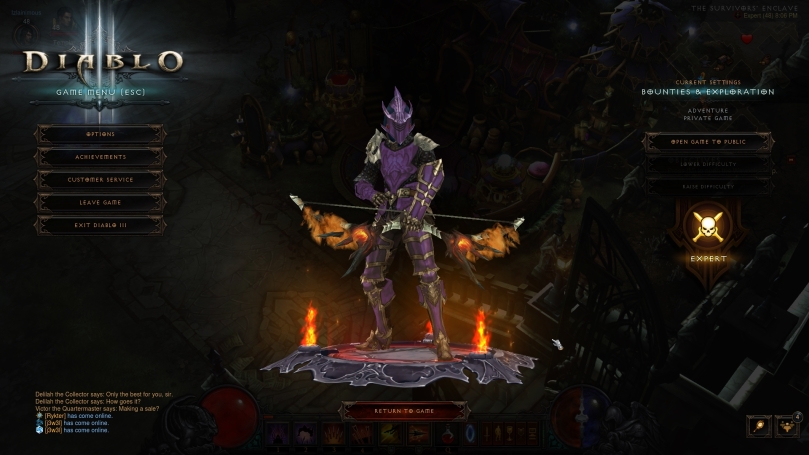 That’s really all I have to report this time around.

By far my best daily run so far, partly due to the fact that Chicken is so hard to kill (also this means the video is considerably longer than usual). Made it to world 7, just shy of the throne this time. Progress! Don’t mind the tutorial bit, that was just something added in the latest patch and had to be played through.