Back in Norrath, I had just completed the Eidolon Jungle zone and was excited to see what new things were in store for me next. First things first, I was sent to the Eastern Wastes back on Velious, where I was to meet with a contact who would tell me what steps to take.

The dragon I met with sent me inside the Sleeper’s Tomb, which up to this point was a zone I hadn’t been in before. I believe this was part of the original content in DoV, but there was now an Advanced Solo option at the entrance, so I headed inside. The dungeon consisted of killing a couple of named mobs and gathering a couple of statues. Killing those named would open a barrier to another named, and in that room there was a map that I also needed to pick up. Each of these bosses had some weird scripting and annoyances to them, but I ended up clearing it with only one death, which was par for the course.

With that instance cleared and the items collected, it was back to my buddy the Duality, back in the Feerrott. We bro fist it out and then he sends me to Jarsath Wastes in Kunark land to find another friend of his, who’s hanging out on a boat by the docks. I go say what’s up to his friend who then sends me up to a dungeon on a cliffside, and honestly I think this is some new stuff added for this particular expansion, because not only were their new mobs I haven’t seen before inside (the Ashlok — kind of a big Ratonga, which made me feel sorta bad for killing my own people), and the graphics appeared newer, despite the fact that I know they’re still in the same old engine. So the first instance I was sent into was basically a big city of these rat folk, build up onto the side of cliffs so there were some precarious areas, and some of the baddies had some knockups that could have been annoying but I made it through in one piece. Had to collect a couple things in the first instance, just to go back to the guy on the boat and then head into another instance that was a bit different but basically the same. Either way I enjoyed both runs and there were some cool sights to be seen. Very little in the way of gear drops though, so that was a little disappointing. 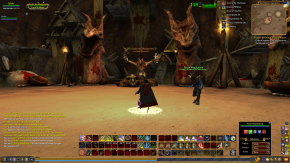 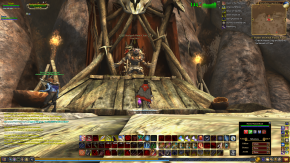 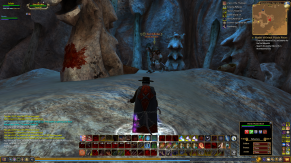 From there, it was back to the guy on the boat, who is sending me now into Chelsith: The Ancient Vault, which is still found underwater, though it shares the same cliff the previous dungeons did, whereas the original Chelsith was back the other direction. This is where I left off during the last play session, but according to the wiki I’m not far off from entering the next new overland zone, Obol Plains. I’m interested to find out what it looks like! Soon.

Made today’s run with Chicken. Things were going fine til I got to Lil Hunter, and didn’t get a lucky medpack drop (for Chicken’s passive).