I’m not sure who started this up as a writing prompt, but I know earlier in the month I saw quite a few people write about their personal gaming spaces, and thought I’d use this to get through the tail end of the month. So here’s what my desk area looks like: 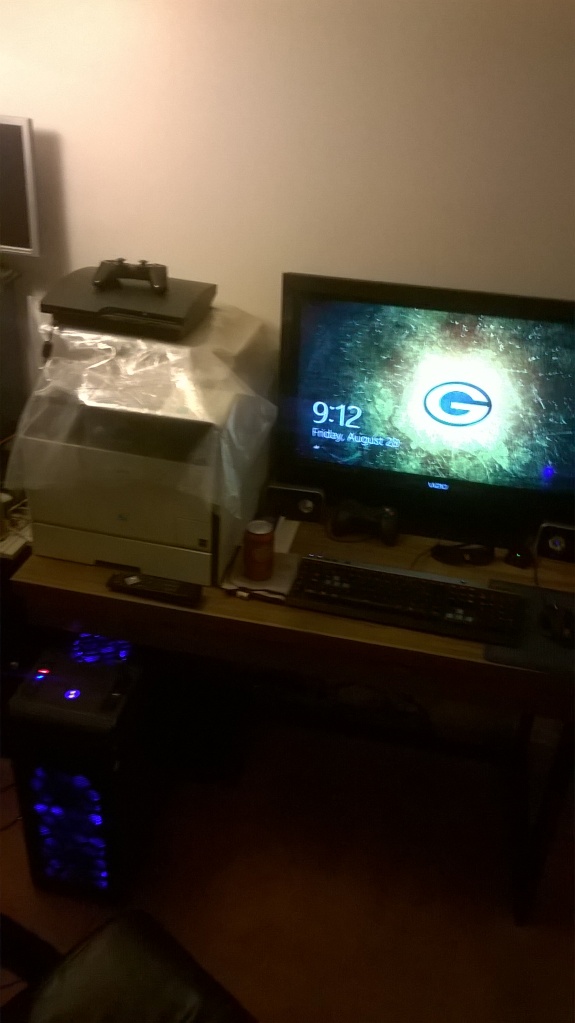 In this picture you’ll see:

A couple of decent upgrades happened between my initial build and now.  I ended up taking out one of the 500 GB hard drives and replacing it with a 2 TB. The video card was also upgraded a bit from the 750ti to the 770 GTX, which gave a noticeable performance boost. I will probably upgrade this again in the future, especially if I get a new display. I wouldn’t mind trying 2k resolutions. I do enjoy having the ability to swap between my console and computer on the fly, but I really want to get a second monitor for a number of applications, and intend to get on that sometime in the near future.

So there you have it, my humble setup.

There’s no daily run today, as I went on a trip out of town for the weekend to see family. My sister is moving out of state and I wanted to see her one last time before that happened. I have scheduled this post and the last of the month ahead of time, and there’s no way to do that for those dailies. I had originally planned to only do them for the entirety of Blaugust, but I think I might try and keep it going into the future. I like doing it, and so I’m going to continue as long as that stays the case. Expect a new run on Tuesday most likely.

2 thoughts on “My Gaming Space”