It’s been a while since I’ve talked about League of Legends. This is partly due in part to the fact that the season is coming to a close and I haven’t wanted to risk dropping ranks playing competitively. I have been playing the odd ARAM here and there just to earn the daily IP bonus to collect the 26 champions I don’t own yet. I have however been keeping up on the comings and goings with the the 2015 World Championship, and am doing so for my 3rd year in a row now (prior to that I was playing the game but not paying attention to the pro scene). I’m sure regular readers will know that my involvement with the pro scene has increased this year: I played Fantasy LCS over the summer, and have made further commentary about the North American playoffs. Those are the people who would have seen this coming. I had initially intended on writing about the subject after the first weekend of play had completed, but I neglected to do so and now am rectifying that by writing about the entirety of the group stage.

Last month there was a brief stream from Riot Games where they had the “group draw” show, where some pro players who weren’t participating in the tournament (already eliminated) chose the groups for the group stage randomly by pulling balls with team names inside of them from various bowls. There were stipulations where there couldn’t be two groups from the same region or same pool in a group. This meant that each of the NA teams would be in different groups, so on and so forth. After the group draw, there was plenty of speculation as to which groups had clear victors and clear losers. There was also a new feature on the Worlds site, where registered players of the game could take part in a “Pick Em” for the groups stage effectively giving you a shot at some in-game goodies. For simple participation you got a summoner icon, earning a certain point total would give another icon, and getting it 100% correct would net a skin. I said “why not?” and made my picks. I only got one group right, and portions of others right, but I might redeem myself in the knockout stage, which is currently open for picks. I’m about 12 points off from getting the other summoner icon, but that skin is already beyond me. 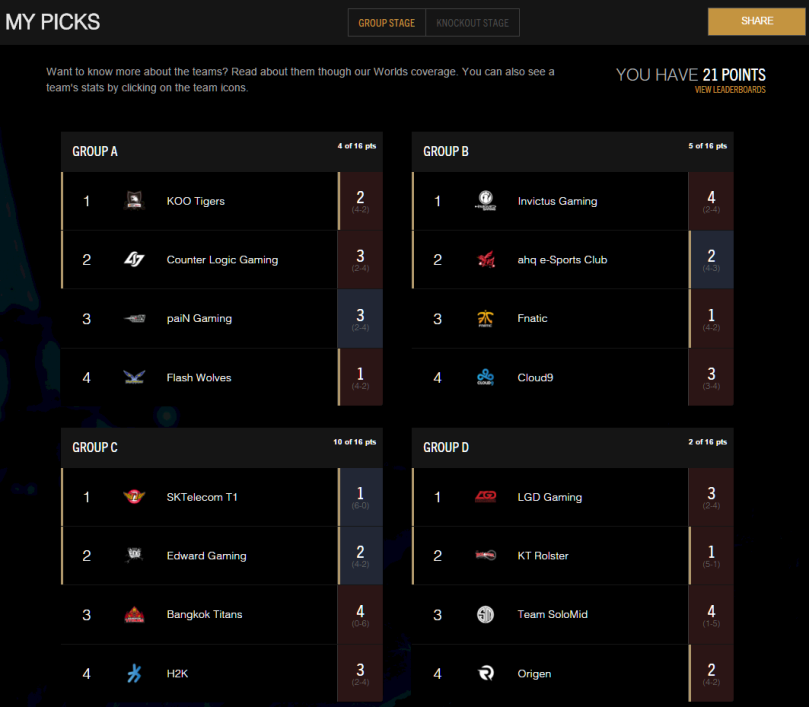 SKT and Edward Gaming were clearly the best teams in their groups, and SKT is making a strong argument for being the best team in the world, for the second time in three years. I’m from NA, my favorite team (Team Impulse) didn’t make Worlds, but I still wanted to back my region. After the first week of gameplay, each team playing the other teams in their group one time, there were some surprising results: NA teams were doing pretty well, and some of the EU teams were surprising as well. I don’t know as much about the other regions, but from reading about them they mostly performed to expectations. CLG and Cloud 9 were sitting at the top of their groups. TSM was 1-2, which was disappointing, but seemed to be synonymous with their faltering during the summer. Origen came out on top of their group while LGD who was the #1 seed from China had fallen in all of their games. Some surprises indeed.

This past weekend, the structure was changed up a bit. Each day, only one group played, and played each of the other teams one more time. This means that each team in each group had played the other teams twice each. This meant that each day we would see the final seeding and see who was going to advance. Only the top two teams from each group would move forward. Despite the fast start, CLG and Cloud 9 both were eliminated. TSM didn’t win again. Fnatic pulled their act together and took the top spot in their group. There were a ton of ups and downs and excitement, and if you missed any of the games you can check them out in VOD form over here. 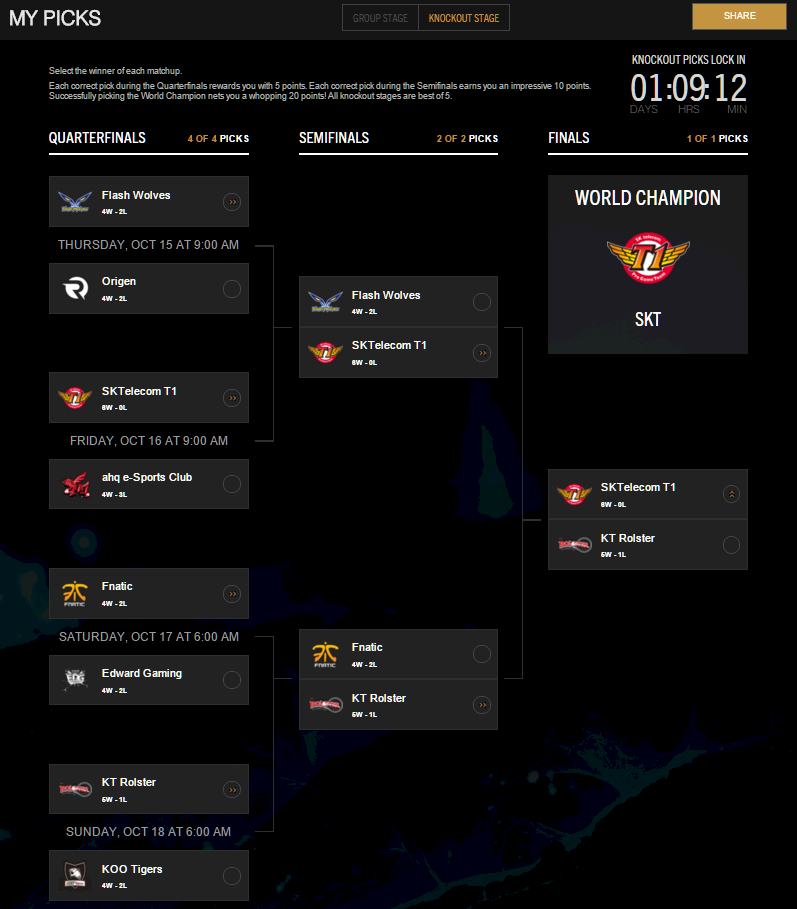 Coming up starting this Thursday is the knockout stage. The winners of the group stage will vie off to determine further stages culminating with the finals and an eventual winner. Despite the fact that I wanted to see an NA team make it further along this year, that didn’t happen. I have defaulted to rooting for the EU region, which has both Fnatic and Origen still plugging away. However, I have to be realistic, and I see the Korean teams playing at a higher level. I think the Chinese have shown some weakness, and foresee the Taiwan teams along with the Koreans advancing, with a final between SKT and KT Rolster. But honestly, I don’t think anyone really knows who will make it though, given all of the surprises from the group stages. I’m just glad that NA had a decent showing for once.

So there you have it. I’ll be back later on, as this first weekend will only be the games in the left column, and I’m sure I’ll have further thoughts on those. Til then.