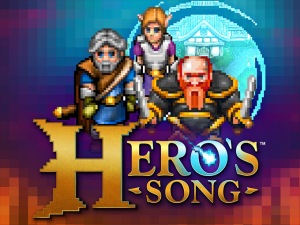 Hero’s Song is the new game in development from the studio created by ex-SOE/Daybreak CEO John Smedley: Pixelmage Games. Most of you probably know about the history of Smed and his dealings throughout the years, but it’s still something of a new topic so it was a fitting time to jot down some of my thoughts.

Flash back to a year ago, and Smed was still the CEO of Daybreak Games, which had recently been rebranded after being dumped by Sony and purchased by an investment firm. Their new title H1Z1 was entering Early Access, and I was an early supporter. It seemed like an MMO I could get behind, with a focus on PvP and survival. It turns out it wasn’t much of an MMO and more of a survival sandbox, and it hasn’t really turned into an MMO at this point either. I’m not disappointed by this fact, but I haven’t really played it much since the early days and even then I spent more time with the Battle Royale mode than anything else. My policy with Early Access titles is to check them out periodically to make sure they are still steadily developing, but with server wipes I don’t see much of a point in really investing the time until the game is done (or the wipes cease).

Later in the year Smed parted ways with DBG after a very public meltdown. It’s not so much that he came across as a shithead on social media, because I can totally relate to his reasoning for his outburst, but as the head of a company, unless you own it outright, you’re not going to get away with that behavior. He was cavalier about his parting ways, and I’m sure Daybreak will be fine without him (H1Z1 development seems to be trudging along, and EQ/EQII have seen some mild success with progression servers). It wasn’t too long before he announced that he had started a new studio, and that they were working on something new.

Soon, there was a Kickstarter announced for the game in question, Hero’s Song. When I first learned of the game, I took a look and was instantly interested. Naysayers were skeptical, and anti-Smed folks surely boycotted any second thought. I saw discussions on how “crappy” graphics were a turn off. No one seemed to understand the scope of the game either, but that’s partly due to the fact that not all of the information one would desire was entirely clear based on what we knew so far. This seems typical of a Kickstarter campaign, as I don’t remember knowing a whole lot about Crowfall before I backed it, but was sold on the “dying worlds” and PvP focus. I saw enough from the campaign to know that I was interested though, and I had been planning on backing it sometime before the 30 days was up. I happen to like pixel art. I love isometric action RPGs. Adding some sandbox and MMO elements would surely sweeten the pot.

In its first week, the Hero’s Song campaign raised $136,849. That’s pretty decent for a week’s worth of funding, considering there was no marketing cycle to hype the game before the campaign started (which was probably the biggest mistake made by Pixelmage). However, the company was asking for $800,000 and it was already starting to look like it wasn’t going to happen. At least, the company itself thought so:

After looking at our funding levels and the reality that we aren’t going to reach our funding goals, we’ve decided that the best thing to do is to end the Kickstarter. We sincerely appreciate all of the support we got from the backers and the Kickstarter community. This was our first Kickstarter and we made mistakes along the way. I want to acknowledge that right up front. We put a lot of time and effort into the Kickstarter, but it’s obvious missing things like physical goods hampered our efforts. It’s also fair to say because we’re early that we didn’t have enough gameplay to show the game off enough to get people over the hump.

It does appear that independent investments got them to where they want to be though, so it doesn’t really matter that the Kickstarter campaign was cancelled. They had already said that they had $1 million at their disposal before the Kickstarter went live, and estimated the 800k to be enough to finish up the game. They also had said the game would be released late this year, and though it sounded like a possibility, it was likely that goal wouldn’t be met since the likelihood is that development only started very recently. If you’re churning out a game that sounds like it is going to be this in depth in under a year, it’s probably going to be shovelware.

Wilhelm has a great break down of the reasoning behind why the Kickstarter failed and the shortcomings of their decisions leading up to it and during the process. He goes into a lot more depth than I did, but I definitely agree with much of his assessment. Syncaine just laughs at Smed doing Smed things, and as predictable as that is, I still don’t sit on the anti-Smed side of the fence. I agree with Wilhelm in that he would be a cool guy to drink a beer with and talk about games. I share Syp’s love of pixel art, and too hope that the game sees the light of day so I can try it out, because it still has piqued my interest. Good luck Pixelmage. Give us something worth playing.