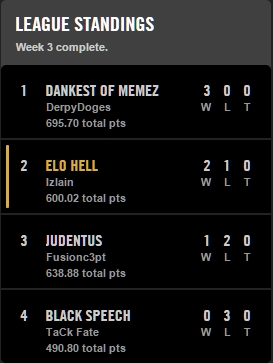 There’s been a recurring issue during the Spring Split that doesn’t necessarily affect its watch-ability, but definitely affects Fantasy leagues. In the first week, I had a player that wasn’t yet able to play for some reason, so I had to substitute in a different top laner. The player I benched ended up netting more points in one game than the other did in two. The second week, that same player and their team were on my starting roster, and they ended up getting a win-by-default because the team they were facing on Saturday were disqualified for the day. Even this past week, I had to make some concessions because a player that I swapped into my roster’s flex spot ended up not playing so I had to throw someone else in there last minute, and though they didn’t get me a bunch of points, I still managed to get a win. This isn’t even touching on the fact that teams like Liquid have a sort of revolving roster (though it has solidified after week one) and teams like Cloud 9 have swapped their support in and out. Those of us playing Fantasy LCS are having a rough time knowing if we can start someone or if that person will be benched. Basically it comes down to having to watch the updates on the website constantly or lose out on points. This issue cost me first place last split, when XiaoWeiXiao was banned from pro play and I didn’t notice until it was too late. What I propose, is that in the event of a disqualification, the team members you have on your roster should get half of their predicted points as a benefit of the doubt. In the event of a team like TL or C9, you should have the option to swap out a player in between day one and day two so that you don’t get screwed. It shouldn’t be that hard to implement, and I think that sounds fair.

Here’s the results from last week, and you’ll notice if you’ve been paying attention, that things were changed a bit after my last post on the subject. 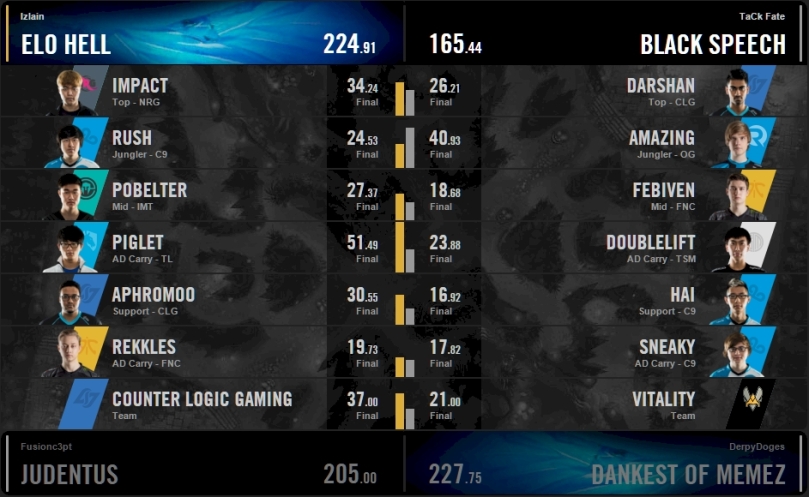 I had Ryu, the mid-laner from H2K in my flex spot, as I wasn’t having much success with the previous flex players. Then, the day before the EULCS got started, it turns out that he wasn’t going to be playing at all, so I plugged in Rekkles, who I had on my squad all last split and gave me plenty of points. This goes against what I had been wanting to do, sticking with all NA players, but there weren’t many other viable options for the flex slot. As you can see, Rekkles had a shitty weekend and gave me the least amount of points of anyone on my roster, but it is still better than the zero points Ryu would have given me. Tacktix also didn’t have a support slotted in, but managed to do so before the games went live. I beat him pretty handily though, despite the fact that Rush still isn’t putting up the numbers he did last year, and Pobelter didn’t do much despite winning both games that weekend. Let’s take a look at next week: 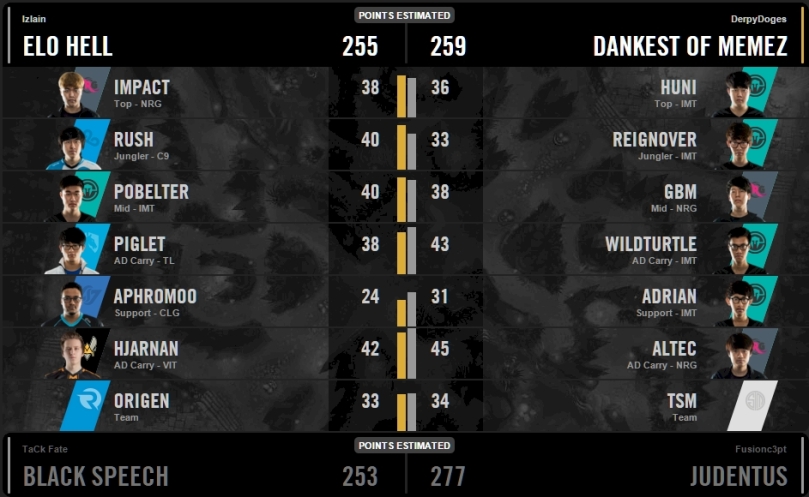 I’m sticking with most of the same lineup. I had dropped NRG for CLG last week because of favorable matchups and that did very well for me. However, this week CLG (and NRG) both had some challenging games coming up, and so I decided to swap out the team for Origen. Their projected points are favorable, but they do play both the worst team in the EULCS and one of the best this week, so I’m not expecting a whole lot. Hjarnan was someone I actually drafted because I remember he put up pretty good points last split, and his historical week-to-week points this split are favorable, but I’m still not expecting a whole lot from the flex spot. I actually picked up Dardoch from TL as well because he put up good numbers this past weekend, but I’m still giving Rush the benefit of the doubt for now. The rest of my squad has been relatively solid outside of Impact, but I still know he’s one of the best top laners in NA, and there’s also slim pickings left over when it comes to that. 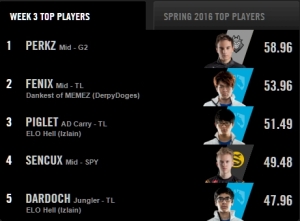 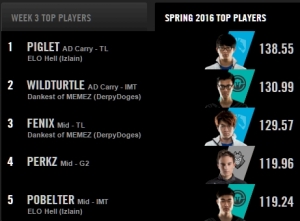 Week 3’s top performers were dominated by Team Liquid, who despite starting off as a 1-3 squad have started to turn things around. I own two of the three players, but as I explained earlier, Dardoch was a recent pickup and is on my bench. Fenix is owned as well, but is also on that players bench, so I was the only one who made the top list with someone in play. I also have two players on the spring split top list (so far) in Piglet at #1 and Pobelter at #5. Derpy has Wildturtle, but Piglet has still out scored him despite the big difference between the 3-3 team and the 6-0 team. Just goes to show having the best team in the league doesn’t mean they’ll put up the most points, which is why I love Fantasy. My big challenge now is knocking Derpy off of his throne, as he is undefeated (3-0) and in sole possession of first place, while I am 2-1 and in sole possession of second place. If I win this week, we’ll be tied for first, but I have my doubts about anyone else’s team taking him out. Time will tell. See you next week.