Finally, after a three week skid, things turned around. It’s fortunate that they did as well, because this means that I’m back in second place! After taking down Judentus in week 7, I entered a 3-4 tie with his team, but I inched ahead in overall points for the split, so I own second. However, with only two weeks of games left before the end of the split, It is currently impossible to beat out our current first place team. If I was to win out, I only have 5 wins, and he’d still have 6 even if he lost out. So it is what it is, but I’m still determined to finish second (again). Summer split will be different. Tacktix was able to pull off another win this week as well, finally defeating Tyvokka, who has been undefeated along with his team Immortals until this weekend. Yeah, Immortals finally dropped a game, and then looked like they might drop a second on Sunday, but still managed to win. They’re still arguably the best team in North America, but they got kicked down a notch. It’s likely that’s the only game they lose, and the same goes for our league member. Either way, things look like they may have turned around and my tinkering with the lineup on a weekly basis has paid off. Let’s see why: 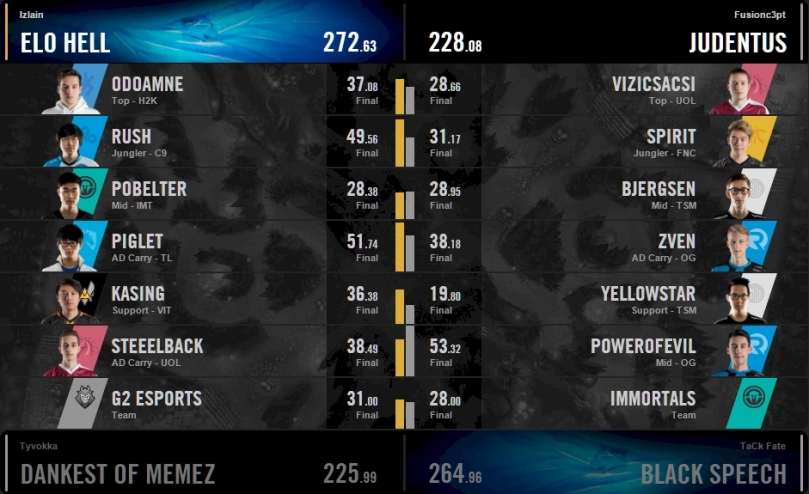 My European players performed decently enough. Considering there were weeks when I had teams give me 5 points, 31 points from G2 is pretty good. Steeelback and Odoamne delivered decent amounts, and Kasing got me a little better than Aphromoo had been, though I still have Aphro waiting in the wings if needbe. Rush had a stellar weekend. Piglet had a better showing that the past couple of weeks. Really the only disappointment was Pobelter, and that’s odd because he’s been consistent the whole time, but makes complete sense given their loss on Saturday. Either way, I still did some tinkering for next week. I either need great performances from these players, or for Immortals to drop another game (not likely given their schedule). 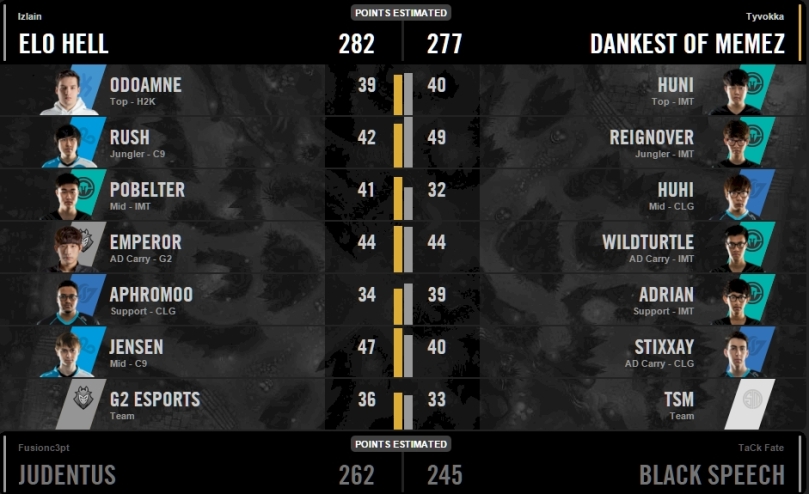 I’m back up against Tyvokka, so basically I’m betting against Immortals, which hasn’t done much of anything for me each time I’ve faced this guy. Still, I have a higher projected total, so maybe I’ll get lucky. I’m not holding my breath. I did pick up Emperor from G2 and Jensen from C9, along with throwing Aphromoo back into the mix just because of his schedule being easier than Kasing’s. I don’t like taking Piglet out (because he’ll probably have a 60 point weekend now that I didn’t start him), but historically Emperor has had more points more often. Team Liquid had a great weekend, but they have had other great weekends this season and they were usually followed by stinkers. I just don’t trust them and want to try for as many wins as I can get before this whole thing is over. We’ll see how it goes. 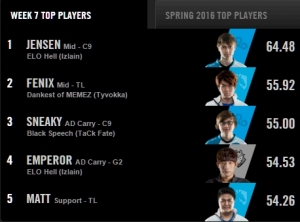 Ironically, the only player up here that is owned and was actually played last week was Sneaky. I own Jensen and Emperor now, and Tyvokka has owned Fenix the whole time but never once played him. When looking at the season top 5, I still own three of the players, but Pobelter was the only one I’ve played (and every week too). Perhaps some of them will stay up there. That’s all the observations I have for this week. See you soon.