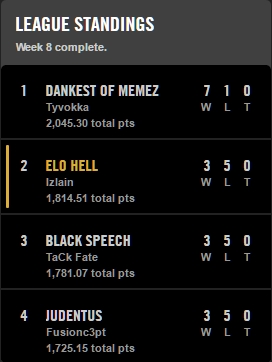 I didn’t forget to post about my fantasy league standings last week — there weren’t LCS matches that weekend, IEM took place instead. I only caught one game of the final, and of course SKT bring home another tournament trophy despite having a shaky split at times. The following weekend, we were back to the normal schedule, so of course this week I have more to talk about, although it’s going to be more of the same. Immortals continue to carry Tyvokka to victory, and that means I lost another game, putting me in a three way tie with both Judentus and Tacktix, but I maintain possession of 2nd place by virtue of the most points between the three of us. It’s funny, that Tacktix was on the bottom of the pile for so long and has now managed to tie for 2nd place, and it’s also surprising that I’m only shy 200 points of Tyvokka’s total despite having lost 4 more games. Tacktix is still the only one who has been able to take him down, but that happened to be the one week were Immortals dropped a single game. His fate has been directly tied to theirs, but rest assured this won’t happen again in the summer split. We’ll keep more of those players away from him next time. Lesson learned. So as we already knew, I’m not going to every get away from second place, though this final week of the split will determine who actually claims it, because a loss to Tacktix would mean I could potentially drop all the way to fourth. We’ll see how it turns out. 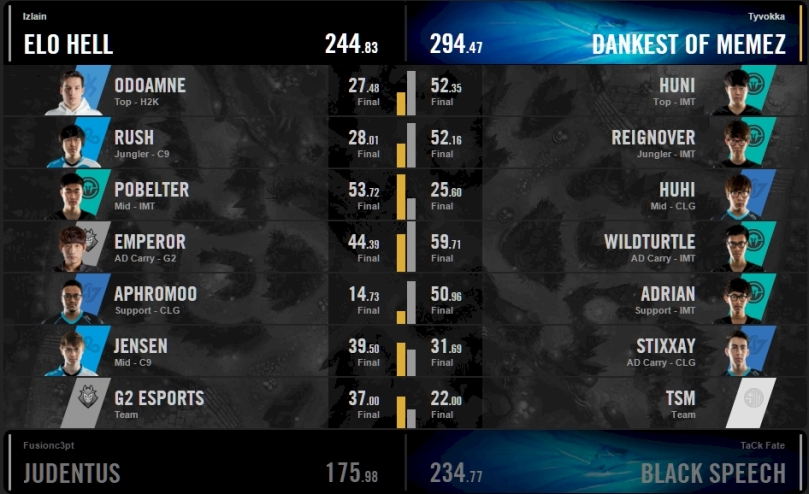 I was fortunate for the bad game CLG had on Saturday, because it kept Ty from totally crushing me. Aphromoo did nothing for me despite trusting him and putting him back in. Jensen pulled his weight as did Pobelter and Emperor, but Rush and Odoamne under performed, But when all five members of Immortals are putting up 50+ points it’s nearly impossible to top. I did make one small change going into next week: 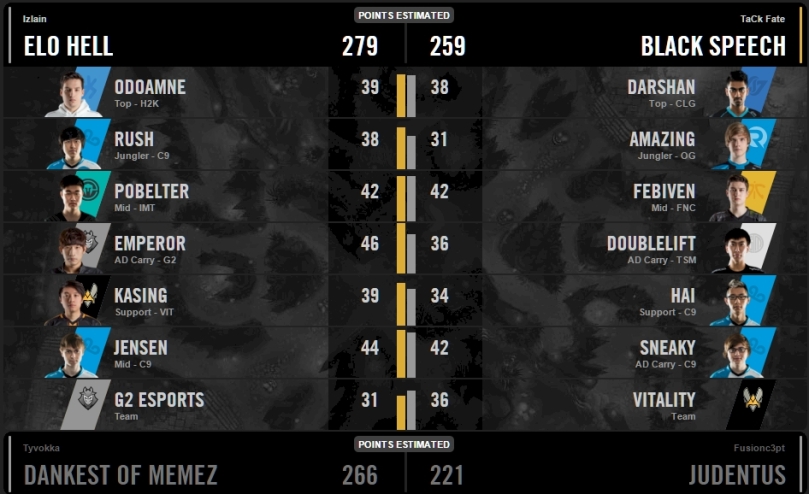 I’m putting Kasing back in due to favorable matchups, and the fact that he did well for me before and Aphro has done shit all split. My projections look strong, and I’ve only lost to Tack once, so I think I’ll be able to hold onto second place. I don’t see Judentus beating Tyvokka, but even if he did I think I will still win the point total tie breaker battle. If so, I’ll have retained my rank from the split prior, and under similar circumstances too, though that time Judentus took 1st place only because he beat me on a point total tie breaker. It will be interesting to see if it comes down to that. With 1st place out of reach, it’s the only thing I have left keeping me interested. That and being able to rub in that Tacktix sucked wind. 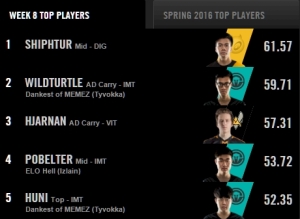 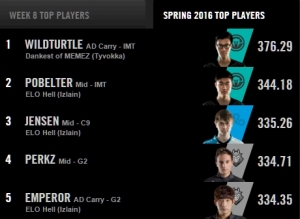 It’s very surprising to see Shiphtur at the top of the points list for the past week, but he did it once before and that’s why I picked him up briefly, but never started him. I also owned Hjarnan and played him once, wish he would have had those numbers when I did. It’s rounded out by Immortals players (no surprise there) of which I still own Pobelter. On the top players for the spring list, I own three, but that still isn’t enough to content with weekly top players. Having those more consistently gets you wins I’ve come to learn. Ah well. Here’s to 2nd place next week!