I mentioned the other day that I picked up WoW again. Yes, I know it’s funny because I’m basically the biggest WoW hater on the planet. Yes, it’s funny because I had pretty much sworn off MMOs altogether, as they’ve felt like the same old shit ever since 2004 when the 2nd or 3rd generation kicked off. I still feel these things, but there’s the little item we all call “hype,” and sometimes it gets the best of yours truly.

A couple of weeks before Legion launched, there was all sorts of hype being generated on my Twitter feed. I don’t blame people for being excited — for many WoW has been their MMO home, despite being tourists elsewhere. For people like me, it was another chance to maybe give a legitimate shot to an MMO that I’ve largely ignored for most of its existence. Honestly, I don’t know why I let myself get caught up in the hype, but I did. There were conversations between me and friends, guildmates, etc, and next thing I knew I subscribed.

It turns out that the last time I played the game was a couple of years ago, and I didn’t get super far with any of the characters that time around. As such I didn’t feel any attachments, so those characters got deleted. From there some of the conversations I had with others steered me towards a PvP server. I rolled a few characters here and there, played a bit and then the Legion launch happened.

I picked up the expansion on launch day, and decided that my boost would be used on a Rogue. 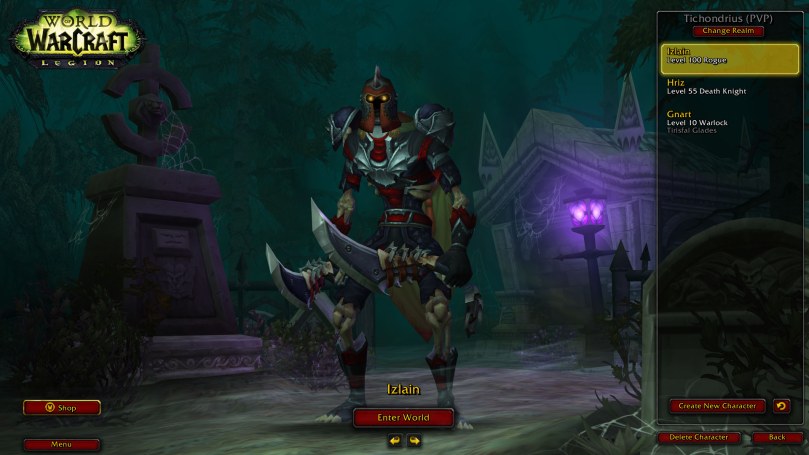 As you can see, I stuck to the PvP server, this one called Tichondrius because it was high Population. Apparently there are more cross realm functions that didn’t used to exist, but PvP has always been fun to me so I knew this was what I wanted. I also created a DK, planned to make a DH as well since they are higher level and I wouldn’t have to do the slog multiple times. I did want to actually level at least one through the game though, because I’ve literally only seen Vanilla content all the way through. There’s several other expansions worth of content I haven’t, hence the creation of a lowbie Warlock.

Not wanting to avoid the newest content though, I decided to play the Rogue I boosted to check out the new expansion. I have to say, it’s pretty cool the amount of story and cutscenes that have been added in this new expansion (probably the last couple but not that I really know). 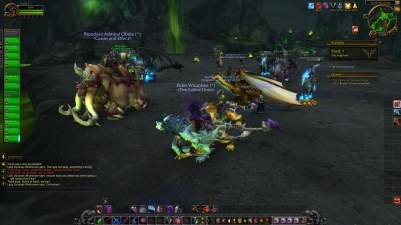 The introduction to Legion was fun. A raid style story introduction that gets you into the action without having to really understand the backstory, though I was tripped out to find a Troll Warchief rather than an Orc, and *spoilers* he gets replaced by a Night Elf. Things are afoot and I’m ignorant to the reasoning. After the introductions its time to get your artifact weapon, and that was a fun little class-specific questline that also introduces you to your new faction.

I loved the epic weapon questlines in Everquest 2, so this was right up my alley. The weapon was  little underwhelming at first, but it seems that you’re stuck with it throughout the expansion. I stuck with Assassination for my build since that’s the default and I couldn’t be assed to go figure out how to switch specs, so I ended up with some wicked looking dual daggers: 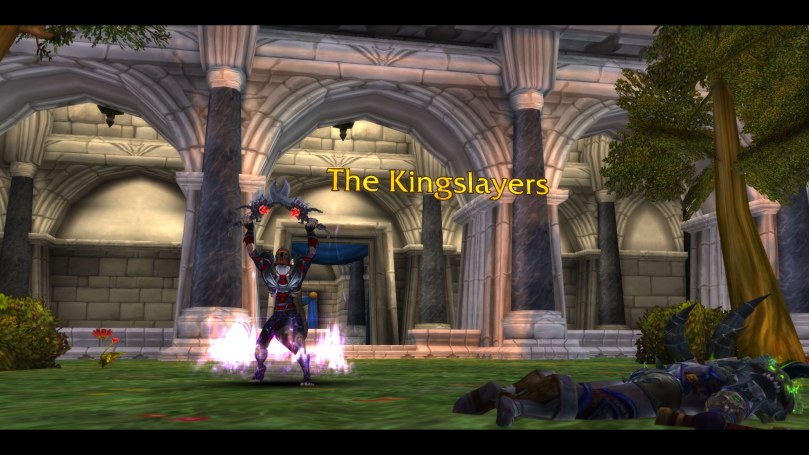 I’m not sure if Assassination is the best way to go, but it does some pretty decent damage. I haven’t tried any PvP just yet but I figure Rogue should be a good choice in that regard. Being stuck with just one weapon seems pretty boring but it turns out that we’ll be able to put points into it and beef it up over time, so that’s one more thing to worry about. 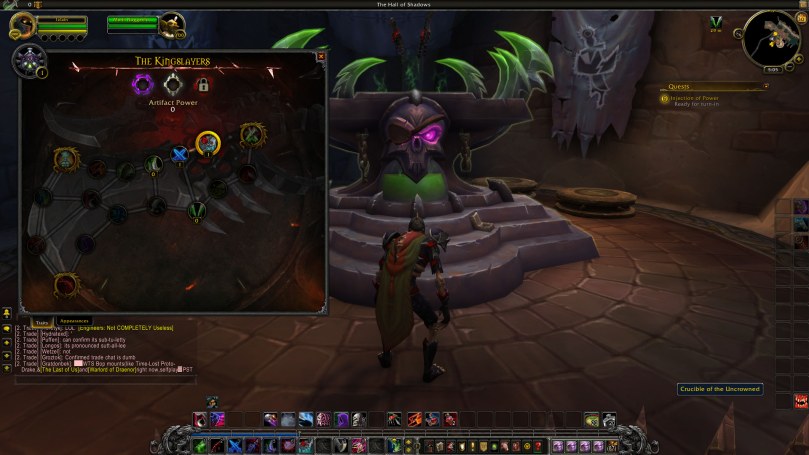 It’s probably for the best since the skills have been so streamlined, there’s not much on the hotbars. This tree gives access to some extra abilities, and the weapon itself provided a new skill as well. Overall, the beginning of Legion looks good, but I feel out of place. The boost is a great concept to level an alt, but when you have never seen endgame yourself, it’s like you don’t really know the class, and don’t really know the world. That part sucks. And in a sense, it pushed me away. I haven’t touched the game in almost two weeks, partly because I’m a busy guy, but also because most nights I’d rather just play a MOBA or something I don’t really have to think about. I’m still subbed, I still own Legion, so it’s there when I want it. But that backlog comes back to haunt me and I also have such a love/hate relationship with this game that I don’t know if it will stick.

I’m going to continue to stay subbed and I think I’ll put more time into leveling a low level character. I need to bring one up legitimately, and then maybe I can focus on the high end stuff. For now, I’m taking my sweet ass time, and I don’t care. Just don’t expect lots of WoW posts from here on out, because I have way too many things I should be writing about and don’t already. Ha.