Another month has passed and another new bundle of games has been unlocked from Humble Monthly. The early unlock for April was The Witness which I already knew wasn’t my thing so I gifted that copy away to my sister. The remaining bits of the bundle unlocked earlier this month, and I finally had a chance to check out some of the pieces of the puzzle. I didn’t play all of the games but I still have thoughts to share, so let’s take a look at the list:

I’m not sure why, but I basically never play any of the Humble Originals. They’re always DRM free copies and I just don’t install games that aren’t via some sort of launcher. I don’t know why that is, but you can bet that I didn’t play Jawns for this reason. Same goes for prior months. I also didn’t play Event Zero which is one of those narrative games that bore me. Slime-San falls into the same uninterested category, as it was a pixellated platformer and I’m just not that into platforming these days.

Layers of Fear looks interesting. I get more of a Amnesia or SOMA vibe to it, but I haven’t played either of those titles despite owning both. If I remember correctly SOMA was in a bundle a few months back. Having just completed Resident Evil VII, I thought it might be worth jumping into right away to keep up with the creepy vibe, but I have yet to jump into it. Still on my to do list.

Black Mesa is a remake of the original Half-Life that is supposed to add some modern convenience along with better graphics to the beloved title. However, it’s still in Early Access and apparently the tail end of the game is not present just yet. I had my eye on this one for a while and wish to play it, but I think I’m going to let the developers finish it before diving in.

Now, on to the games I actually did try out. Kingdom is a cute little side scrolling base management game that came out a while back. I remember friends talking about it and I almost picked it up myself a couple of times. The bundle came packed with both the Classic version of the game, and the expansion “New Lands,” Though having experimented with them both, it doesn’t seem like there’s a whole lot of difference between the two. Let me show you what I mean:

I mean honestly, do you see a difference? All I noticed was that my character went from having light skin to dark skin, and now there’s some clouds. I’m sure it’s one of those types of expansions that adds new stuff, I did notice that the tutorial was more fleshed out in the latter game. Both install and play seperately though, despite not being a sequel. They both had their own Steam cards and whatnot too, so it’s probably more like a directors cut or additional bits added in. You guys that have played more of the game could probably clear that up for me. Overall, it’s a fun little time waster but not a game I’d spend a load of time with. 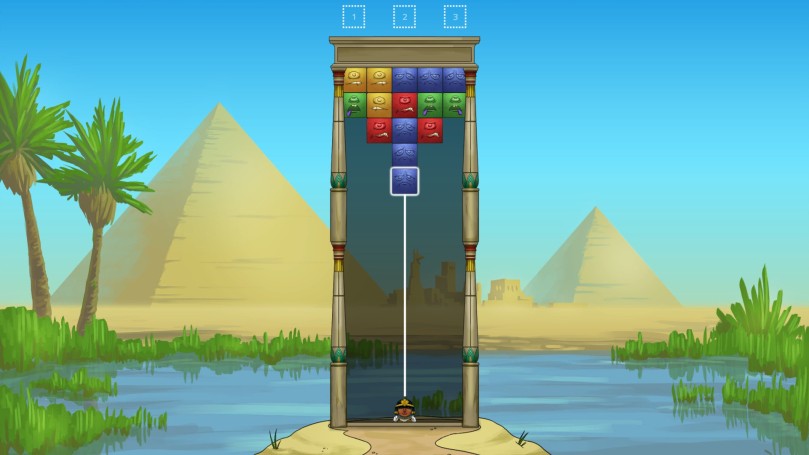 Lastly, a little puzzle game called Tumblestone. It’s got match 3 elements, but you match bricks that are already existing, and don’t add to it. You also have to clear bricks to get to bricks behind them, so each puzzle has one or more ways to solve it, rather than being more like traditional match 3 games where you can add extra bricks and then clear them later. It seems alright as far as puzzle games go but nothing super engaging.

That’s it for this month’s games. The early unlock for next month was Dirt Rally, and if you’ve been paying attention, both Dirt 3 and one of the other titles in the series were free on Humble Bundle’s site over the past few months. So plenty of rally racing to be had. Apparently the 4th game in the series is coming out soon as well. Inside was the other early unlock (two this month, which is different) and it looks like a little platformer with some cool art direction and a mysterious story. I’ll check these out and get back to you next month. Until then.