This week marks the completion of the latest Walking Dead series from Telltale. Regulars will know that I have a mixed relationship with the company, in that I have loved some of their series, but I have become a bit burnt out on the gameplay style as a whole. I couldn’t help but want to see what happened next with Clementine and some of the various characters from the lore who have dotted the series, so I did pick up what could be called “Season 3.” This episode is the conclusion of that series, and as usual, we get to examine our choices made throughout the episode. This time around the concluding episode came with some other interesting stats that I hadn’t seen in other series from Telltale, and I’d like to share my personal results as well. To get things started, here’s the traditional ending screen with the choices from episode 5:

It seems that in most cases, players had similar responses to me. I’m surprised that less people fessed up to being into Kate, and that less people had Clementine stay around. I have treated Clem with the utmost respect throughout the series, and watching her grow has been fascinating. Regardless, the stats are interesting. What was even better was all of the additional information they added in subsequent screens: 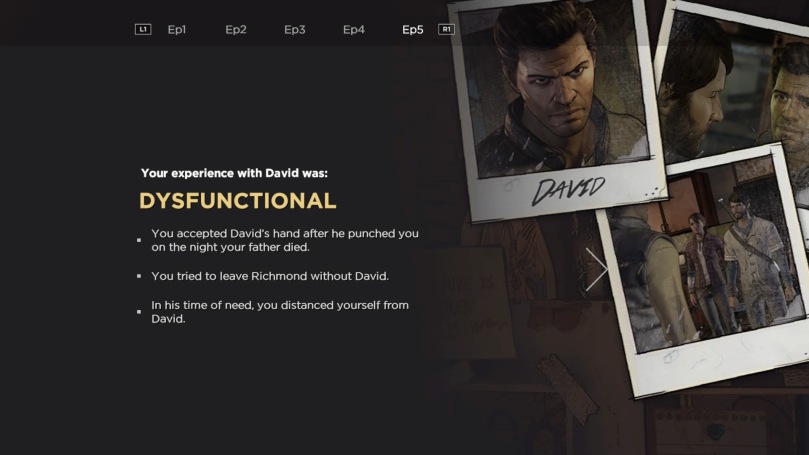 I’m curious what the different results are and despite the fact that I know I could probably Google that shit, I’m not going to. If you have played the game and would like to share your experienced results, comments are open. I ended the game having had a Dysfunctional relationship with my brother. It’s not as if the game didn’t already set that up to be the case, but apparently I kept that dysfunction going. I tried to walk the line with him, but by the end he had proven to be an asshole and died anyway. So I guess the result doesn’t matter all that much in my case, but perhaps other endings exist where he lives. I see in the main header graphic that I used it appears that Kate is a zombie, so perhaps things could have swung another way. 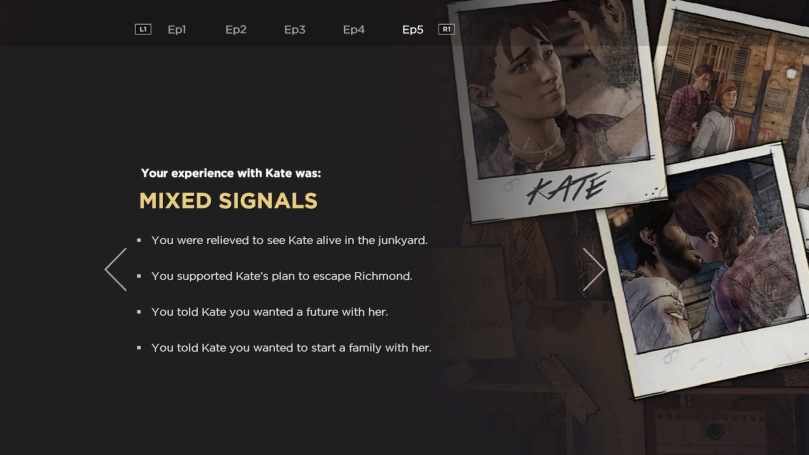 I’m not sure how I ended up with Mixed Signals for Kate. Honestly, I poured it on thick with her while the game was just getting started, and later on I did things as politically correct as possible to avoid tensions with David, up until the point where I finally had to confess, but they were on the road together for years raising kids that weren’t theirs… I don’t know anyone in that situation who wouldn’t have done the same. It’s no different than Rick’s Wife and Shane really, it was the “once the secret’s out” bit that unfolded differently.

Really curious to know how else Clem could have turned out, but I’m proud to have had this effect on her development. The end of the game presented us with a single sentence: “Clementine will Return” or something with similar sentiment, so I think we’ll see another season eventually. How this could affect future developments of the story could be sweeping, but with these sort of curated experiences, I doubt it will be so exaggerated. Perhaps though, these stats will affect something on a grander scale. Time will tell I suppose.

This episode also came with a handy body count, for your reference: 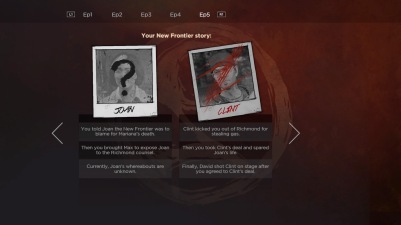 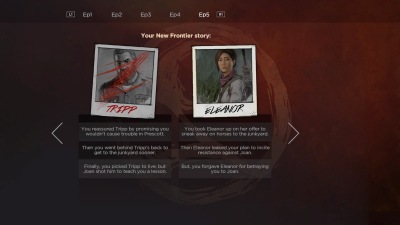 Again, I’m curious to see what others got for their results. If you happen to have played through the game, drop something in the comments!