I remember hearing about The Elder Scrolls Legends a while back, and thinking that it was a game I should give a try at some point. At the time, I was sick of Hearthstone and I had tried Magic Duels but didn’t care for it. I also wasn’t back to playing paper Magic just yet, so I was looking for something to scratch that CCG itch without being one of the games I had already tried or lost interest in. There was a beta at some point and the game has been released for a time, but it recently came to Steam which brought it back to my attention. I downloaded the game and gave it a whirl the other night, and despite some similarities to both Hearthstone and Magic, it stands on its own merits in other ways. 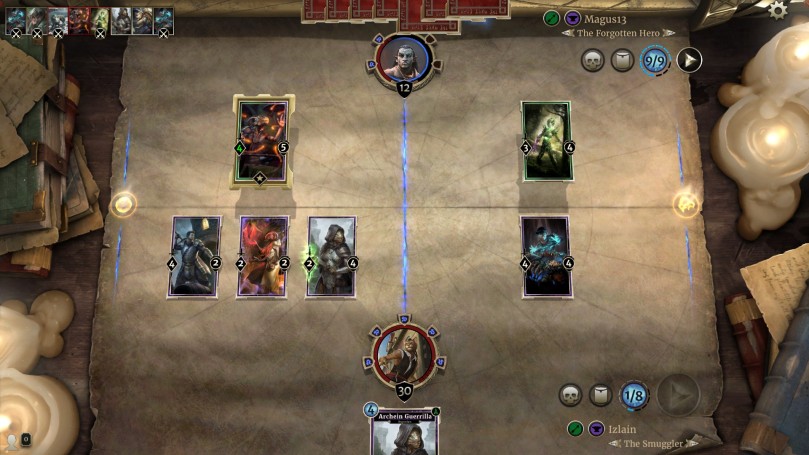 You’ll log in and create an account with Bethesda if you don’t already have one. Then you get to pick an avatar from the familiar races of TES lore and set off into the tutorial where the various mechanics of the game will be explained. Like Hearthstone and Magic, creatures have power and toughness and various abilities that trigger depending on circumstances. Some of the names will sound familiar, others will be new in name only having the same effect that you would expect. Like Hearthstone, you will start with one mana and build up another mana each turn. Also like the coin, there is a ring that will provide you 3 charges of one mana (used once a turn), which is actually pretty damn nice. Most of the enter-the-battlefield effects are what you would expect, but I feel like there are more similarities with MTG in this regard; more effects and spells that do interesting things that I didn’t see during my time in Hearthstone (though I’m sure there are plenty of differences between the game I played and what the game is like now). 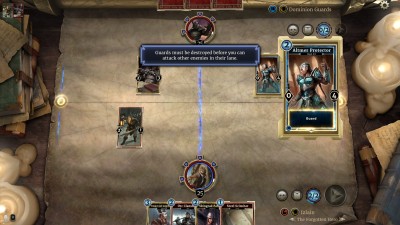 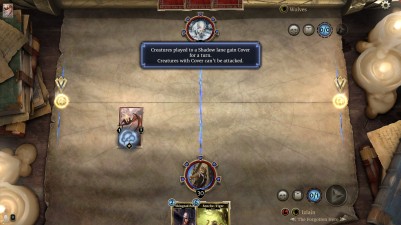 The major differences that I’ve seen thus far is the ability to upgrade cards which feels more like the RDA’s I’ve talked about recently — though it doesn’t function exactly the same. In Clash Royale, you collect multiple copies of a card to upgrade it for a small in-game currency fee. Here you’ll earn upgrades for card that then change into different versions of that type of card — you’ll have a lizard creature that will change into a version of your choice, either offensive or defensive, for example. Not all cards can be upgraded, and I’m not 100% sure how you earn the upgrades, but it’s a neat idea. Another big difference between this CCG and others I’ve played is the addition of “lanes” and effects those lanes can have. You can play creatures in either of the right or left lanes, but you can only attack creatures in that particular lane. At one point the tutorial shows a “shadow” lane which gives units played in that lane “cover” for a turn, which makes them untargetable. It’s a neat idea as well, and I assume there will be other cards that will affect those lane rules but I have yet to see that. One of the coolest differences (and something I wish existed in MTG!) is the runes that surround your character. Each time you lose 5 life a rune breaks and you draw a card. In some circumstances, the card you draw can even be played for free! 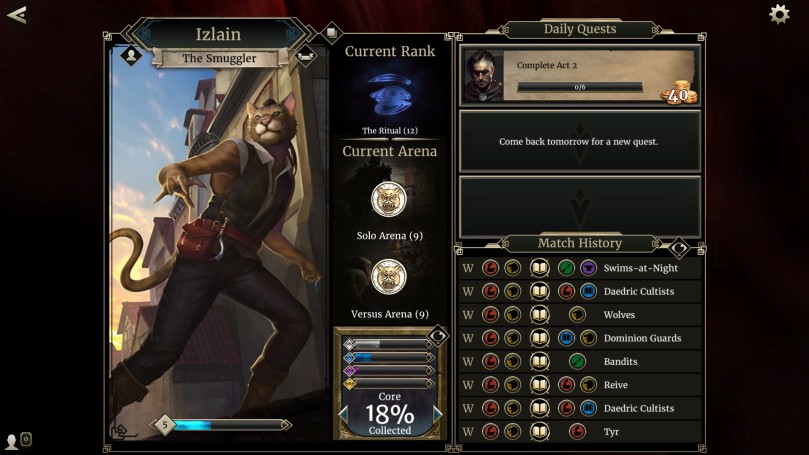 A story is present through the tutorial battles and is apparently something that was recently added to the game, where you can continue this story and play against AI while leveling your account. It’s a good idea to play single player modes to learn all of the mechanics and perhaps earn some cards along the way. Deckbuilding seems straightforward enough, but it more like Magic because you can have a larger deck than the traditional limit of 50 if you so choose. No more having to cut that awesome card, just go over on your deck size!

The store is set up similarly to the other digital CCGs I’ve played. There is a core set and an expansion for the Brotherhood was recently released. You can buy packs for in-game gold or dump a little real money into the game, which I have yet to do but might if I become a little more invested. Prices seem reasonable. Overall I think it’s a very well done CCG and a great answer if you are like me and got sick of what else is already on the market. You can play for free so if this genre is up your alley I’d give it a shot!