I was actually gifted a copy of Killing Floor 2 last year. I had played the original during one of those free weekends on Steam — as a matter of fact I believe it was during one of those gaming events the blogging community used to take part in. I was looking forward to the sequel because I enjoyed the format of the game. Regular readers will know that I enjoy games that are first person shooters, lobby-based, co-op, and have to do with Zombies. Though Zeds have become a bit of a tired addition to gaming for a while, I still enjoy the Zombie survival game modes that have been around for a decade or more. Most famous are games like Call of Duty that had its separate Zombies game mode, or other titles like Sniper Elite that had spin-offs such as Zombie Army Trilogy. The co-op, wave based survival mechanic is not entirely over done just yet, and not having other game modes tacked on keeps things focused.

Generally speaking, you’ll start off by picking a class which are actually referred to as Perks in this particular title. Each perk or class has a particular starting loadout of gear, along with specific weapons they can buy between rounds that are designed for them. Classes will earn more experience by staying within their weapon group, but everyone has the option of using any gear they see fit. As the perks level up, additional bonuses unlock for that perk, allowing for some nice passive effects. For instance, the class I am currently enjoying most — the Swat perk — unlocks a passive at level 5 that gives him 50% armor for free at the start of the game and that can mean more money in your pockets for that round 2 upgrade.

Game play is standard fare, though I would like to say that the game is beautiful (gory too!) and runs smoothly even on the PS4, and the gun play is top notch. Zed AI is fairly straightforward with each enemy type falling into predictable patters, though the boss creatures are particularly painful. I should note that despite having played this on PC for a bit, it seemed that the player base was rather light so I didn’t get to give it a proper go. It ended up being one of the free games for PS4 this month via Playstation Plus however, so I got on my friend to download it and we have been playing it for the past few nights. We’ve been having a blast, and despite not being all that great at shooters, he has been holding his own. It helps that you have a team of 6, and as long as everyone is paying attention you can all help each other out. Typically no one dies until the boss fight, even on the longer round matches. I assume you wouldn’t want to move onto the harder difficulties without leveling your perks up a bit first though.

I’ve earned a few of the trophies thus far, and most of my screenshots will reflect that, though it’s pretty cool how some of them turned out, because the PS4 automatically saves a picture when a trophy is earned. There are quite a few cool action shots as a result: 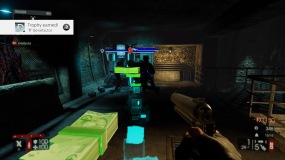 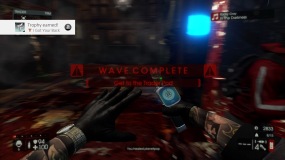 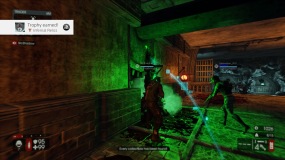 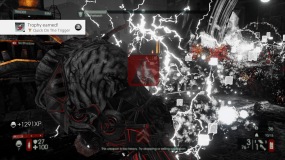 I also happened to remember to save a video clip after finally getting a boss kill, and thought I’d share that with you all as well. It’s the entire boss battle, so it’s a few minutes, but it was pretty intense and I ended up being the last man standing (though my best friend was the last to fall before I got the killing blow). We did later fight that boss and take him out before he managed to run away to heal (as he did in the video) which nets a gold trophy. At this point I just have to find all of the collectibles on most maps (have the trophy for one) and play many more matches to have won 25, along with leveling a Perk fairly high. Anyway, here’s the video:

If you have a Playstation 4 the game is free right now, so go check it out. If you are a PC only type of person, I can still recommend the game, but you might want to convince some friends to buy in as well, as it seems the PC crowd is fairly small.