The new batch of Commander pre-constructed decks are coming very soon, August 25th to be exact. Like the sets of precon decks before it, there are several to choose from, and there is a general theme. This year’s theme is tribal decks, whereas last year the focus was on four color partner decks and other years have had things like Planeswalkers that could be used as commanders, etc. Bits of information have been leaked over the course of the year for the new decks, and though nothing has been fully confirmed, we know that one of the decks is 5-color Dragon tribal. Cat and Vampire tribal has also been basically confirmed, and the last deck is said to be Wizards. 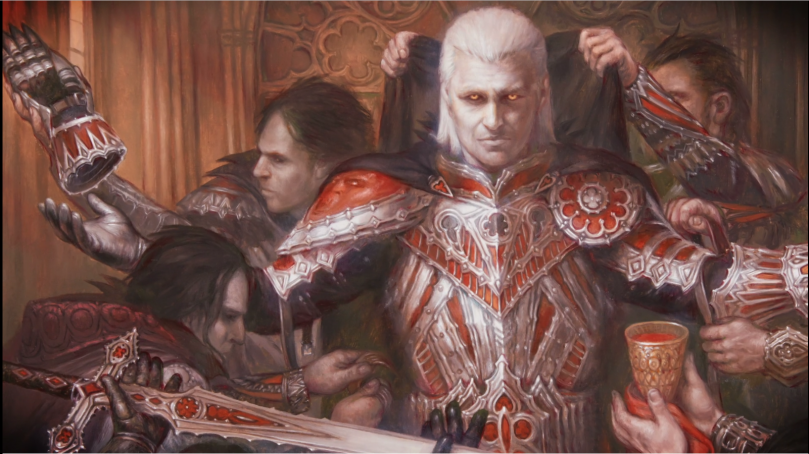 Of these, the deck I am most interested in is the vampire tribal. I have actually brewed a mono black aggro deck that is based around vampires, but haven’t spent the money to buy the cards just yet. When I heard that vampires would be one of the new tribes, I figured I would wait and see what comes in the deck before building the one that I brewed. Word on the street is that the deck will be Mardu (red/white/black) which is a strong combination that I’ve used with Kaalia — and that deck smashes. However when it comes to vampires it doesn’t necessarily feel like the best colors for the job.

I picked mono black for my own brew mainly because the majority of vampire creature cards are black. Black also has a variety of ramp, removal and card draw. Honestly, black feels like the best color in a lot of ways, but I am also drawn to Orzhov (black/white) which adds some additional goodies via white spells, but some of the gold cards that are Orzhov are powerful, and there are some vampire options there as well. Black/red does have some vamps as well, but it seems that the mono red vampires are mostly weak, and revolve around madness quite a bit — which is a mechanic only found in one block.

I’m seeing subthemes here, but I honestly need to see what comes with the precon to see how I want to build it out. I can stick with Mardu and change it marginally as I’ve done with precons in the past. Or I can strip the red out and change the commander to Vish Kal, Blood Arbiter. He’s the only Orzhov Legendary Vampire. There are plenty of mono black legendary vamps, but no mono red and no mono white. I’m assuming that the mardu precon will provide a new commander card because currently there aren’t any mardu legendary vampires. That’s one bit that keeps me from making any decisions currently, because the precons each come with some new cards that have never been printed before. If the new commander is worth keeping the deck mardu then so be it. If he is not, I may run Vish, or I may just strip out the good black cards and stick to mono black.

At this point it’s hard to say which way I’ll go. I feel like the mono black brew I’ve made could be a strong deck, but I am also intrigued to see what they come up with in a three color. Regardless, the next deck I’m going to be working on is this vampire deck, but that won’t be until the end of the month. In the meantime I think I’m going to focus on finely tuning my existing decks as there are still some Hour of Devastation cards that I’d like to sprinkle in, along with some weaknesses that need to be shored up. In particular I want to change around my zombie deck by making Scarab God the commander (which may end up giving the deck a mill subtheme), add Razaketh to Kaalia, and change some of my equipment/auras in Sram. Reaper King also feels like he needs some changes, because he draws a lot of hate and when he is off of the board it feels like I can’t do as much. So for the rest of the month I’m going to focus on those improvements and then work on vampires once I get my hands on the precon.

How do you go about starting new brews?