It’s been a while since the Rise of the Necromancer pack released, and initially I had very little interest in it. Sure, the Necromancer was my favorite class in Diablo 2, and like most people I wanted to see it in Diablo 3, but the Witch Doctor sort of filled those shoes and I enjoyed the class well enough. When Blizzard decided that they were going to continue to add things to Diablo 3 like new zones, a portion of the first game and now a new class it was great to see, but also somewhat disappointing. I honestly thought they would put out another expansion by now, though I suppose the additional zones and features and now this class could count as such, but it would be interesting to see a new Act added to the game.

The Necromancer pack includes access to the new class, provides some other frivolous items like a portrait frame, wings and banner pieces, and a new pet. The pets just run around and pick up gold for you which is nice but not entirely necessary and I can’t count how many times I’ve tried to attack the little bugger running around. Regardless, it seems like a fairly decent value, though I think I would have priced it around $10 rather than $15. Still, breathing new life into a game that is a few years old is nice and it appears that people are still playing it regularly. I’m late to the party this time around, as season 11 started back in July, but I still rolled a hardcore seasonal version of the new Necro:

He looks like a vampire but he really isn’t. Sort of reminds me Geralt from The Witcher as well. As far as the class goes there are some abilities that remind me of the D2 version of it, things like corpse explosion:

It feels much more effective than it did in the prior game however. If you down a large group and fire this ability off it can really start mowing enemies down and creates a chain reaction. The summoning portion of his abilities feel a little more lackluster, but I’m still early in my progression, so perhaps they will improve. The first summoning skill is the ability to procure Skeletal Mages, which were a stable in D2, along with normal skeletons, etc. These are on a temporary timer in this game though, whereas in D2 they were permanent until they died (or they had a much longer timer, I’m not exactly sure). They do some work, killing things much faster than I, but it feels like something you should be able to keep up all the time, so I’m hoping in the later levels that’s the case. I’m not fully aware of all the class can do just yet, but overall it feels pretty fun. 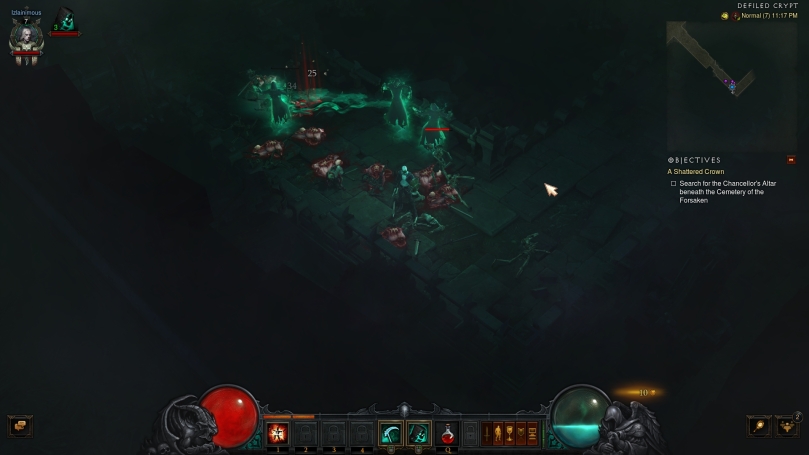 I managed to play for an hour or so last night and decided to play through the campaign for once, just to familiarize myself with the class. I’ll likely jump into Adventure mode sooner than later, because that’s more my speed. If a new season is starting soon I’ll probably rebirth this guy just to be able to run him through a whole season. Earning the rewards is worth it, even if it’s really just more of the same. I will say that they managed to add some bits and bobs that I was unaware of, the last time I played was season 6, so it has been a while. I’ll report more on these as I get more involved.

No matter how many times I walk away from this game, I always manage to come back. It’s elegant in its simplicity and there’s something about zoning out and aimlessly smashing things that tickles my fancy. I’m sure I’ll have more to say about this as I progress, so stay tuned!