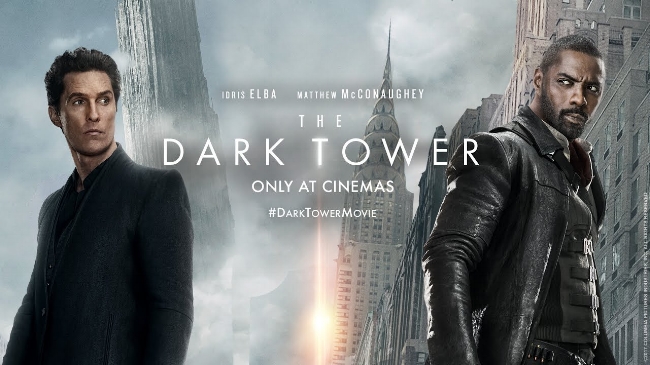 Recently a couple of my fellow bloggers had written posts about The Dark Tower, and now that I have finally seen said movie, I feel like I should jot down some of my thoughts on the experience. First, a little background:

I discovered the Dark Tower series somewhere between when the fourth and fifth books were written, which would have been in the early 2000s. I had a job where I was able to read in my downtime, so I grabbed The Gunslinger (book 1) on a whim, and burned through it rather quickly. I had already read a few of Stephen King’s novels at that point, along with seeing several movie adaptations of his work. The Gunslinger stood out to me as something different than his usual faire, and after completing it I hungrily devoured books two (The Drawing of the Three) and three (The Wastelands) before hitting a bit of a wall with book four (Wizard & Glass).

The filling in of Roland’s past in the fourth book was sort of boring to me. It’s important exposition nonetheless, but I just felt it was kind of a slog to get through. It was around this time though, that in real life Mr. King was involved in an accident and there was rumor that he might retire from writing altogether. Fans clamored for the conclusion the the Dark Tower series though, and eventually he did finish, writing the last three books in rapid succession. Once the last three books were released I picked them all up and read through each and the conclusion was worth the wait. Wolves of the Calla, Song of Susanna and the culmination of The Dark Tower finished things off and I felt that it was one of the greatest series of all time. I’d put it up there with Lord of the Rings.

So clearly, I am a fan and have read all of the source material. My colleagues who already wrote about the film (along with critics, etc.) noted that they went into the movie with little to no knowledge of the books or if they did read them it had been a long time. This didn’t color their opinion of the film, and honestly I went in with low expectations because I had already heard it was a poor adaptation. With this in mind it was impossible for me not to feel that this was a shitty attempt at making something visual out of these novels.

Within the last couple of years I remember hearing about a potential TV series for the books, and that would have made more sense. There is so much source material that you aren’t going to cram all of that into a single movie. At the very least, they should have just made this first movie follow the events of book one and go about making 6 more movies, and even then it probably wouldn’t have done the story justice, but it would have been better than whatever you’d call this.

The director/writers clearly knew about the source material. They clearly dropped little tidbits that would cause you to remember bits of the books. This could have been a little side tale that wasn’t in the books though, because despite referencing the material they didn’t really make much clear. You’re just thrown into a story that doesn’t make a bunch of sense (though with knowledge of the books you can sort of infer and interpret things that you probably couldn’t without having that knowledge), it moves quickly and it ends so abruptly that you’re left with a sense that the producers ran out of funds and just called the thing done. Even a 3 hour long version wouldn’t have done The Dark Tower justice, and I’m disappointed with the effort.

Sure you can sprinkle in The Crimson King references, the skin-people were I assume the “wolves” from the Calla, very little was made of Ka or Ka-tet, though the whole gunslinger’s motto was a nice touch. The portals were interesting, the Man in Black didn’t feel like the Walter I knew… there was absolutely no mention of Eddie or Susanna who were integral to the story; it just stinks. And though they left things wide open to continue with another movie, I just don’t see how they could undo what they’ve already done. All in all, it’s just not a good movie, despite the performances being well done, the special effects working and whatnot. I’m sure people who never read the books will find it to be interesting enough, but if you read the books you’ll probably want to avoid this stinker.

Here’s hoping that TV series gets the green light so we can get some real detail. I love this series and hope it gets the screenplay it deserves.

One thought on “Thoughts on The Dark Tower”