This month, the big release in the Magic universe was the new “Un-Set;” this one called UnStable. Like it’s predecessors UnHinged and UnGlued, it’s a set full of silver-bordered cards that aren’t tournament legal and are basically ridiculous versions of regular Magic cards. Why would you want to buy cards that can’t be used in sanctioned events? Well, that is a multi-faceted question and answer. See, there are reasons to buy this set but it’s not to make money (I have one of the most expensive cards that is a whopping $7.50). Magic is most commonly played at the kitchen table, and as such it’s a game that can be as casual or as serious as you want to make it. Un cards are silly versions of Magic cards you already know and love, with some extra ridiculousness added on top, and they’re really just for fun. This is why they aren’t legal in tournaments, but you honestly wouldn’t want these cards in sanctioned play because some of them are seriously busted! Throw out everything you know about Magic, because these cards break the rules!

There are several unique and desirable cards that you might want in your collection, and the real chase cards seem to be the full-art lands which are beautiful. Another new addition this time around are foil tokens, some of which are full art on the reverse side with no text or borders, and they simply look amazing. If nothing else, you will have these types of cards that can be used in your Standard/Modern/EDH variants and up until the middle of January, all silver-bordered cards were declared legal in EDH so my playgroup decided it was something we should pick up. The guys already had some cards from the older sets (and picked up some UnStable) and already splashed some into their EDH decks. I hadn’t jumped on board just yet, but we discussed doing a sealed event ourselves, so we all purchased 6 packs of UnStable and are creating 40 card decks from those packs, like you would do at an LGS. Let’s take a look at some of the cards I pulled and the unique cards you might find interesting from the set:

I was fortunate enough to pull some of the most expensive cards from the set, though I’m not really into the whole economy of the game. I’ve made some lucky pulls over the last year + and have acquired several expensive cards that were worth more than the packs I paid for (not to mention those I bought from websites like Card Kingdom, which have since increased in value). You never really know how the market will fluctuate though, and since I’m not selling anything it’s not as if the monetary side of things really matters. But still, I do get a sense of “getting my money’s worth” from pulling cards that are worth more than the packs themselves. Urza, the Planeswalker card above is one of the most valuable cards in the set, as is the Sword of Dungeons & Dragons. Super-Duper Death Ray isn’t normally worth much but I managed to pull a foil version so it’s worth a couple bucks. Basically those three cards are worth almost what I paid for my 6 packs, so I consider it a worthy investment with them alone. 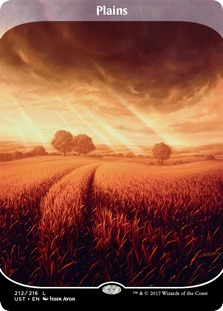 The big draw are these amazing full-art lands. I managed to pull two mountains and plains cards, along with one forest and one swamp. I didn’t pull an island yet, but I’m thinking I might pick up a few more packs before the print run is over just to get some more. They look so much better than any lands ever printed in my opinion, so I wouldn’t mind pimping out a couple of my EDH decks with all full-arts from this set. These run a couple bucks a piece, so it’s almost worth it to just acquire them in packs, as one comes packed in each. 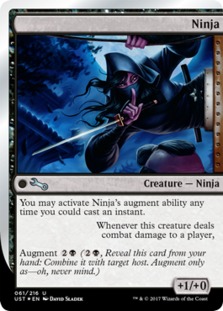 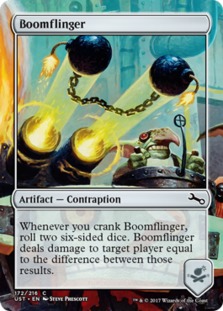 There are some crazy mechanics in this new set, some of which we’ve never seen before. There are host creatures and augment cards, which essentially act as meld cards which we’ve seen before, but basically the host creature enters the battlefield as normal with some sort of ETB effect. Later, you can pay an augment cost on the other card (Ninja in this example) and “attach” it to the host creature. In our example here, you’d have a Ninja-Man, which really isn’t that silly, but combines the two cards into one. So whenever our Ninja-Man does damage to a player, you get to draw a card. Of course there are plenty of options throughout the set so you can get some whacky combinations. There are artifacts and other cards like Kindslaver that allow people from outside of the game to interact, which is cool if you have people watching the game (probably better if they understand how to play though). Lastly, they have added contraptions as a secondary deck that you use while playing UnStable, and it’s a mini-game of its own. Certain cards will reference creating contraptions, at which point you’ll add that to a sprocket (which are printed on the backs of the contraptions). Eventually you’ll have to crank your sprocket, and then the contraption will cause an effect. This can probably be honed to great effect, though we are playing by sanction rules, so you just get to use what you have, duplicates included. 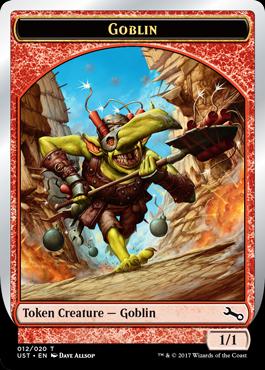 As I said, some of the tokens are pretty nice. I pulled a few that I would have never used, but ended up being able to trade for those I could use. I traded away two Saproling tokens for a Goblin and a Vampire, both of which will go into their respective EDH decks. Having nice looking foil or full-art tokens is awesome and feels like an upgrade for those decks, despite not having any sort of real impact. I’m looking forward to our little sealed event, and potentially utilizing some of these cards in my EDH decks while it’s still legal to do so. I’ve included my sealed 40 card deck list here for posterity:

That’s all for this edition. Until next time!