In just a couple of weeks a new Magic set will be upon us! Rivals of Ixalan is the 2nd set in the Ixalan block, which like it’s predecessors will continue with themes built upon when we first visited the plane, but also adds some new mechanics. We’ll still be focused on the Dinosaur, Pirate, Vampire and Merfolk tribes; there will still be flip cards, enrage/explore/raid, but also new mechanics like Ascend, which adds benefits to certain cards when its controller controls ten or more permanents. Rivals of Ixalan releases on January 19th, though I find it unlikely that I will be attending the pre-release this time around. However, the full set has been spoiled and I wanted to take some time to look at some of the cards I’m most anticipating, both to finally build some EDH decks around these tribes, but also cards that will be useful in other decks I’m building or have already created. Magic is constantly evolving, and I love seeing these new cards and finding interesting ways to use them! Let’s get started: 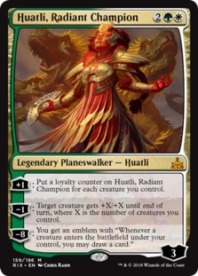 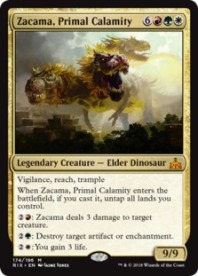 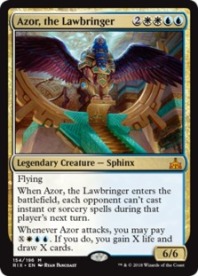 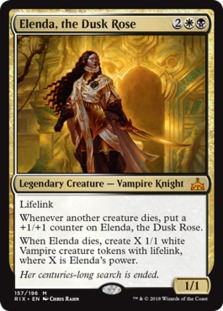 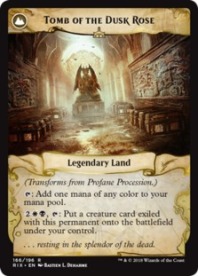 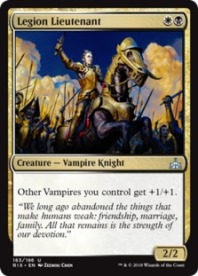 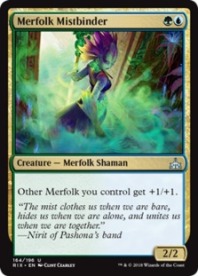 The largest chunk of cards I’m interested in are multi-colored. This tends to be the case with many sets due to the fact that most of the time multi-colored cards are better than mono-colored, but also the Planeswalkers and Legendary creatures tend to be multi as well. Here we see the two new Planeswalkers added in Ixalan in new forms, though Angrath is still in the same color pool, while Huatli is now G/W instead of R/W though he’ll still slot right into those Naya (R/W/G) decks. I was purposely holding off to finish my Dinosaur EDH deck for this set to release because I knew more dinosaur cards and support cards were coming, so after I collect these cards I’ll have a better deck for it. Many people were hoping for a 5-color Legendary dinosaur, but I’m glad they stayed with the Naya theme because I think Gishath is still a better option than Zacama, though I’m definitely still slotting the elder dino into the 99. They also threw in some Vampire and Merfolk love in the form of two more cheap lords, so the Simic (G/B) deck I’m building is getting some love, and I’ll be able to slot a few more cards into my Edgar Markov deck. Azor is going into the sphinx deck I’m building, and the lone flip card I’m really interested should slot nicely into my Cleric deck. Overall there’s some decent additions here. 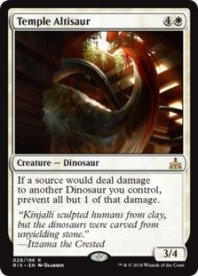 An elder dino, a vampire tutor on the cheap, damage prevention and exile in white. This is almost all dino deck related but some powerful utility, and that tutor is sweet for Edgar. 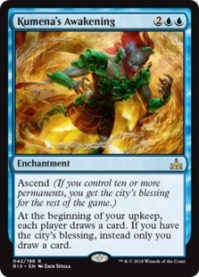 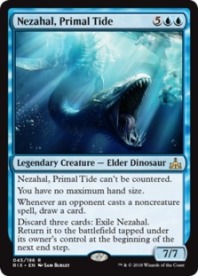 Another elder dino that can’t be used in my EDH deck. I feel like Nezahal is a shoo-in for a new deck, and mono-blue is something I have yet to do. Will have to put some more thought into that one. Otherwise we have some new merfolk (I didn’t include them all here, but they were mostly basic) an enchantment that is a group hug until you get the city’s blessing, and a tricky pirate that I’m thinking will go well into my Kess deck for the extra turn synergy.

Surprisingly little black I’m really stoked for, but black wasn’t really hitting for me on this plane. I do like the trickery on this Aura and will be throwing it into Taigam because it’s on theme. The Chupacabra is a smaller and cheaper Noxious Gearhulk, which I think would be nice in Marchesa with her recursion abilities. Finally, the Twilight Prophet has a really nice extort ability if you have the city’s blessing, and it’s fairly easy to produce ten permanents in a vampire deck. 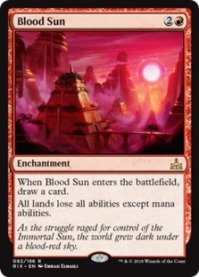 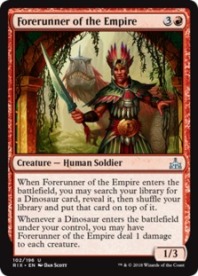 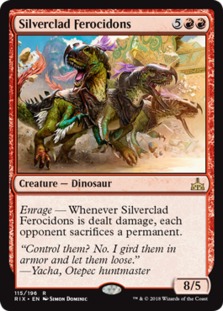 A different version of the Blood Moon, the Blood Sun gimps certain lands but doesn’t make the non-basics into moutains like its brother. I think that for added redundancy, I’m throwing the pair together in my Goblin deck. Otherwise we have a bunch of dinos that have various abilities that synergize pretty well, and a cheap dino tutor that mirrors the others in the set. The Forerunners are a nice addition, each of these four tribes getting their own tutor in colors that don’t always have the luxury. 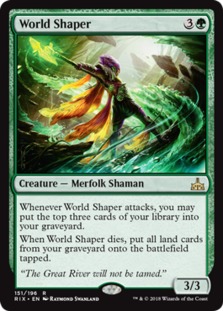 Green is also dinosaur heavy, but there are a few good merfolk to boot. I like the color-shifted tribes, it makes building my Simic merfolk deck possible. World Shaper is neat because it mills you but then when it dies you get a big mana influx. The Ranger is also pretty neat because it explores twice, which can ramp or get you card draw, both of which are important in those colors. I think the Polyraptor can be busted, and I’m looking into the best way to do so. 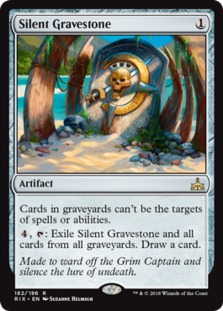 Only a couple of artifacts really interested me, mainly The Immortal Sun, which totally fucks over Planeswalkers (Superfriends decks beware!) and I’ll be putting that in my Oloro Pillowfort build. It’s good all around because you get extra card draw, cheaper spells and +1/+1 to all of your creatures, so it literally could go into any deck that doesn’t use Planeswalkers even if you won’t be fighting them. The Silent Gravestone is a nice bit of graveyard hate that can go nearly anywhere as well, unless you are focusing your energies on the graveyard then you should probably avoid it.

Overall I’m really looking forward to the set and finishing off some of my works in progress!