I caught wind of a flash sale on PSN this weekend, where a couple dozen random titles were pretty heavily discounted and saw one little gem that piqued my interest. Has-Been Heroes is credited to the same company that created the Trine series, of which I played the first two. They were fairly enjoyable-yet-linear adventure titles that focused on a trio of characters with distinctive abilities, and all of them depended on each other to complete the series of levels. This game has a touch of that same all for one and one for all sensibility, but repackages it in a completely different sort of game.

The game comes packed with a few different features, some of which I don’t quite understand yet. The Prologue is the tutorial that changes into the campaign mode after completion, and in true rogue-like fashion, when you die you have to start the quest over again. Challenges are runs set up with special rules, and I haven’t tried that out yet. The Epic Quest is also something that elludes me to this point, but appears to have something to do with collecting some sort of arch-portal things. You start the game with the three heroes pictured above, but by the look of the Heroes page, there are a ton to unlock: 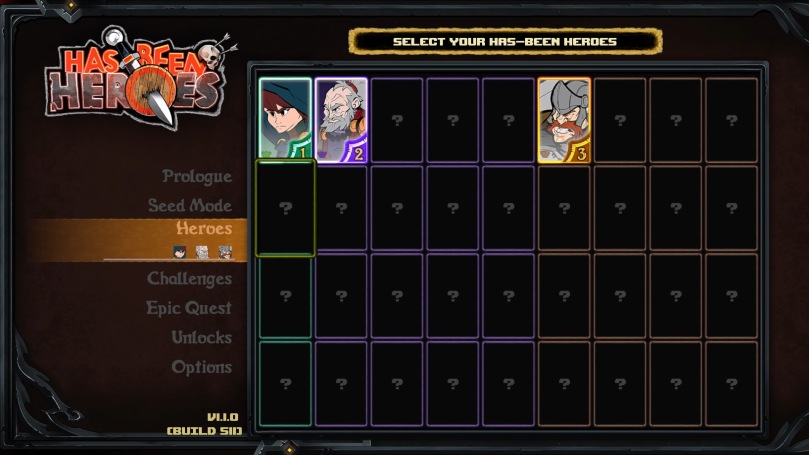 I honestly don’t know how these other characters will be unlocked, but after seeing what the base characters do, I’m ready to try out some new ones! The game has a cartoon or anime style look which I rather enjoy, and the gameplay is smooth and responsive. This isn’t the sort of rogue-like title where it’s an Action-RPG level of twitchy fighting mechanics, rather think of it being more akin to Darkest Dungeon. Real-time and turn based elements are present, and at times it almost feels like you’re playing a rhythm game based on the button combinations pressed in rapid succession. Thankfully a much-needed pause system allows you to think out your moves at a more relaxed pace but at times you’ll still be feeling the pressure. 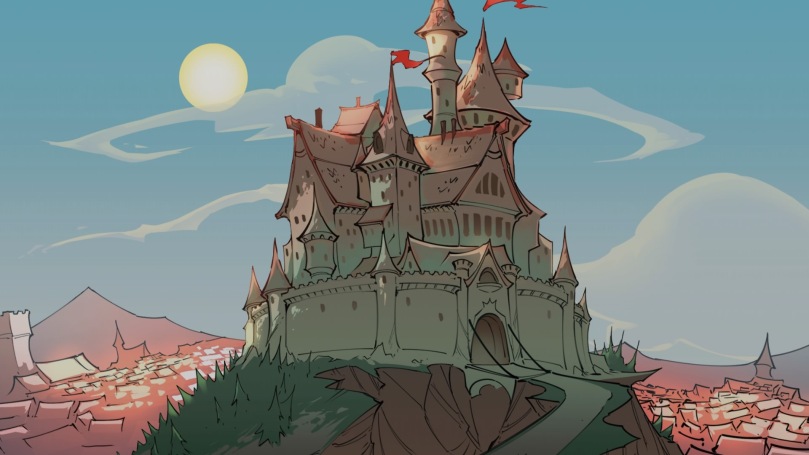 The cutscenes and intro were beautifully crafted and I imagine there are more to come as you complete runs or significant events in the story, but I could just be projecting what I would hope for. If it is only the little bit I’ve seen it’s a nice touch but more of it would have been even sweeter. 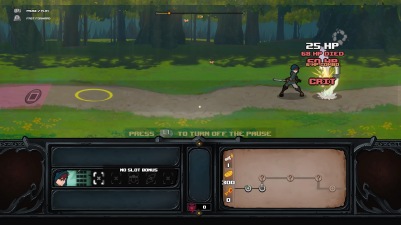 The tutorial plays out simply enough. The Monk and the Knight characters are the so-called “Has-Been Heroes” in that they had retired and were once again called upon by their king. You start off as a young rogue who wants to meet them, and heard the king’s call. You’ll learn the basic mechanics here and then meet up with the old guys who let you tag along to see the king. The king mistakes the young rogue as a fellow hero and lumps her in with the has-beens, forming your starting party. You’re joined by the king’s daughters who need a lift to school. They perform one simple function each: One collects coins while the other collects souls.

Souls serve the function of filling up a meter when you ascend to heaven. Upon reaching the prescribed number you’ll sometimes get a chest that unlocks items that will then appear in the game, which is part of the persistence or progression system for the game (a sort of typical subsystem of rogue-likes or lites of the modern era). 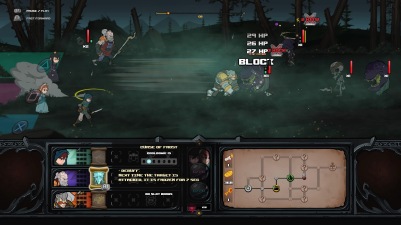 Combat is strange, but it somehow works. Each hero resides in a “lane.” Enemies will appear at the other side of each lane and slowly move towards the heroes. Think of games like Plants vs. Zombies where the enemies can only reach your side of the lane so many times before someone dies. However, the twist here is that only one of your heroes has to die and it’s game over. Kind of sucks and there’s a missed opportunity for resurrection spells, but it is what it is. Speaking of spells, each character has a starter spell unique to them, and you’ll pick up other spells as you clear the map. These can be activated at will, but have a cooldown between uses. Each level would appear to be randomized with different rooms that will have either a various encounter or nothing at all (we’re back to Darkest Dungeon themes here). Some rooms will have monsters to kill and others will provide a boon, such as stamina camps or merchants peddling wares. A key merchant is nice to run into, as most chest rooms require them. You’ll also come across gear drops that can help to boost stamina or provide other effects. Stamina is essentially the amount of hits a character can take, so it’s probably the most important thing to keep your eyes out for.

Eventually you’ll come to the end of the dungeon and face off against a boss. They’ll come with their own sets of challenges, and it gets rather complex using your characters to their greatest affect. Enemies have stamina as well, and you have to break through this “armor” of sorts to do damage to their health bars. Each hero does his own sort of attack as well, for instance the Knight has one mighty swing and the Monk hits two times but for less damage. However, damage doesn’t make a difference when it comes to knocking out stamina on enemies, so you have to perform combos. Let’s say the enemy in your center lane has 2 stamina plus health, you would want your Monk to make the first swing (let’s just say he’s in the center lane for simplicity’s sake) hitting the enemy for 2 stamina damage, then you can swap lanes with the Knight so that he can charge in and do maximum health damage to the enemy (oftentimes killing it). Unfortunately this isn’t always the situation, as enemies will spawn in all lanes and your heroes can only swap lanes during a combo. The game conveniently pauses after one hero hits, allowing any other hero to swap lanes as long as their attack gauge is full (this fills like an ATB meter – read: Final Fantasy Series). So sometimes your Knight will hit a high stamina enemy for only 1 damage, but then you can quickly swap your rogue into place and hit for 3 more, then swap in the monk for two hits for health damage. Once a combo is performed the enemies are either slain or knocked back to slowly charge at you again. Bosses don’t go down so easily though, and I have yet to clear the first dungeon. Doing so I imagine, will open up a new hero.

Overall I think it’s a rather unique title despite clearly having used concepts used in other games as building blocks for their own. I like what the developers pulled off here and I look forward to future runs! It’s on sale for under $5 right now, but I know the flash sale was ending soon so you may want to hurry!