I’ve been brewing this deck for quite some time, and it’s finally nearing completion so I thought it was time to share it. Like the Commander 2017 front-men, Oloro has an Eminence ability that functions even if he is in the command zone. Despite it not having the keyword, this was the first appearance of an Eminence ability which has been furthered in the C17 product.

Recently I have been trying to build decks that function differently than the norm. I’ve built a bunch of tribal themed decks and they all tend to have a go-wide win condition baked in. Each tribe might focus on particular key words and play differently (particularly due to the strengths and weaknesses of certain color combinations) but they all end up trying to win via combat damage, and that gets boring after a while. I have spiced things up with other strategies such as Voltron (Sram), combo (Locust God) and +1/+1 counters (Marchesa) but I’m always looking for new ways to win that don’t rely on combat damage alone. Lifegain decks aren’t anything new, but it seems that Oloro, Ageless Ascetic is a shoo-in to lead this deck. 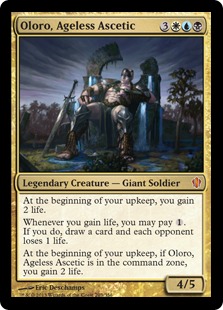 Not only does he have a reasonable CMC for a 4/5 body, he has the eminence ability where each upkeep you gain 2 life for no reason, regardless of if he’s on the battlefield or in the command zone. If he is on the battlefield, you get the added bonus of paying one mana to draw a card and damage each opponent each time you gain life. This means you’ll be gaining life every turn and often times earning some extra card draw and doing some minimal damage. With this in mind, I have built the deck to focus on lifegain in all its forms, while using that high life total to benefit me in other ways including winning the game flat out. 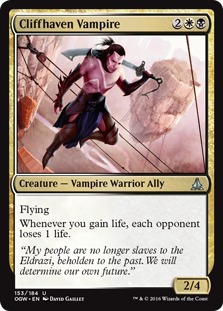 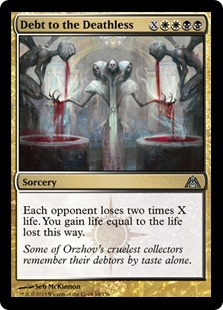 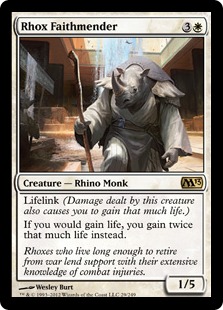 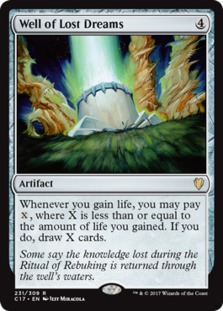 The overall theme of the deck is to gain life as often as possible, and benefit from that life gain at the same time. Creatures in the deck tend to have some ability that will gain life, but in turn many of the creatures will also cause damage at the same time. In some cases I’ll have to gain life for the damage to occur, otherwise it triggers during upkeep or upon an opponent’s action. I’ve also added in lifegain doublers, like Rhox Faithmender and Alhammeret’s Archive that double the amount of life gained. Similarly, Beacon of Immortality will double my life total instantly, and Debt to the Deathless will do X damage to each opponent while gaining me that same amount back. There are also cards like Serra Ascendant, Serra Avatar, and Divinity of Pride that benefit from high life totals. A 6/6 or 8/8 flier for a small cmc due to having this high life total is great, and in the case of the Avatar, it has the same power and toughness as my life total, so it can get huge! Basically no matter what I do I’m gaining life constantly, which means opponents probably won’t be able to kill me via straight up combat, though I’ll still be vulnerable to combo decks that can win without touching me. Still, people are going to want to come at me so that I don’t have an infinite amount of life, and so I’ll be utilizing the “pillow-fort” strategy to try and limit what comes my way. 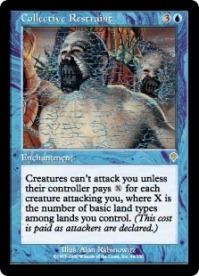 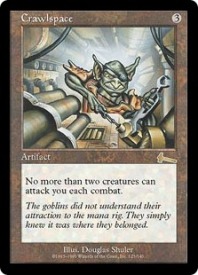 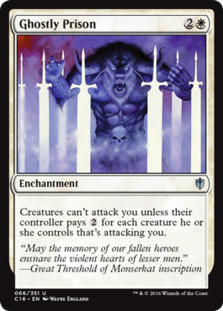 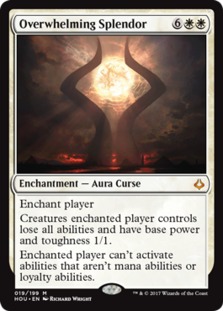 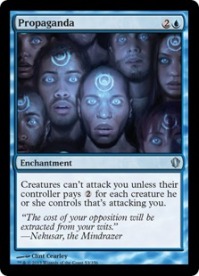 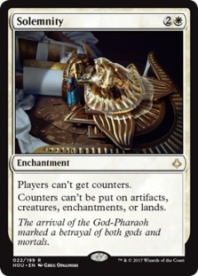 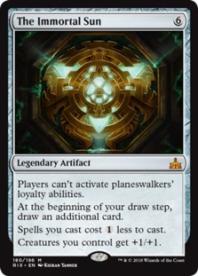 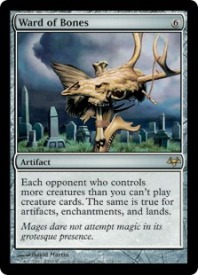 Pillow-fort tactics revolve around slowing down what’s coming your way. This means either forcing your opponents to pay mana to attack you (Propaganda, Ghostly Prison) or limiting their ability to attack outright (Crawlspace), or limiting what they can or can’t do. In the case of Solemnity, players can’t get counters and neither can creatures/planeswalkers. The Immortal Sun keeps planeswalkers from being able to activate their loyalty abilities along with providing boons for myself. So now that we see that I’ll be gaining a ton of life and pinging my opponents here and there while sitting behind my fort of pillows, you might be asking “how the hell do you win?” I’m glad you asked! 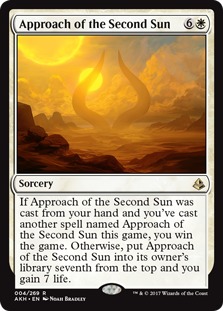 One way to win the game is just by having a high life total and casting a card. In the case of Felidar Sovereign, you only need to cast him and wait until your next upkeep, and if your life total is 40 or more you win the game. The same goes for Test of Endurance, though your life must be at 50 there. Finally, Approach of the Second sun must be cast successfully twice — after the first cast it is placed 7th from the top of your library and you must dig it out and cast it again. You’ll either have to live for 7 more turns or tutor it out. 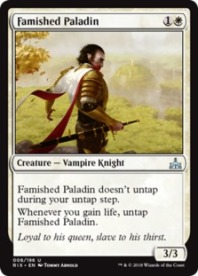 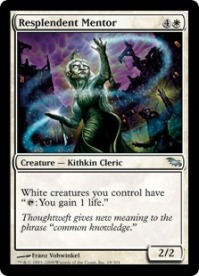 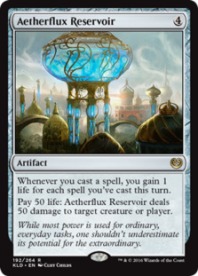 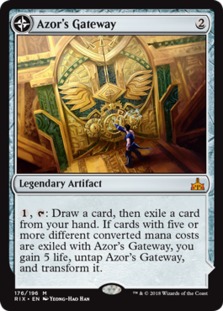 A new combo that was discovered with the release of Rivals of Ixalan is Famished Paladin + Resplendant Mentor. The former card doesn’t untap during your untap step, but does untap when you gain life. The latter gives all white creatures “tap – gain 1 life” meaning that you can infinitely tap/untap the Paladin to gain infinite life (or stop whenever you see fit). You can utilize this life in a number of ways, including the aforementioned win cons, or you can do other things like use Aetherflux Resevoir to one shot one opponent and then do it again to the other opponent the next turn. A more convoluted way to win is using Azor’s Gateway. It’s difficult to flip this card, but when you do it taps for as much mana as you have life, meaning you can use a spell like Exsanguinate to one shot all of your opponents at the same time. It’s not likely that win-con will work all that often, but it’s there nonetheless (and would be fun to pull off!)

Alternatively, you can do fun things with the creatures I’ve mentioned, like Serra Avatar or the larger fliers to pick enemies off, or create a shitload of indestructible horses with the Crested Sunmare. There’s also Phyrexian Processor, where you can pay a large amount of life initially and then use the artifact’s ability to create big creatures to swing with. I’m considering other ways to use life to do things as well, and may edit the deck when I find something viable.

There are other cards on the list that I didn’t mention, you can peruse the full deck list here.