We’re back today with another look at one of the episodes of the Batman Telltale series. Spoilers, I beat the game already but I’m still going to break it up into posts because that’s how I’ve always done it and it’s blog fodder if nothing else. I have been steadily increasing my output here on the blog over the last few months and posts like these help, even if they aren’t the longest (or most entertaining?). I have to say that I actually ended up enjoying the series — enough so that I’m contemplating picking up the latest chapter Batman: The Enemy Within. I suppose this one just took longer to get going, but being able to binge the whole season without waiting a couple months between episodes is akin to binging a Netflix show over a weekend — things stay fresh in your mind and it keeps you hooked because you know there’s more to play through. Here are my choices for Episode 3: 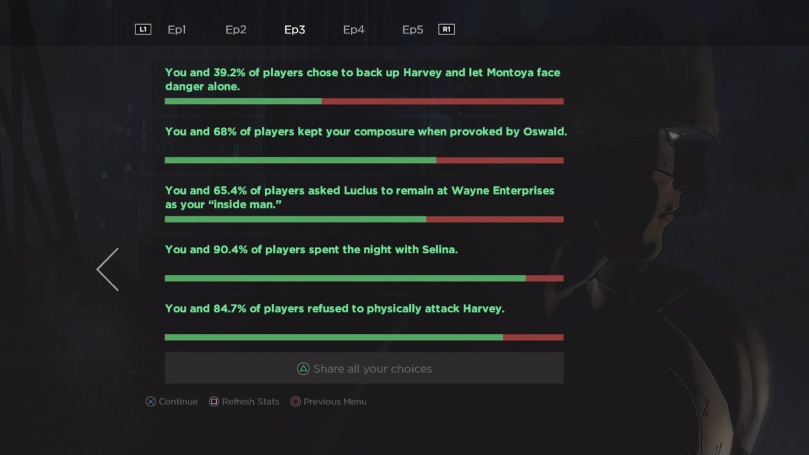 Montoya was suspended due to some things that happened that I won’t spoil, but went after a lead on her own (going rogue) but Harvey was being attacked by the Children of Arkham and I had to choose where to go first — I stuck with Harvey.

I can’t really discuss some of these other points without spoilers, but I guess since the game is pretty old it shouldn’t matter. Basically, Bruce gets voted off the board and his position as CEO of Wayne Enterprises and somehow Oswald is put in his place. He provokes you in the process but I was able to keep my cool.

Lucius was impacted as well, wanted to leave and work for me at the manor, but I convinced him to be my inside guy at the Tower. This ended up being a boon later.

Finally some action came my way via Catwoman, and I was unable to refuse her charms. I spent the night which included some extra curriculars.

Lastly, we got busted by Harvey. I tried to hide out in Selina’s room, but the damn cat wouldn’t leave me be so Harvey saw me and flips out. His “two-faced” nature starts to show, but I still didn’t attack him. He ended up leaving a shattered man.

Things were starting to heat up in this episode, but it really starts to get crazy as we head towards the climax. I’ll have these posts finished up by the end of the week so we can share the conclusion!