Despite finishing up my playthrough of this title last week, it’s been fun spending some time going back over the events in my mind this week. I love being able to share gaming experiences whether they are bad or good, and in the case of this game, they were pretty good! Let’s run through my choices for the final episode, shall we? 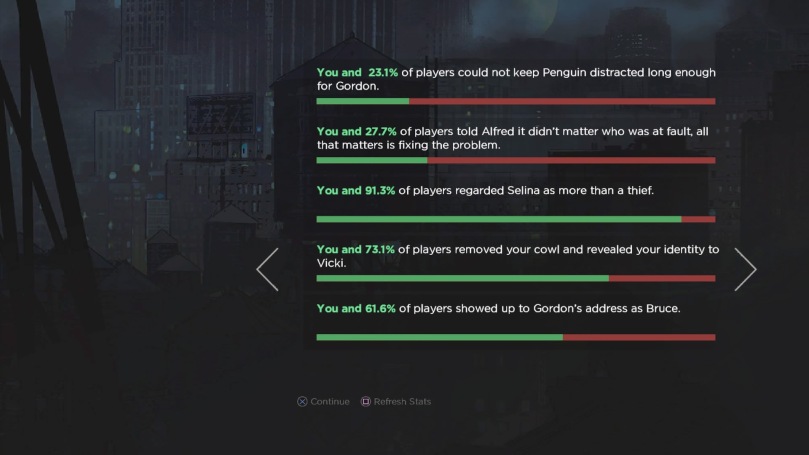 As the episode opens, it seems that Penguin has set a trap for Batman, but I end up going as Bruce Wayne. At Cobblepot Park, we meet the masked menace again, but this time he’s got a trap set and Gotham police are taking the brunt of it. Gordon can’t seem to get close enough to make an arrest, so I offer to go in. Unarmed, I approach Penguin and start up a conversation trying to make a distraction for Gordon, apparently I failed at this, but it didn’t seem all that detrimental to the plot.

Later, there is some exposition between Bruce and Alfred, and he is expressing his regret for not pushing Bruce’s father into a better life, and not telling Bruce the truth earlier, etc. I reassured Alfred, and said that none of that matters, that we have to save Gotham. A very Batman like thing to do I suppose.

Selina is leaving town, but not before stealing some Wayne Tech from me. I confront her, she gives it back, we have a little moment where I tell her she’s more than just a thief, and she rides off into the sunset. Not much of a happy ending there.

During the final confrontation with the leader of the Children of Arkham, down below the building itself in some hidden chapel, Alfred has been captured and is being tortured. In order to set him free I reveal my true identity and remove my mask. The villain would have left with this information but ends up being smashed by falling debris before my secret could get out.

Gordon is now the interim Commissioner, and at the end of the day he is giving an address to the city and I have a choice to go as Bruce or Batman. Given the fact that Bruce’s reputation was shit on this whole series, I went unmasked to try and raise that reputation again.

I’m curious to see how these choices might tie into the new season. I will likely pick that up at some time, but I’m not in any rush. It’ll probably go on sale sooner or later (maybe by Summer?). If I do, you know I’ll have more to share and will do so here. Stay tuned.